2022 is another big year for vinyl. After all, vinyl sales has risen by 22% during the first half of the year.

Before we go and prepare for the holidays and end the year, altogether, let us give you guys a recap of the vinyl sales for this year.

I’m pretty sure you already have a clue of who’s in the list, but I bet you’ll still find the list surprising. 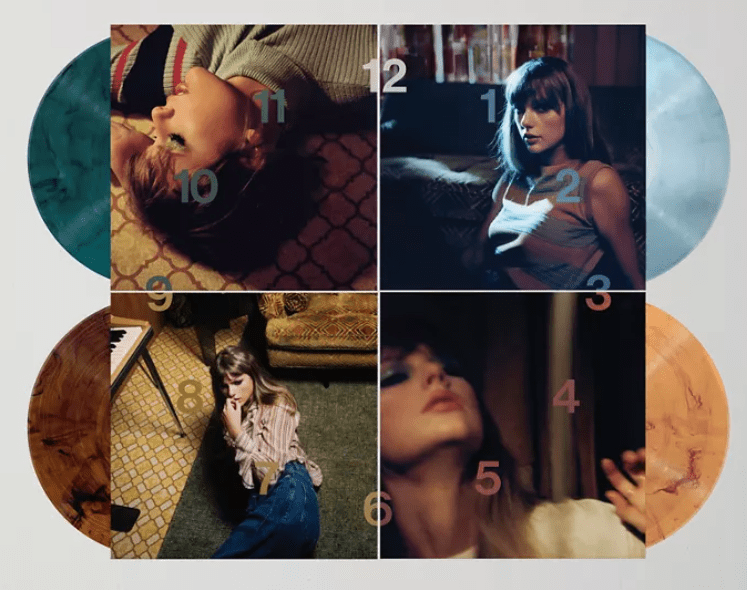 After two consecutive releases of past albums, namely: Fearless and Red, in “Taylor’s Version”, the world renowned singer-songwriter has come back last OCtober 21 with a new one titled Midnights.

The album’s standard edition consisted of 13 tracks while its 3am edition had an additional 7 tracks.

For the Deluxe CD release, it included a string remix of the track You’re on Your Own, Kid and a piano remix of Sweet Nothing. It also includes Hits Different, a CD-only track. So, if you want to hear it, you have to buy the Deluxe CD edition.

Aside from the different editions of the album itself, Taylor’s Midnights also has different vinyl record editions released.

The first four editions included the 13 tracks from the standard album edition, 1 out of 4 single jackets with unique front and back artwork, and 1 out of 4 printed inner sleeves.

In addition to these 4 versions is the Lavender edition which had 3 tracks added to it on top of the 13 tracks and can only be bought on Target’s official website.

Given the artists popularity, there is no need to assume because they sure are, without a doubt, selling like hot pancakes. In the first week of its release, the album has already recorded more than half a million vinyl record copies sold. 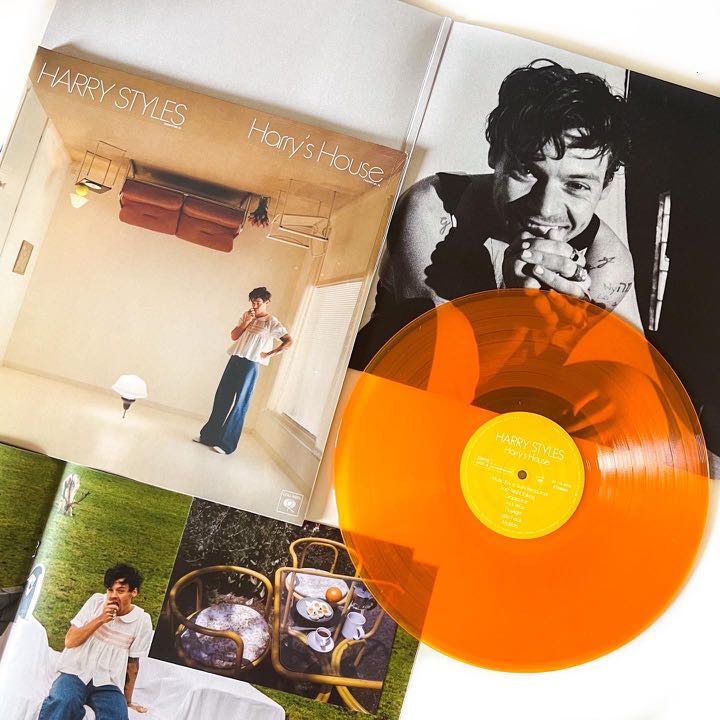 The former member of world famous English-Irish pop band, One Direction came back with his third studio album Harry’s House last May 20.

This is Styles’ third time releasing a vinyl album all throughout his solo career and he has outdone himself yet again.

Besides the obvious musical growth, there is also growth in his vinyl album sales. From Fine Line selling 28,000 vinyl copies in the first week to Harry’s House selling 182,000 copies for its first week.

For this release, Styles had three vinyl versions, the standard black and the limited editions, one with seaglass green vinyl and the other with orange vinyl.

Styles’ Harry’s House was apparently the highest record for first week sales this year, until Taylor’s Midnights came along. Nevertheless, Styles did great. I mean who can go up to a music legend, right?

#3. C’MON YOU KNOW by LIAM GALLAGHER 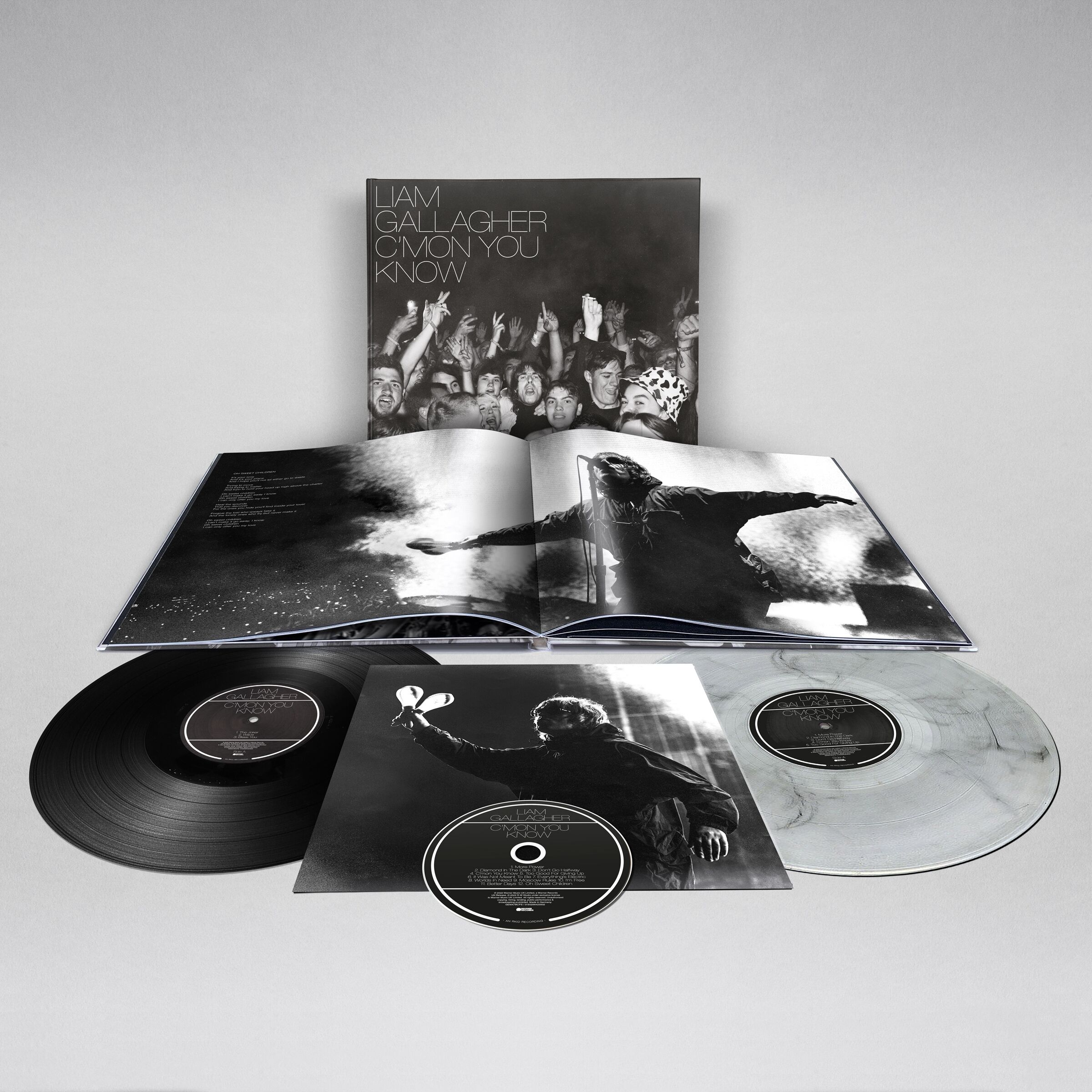 Lead vocalist of the popular rock band Oasis, topped the U.K. Albums Chart with his studio album C’mon You Know, released last May 27.

His chart sales were at 70,000 for the first seven days of his release, which included 29,000 units of vinyl album.

The vinyl release of the album came in 5 different versions. The first two are the standard black and the bundle exclusive, which are both available in the artist’s online store.

The other three versions are all store-exclusive.

The red colored vinyl is available only at HMV store and the clear vinyl is only sold at independent record stores. And the last version, the zoetrope picture disc, was sold through Blood Records.

It topped the Official Vinyl Albums Chart with 12,387 copies sold.

There has been a variety of vinyl records the Irish post-punk band has released for this album. It had the standard black vinyl and also a blood red colored vinyl available in the band’s online store.

There is also a deluxe double vinyl offered in the store to fans. There are no additional tracks but there is an increase in sound quality due to lesser tracks on each side.

The indie exclusive version is in color yellow and the zoetrope picture disc is sold in Blood Records, same as Gallagher’s C’mon You Know.

#5. THE OVERLOAD by YARD ACT 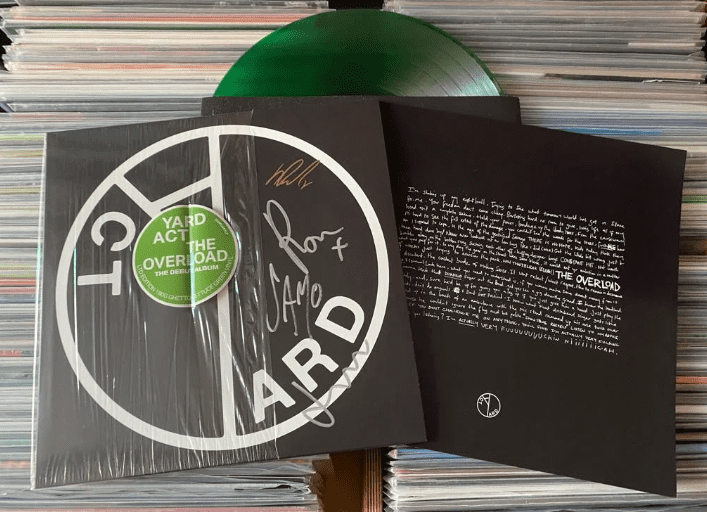 Yard Act’s debut album Overload was released on January 29, before the first month of the year ended.

It came as a shock to everyone when it made them a contender for the number 1 spot on the charts.

There were apparently six vinyl versions of the album. There was the standard black, transparent green, rich yellow, gray, white with green wisps, and red with a black center. Two of the versions are available on Yard Act’s website.

All these versions contributed to the overall sales of the album. It accounted for 50.2% of the sales which equated to 8,761 vinyl album copies sold.

Though they couldn’t snatch the top spot for the Main Albums chart they did not disappoint by claiming the spot for the Physical Albums Chart, the Vinyl Chart, and the Record Store Chart.

#6. THE TIPPING POINT by TEARS FOR FEARS 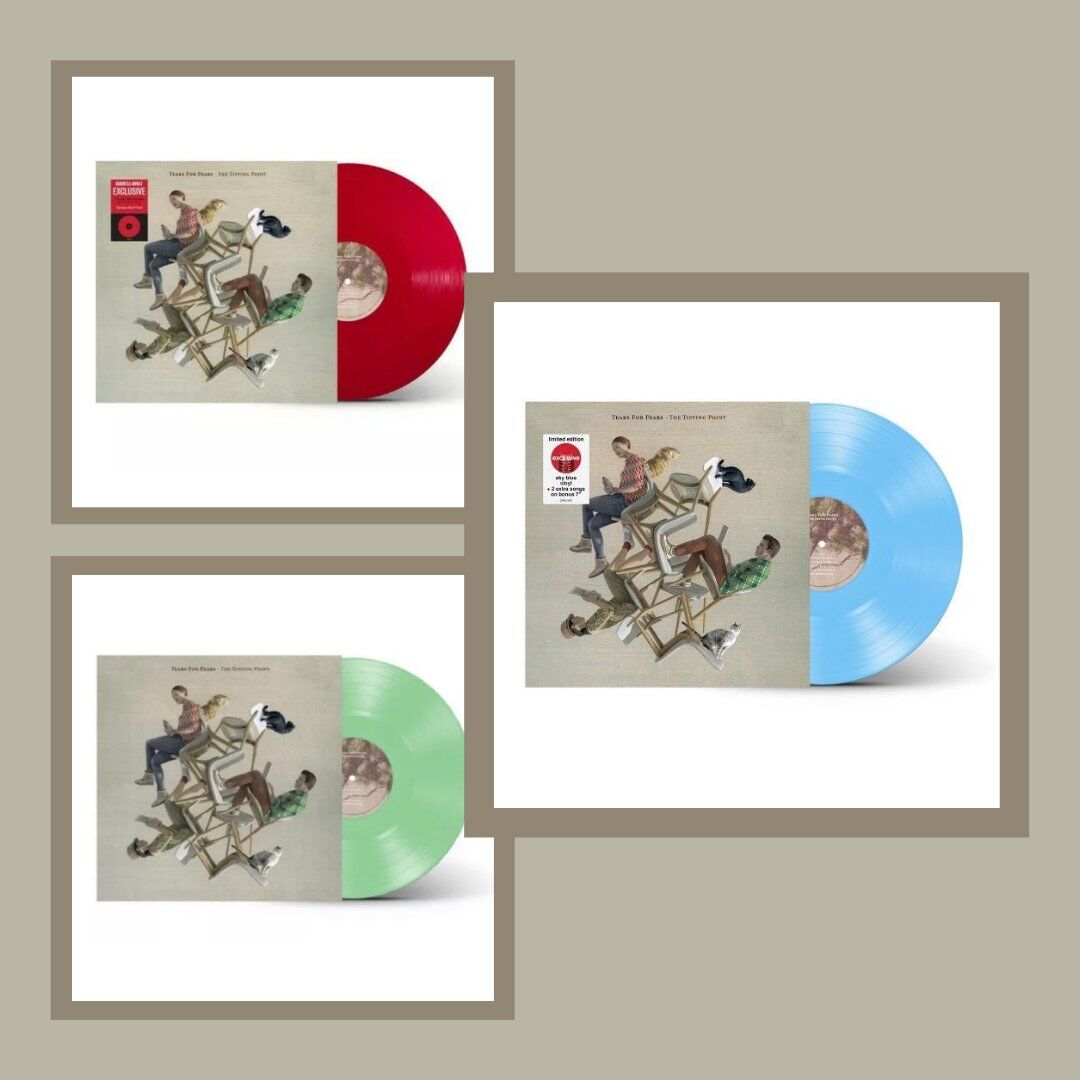 It was a much anticipated album after their last one being 18 years ago.

In its first week, the album has sold a total of 21,500 physical copies of the album. More than 44% of the sold copies were on vinyl which approximates to 9,500 copies. It is a huge achievement given the long wait for new music released by them.

The album has 4 exclusive and limited editions aside from the standard black vinyl. There’s the exclusive limited edition color vinyl in baby pink available on the band’s website and the hand-numbered green vinyl exclusively bought through Assai Records.

Aside from a different color, the Target-exclusive version of the album also has 2 extra tracks pressed on to standard black 7” vinyl disc. 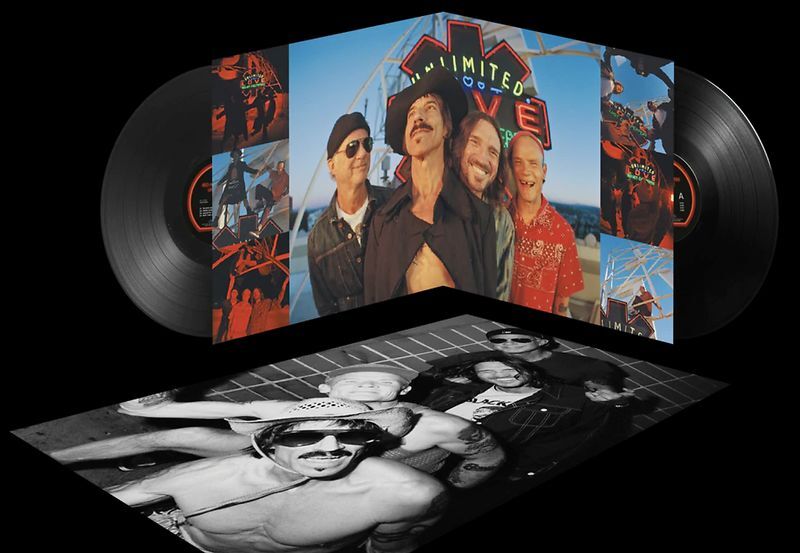 Red Hot Chili Peppers’ 12th studio album Unlimited Love may just have the most number of versions on this list with a total of 14 versions.

Yes, we’re not joking, there are 14 varieties of the album’s vinyl album.

It has three versions with black vinyl records: the standard edition, the deluxe edition with a gatefold jacket and poster, and the indie exclusive LA version with an alternative artwork.

The rest of the versions are all store exclusives with different colors. There’s yellow for Spotify, blue, blood red, and orange for indie stores, sky blue for Walmart, light blue for Urban Outfitters, apple red for Target, and white for HMV.

Given the extensive list of versions die hard fans need to buy, it is not a shock that it had the largest sales week for an album on vinyl for this year.

That was before Harry Styles and Taylor Swift released their own of course. It sold a total of 38,500 vinyl albums which makes it the second largest sales week for a rock album since 1981, so it still is something to be proud of.

#8. A LIGHT FOR ATTRACTING ATTENTION by THE SMILE 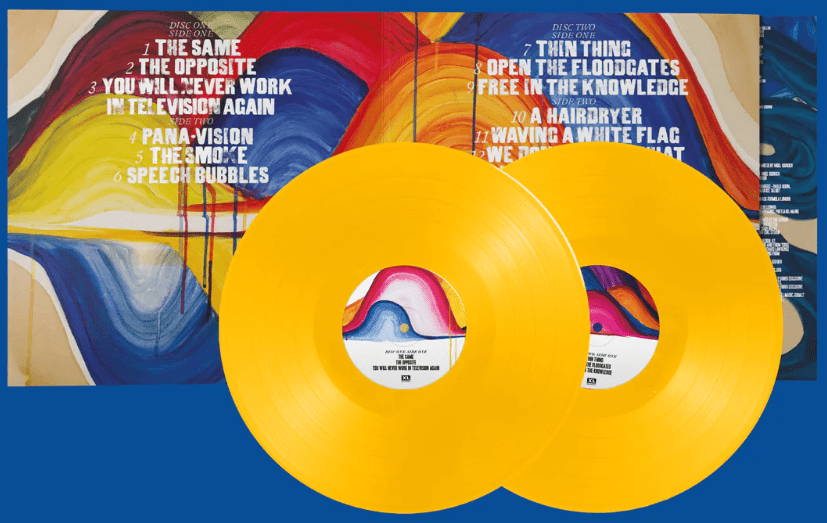 Last on the list is The Smile’s debut studio album A Light for Attracting Attention.

The total album sales may not have given the band its number 1 spot in the Top Album Sales Chart, but it did give the band its 3rd spot. It is a great achievement especially with the band only being 2-years into their career.

Approximately 19,000 out of the 20,000 sales were physical albums and an estimate of 15,000 copies of it were on vinyl. And in contrast to the numerous editions this album precedes on this list, The Smile’s debut album only has two vinyl editions.

The first is the album on two 12” black vinyl records and the other is on yellow vinyl records. Both of which are available at the band’s official merch store.

If you’ve read through the list I’m pretty sure you’ve picked up a technique or tip from all the albums listed.

If you’re worried that you didn’t find a tip behind the list then here it is:

“Have a vinyl release in different editions or versions.”

If you got it, congratulations. If you didn’t then here it is.

You’ve seen how 2 versions did it for The Smile so maybe you can do that first, then add another after testing the water.

Band Promotion: Put Some Thought Into Your Sticker Designs