There is no denying that the most popular physical album around the world for this year and the past two years have been vinyl records.

Vinyl sales in the US, according to the Recording Industry Association of America’s (RIAA) 2022 mid-year music revenue report, have risen by 22% in the first half of 2022. 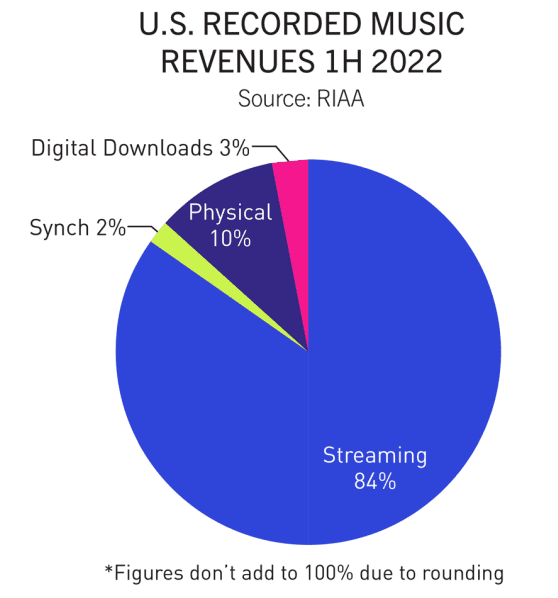 The overall music revenue in the US has seen a 9% increase from its 2021 counterpart of the same period.

From $6.5 billion in 2021 to $7.7 billion in 2022 and this has something to do with the additional 8 million people, more or less, paying for subscription to streaming services this year.

Though streaming accounts for 84% of the total music revenue and physical albums accounts for only 10%, the increase in vinyl sales cannot be outdone by any other formats’. 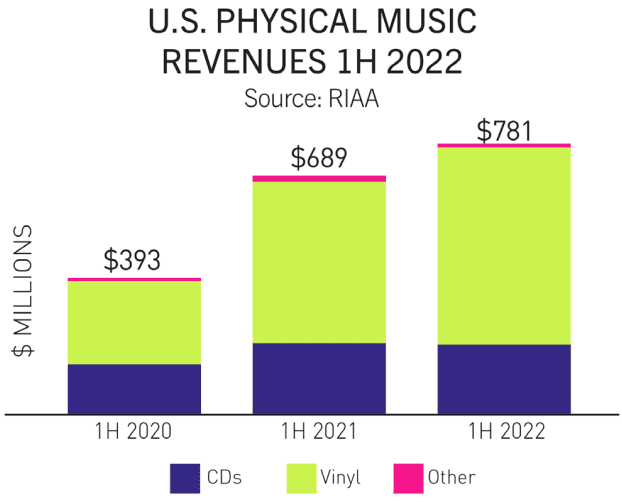 As seen in the figure above, vinyl record sales have increased the most from last year’s sales. There has also been a 15.7% increase in the shipment of vinyl records from 18.8 million units shipped in 2021 to 21.8 million copies this 2022.

RIAA Chairman and CEO, Mitch Glazier commented on how music lovers can’t seem to get enough of the “high-quality sound and tangible connection to artists” that vinyl delivers. He also pointed out how labels have met these demands by continuously releasing “exclusives, special reissues and beautifully crafted packages and discs.”

Though the Nintendo Switch games snatched the title of the best selling physical entertainment format this year, its sales have been declining year-on-year by 12.5%. Vinyl sales on the other hand have been steadily increasing by 12.2%.

However, if you group together the console games (Nintendo Switch and PlayStation 4 and 5), there is not much of an exciting game there. Still the growth of vinyl sales has been a fascinating phenomenon.

“Vinyl’s rise and rise seems unstoppable. For a 74 year old analogue format to eclipse the digital-age technology of games platforms is quite extraordinary.

Ten years into its long climb back to favor, the vinyl revival is most definitely here to stay,” says Kim Bayley, CEO of ERA.

It’s 2022…What Is This CD Revival That They’re Talking About?

Branding and Reputation Tips for Artists

You might think only companies need branding but branding simply means your image. It’s how you look, act, talk. It’s your aura, your smell, your opinions… your you-ness that sticks to people’s minds. Therefore, all of us have a brand. When you’re starting a career, any career, it is important to take care of your […]

How splatter vinyl records are made

Single-colored vinyl records sure are cool but they can be pretty boring for old collectors and fans who’ve already seen a lot of these custom-colored vinyl records. To add spice, why not have a custom vinyl pressing for splatter-designed ones? They additional cost won’t be a lot, yet they’ll make your fans thrilled. But first, […]