Are you a fan of 80s music?  Do you like collecting vinyl records?

Here are 20 great vinyl albums with the most iconic album covers.

We hope you find something to add to your collection! 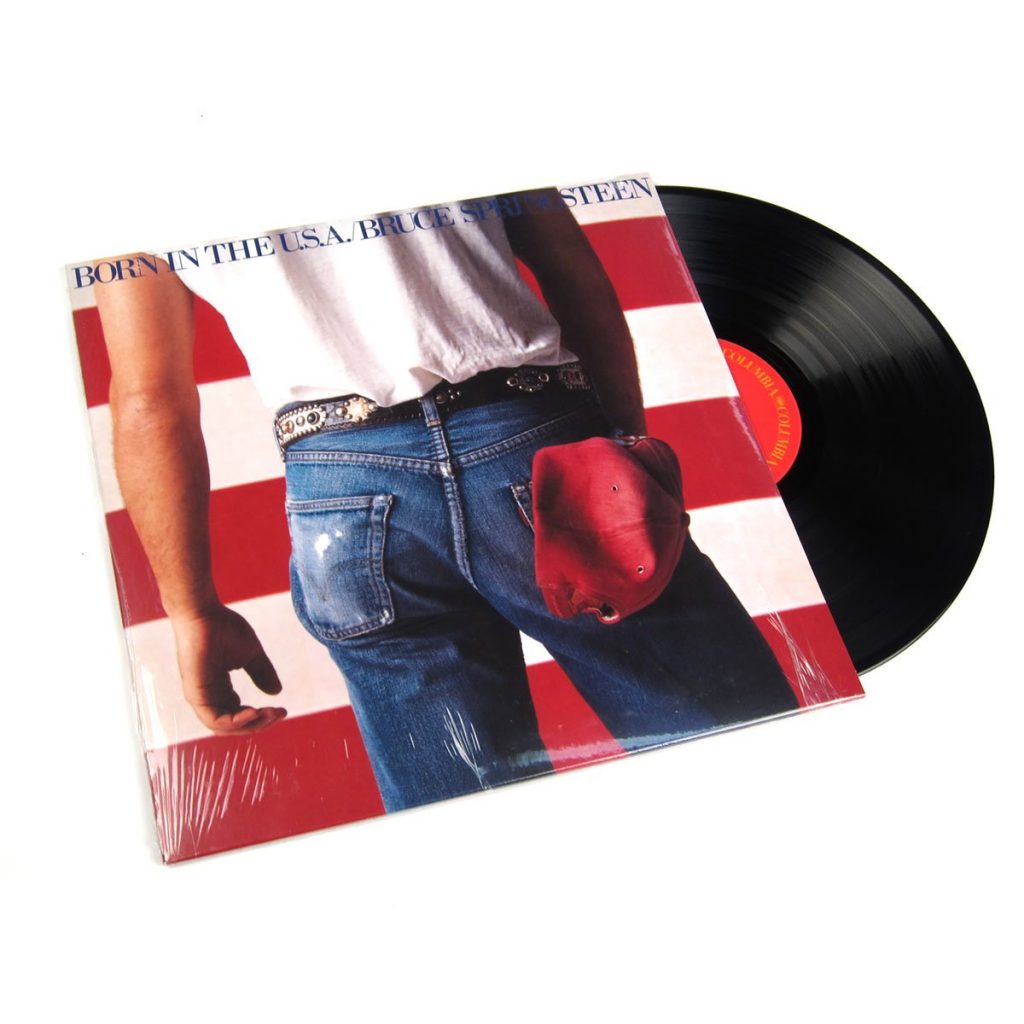 Bruce Springsteen’s Born in the USA is regarded as one of the defining albums of the era.

It has won a Grammy award and sold millions and millions of copies worldwide.

However, the album’s artwork has often been misunderstood for being disrespectful to the American flag since Springsteen looks like urinating on it.

To clear it up, he said that there were actually a lot of pictures taken but since his back view looked better than his face they chose it. 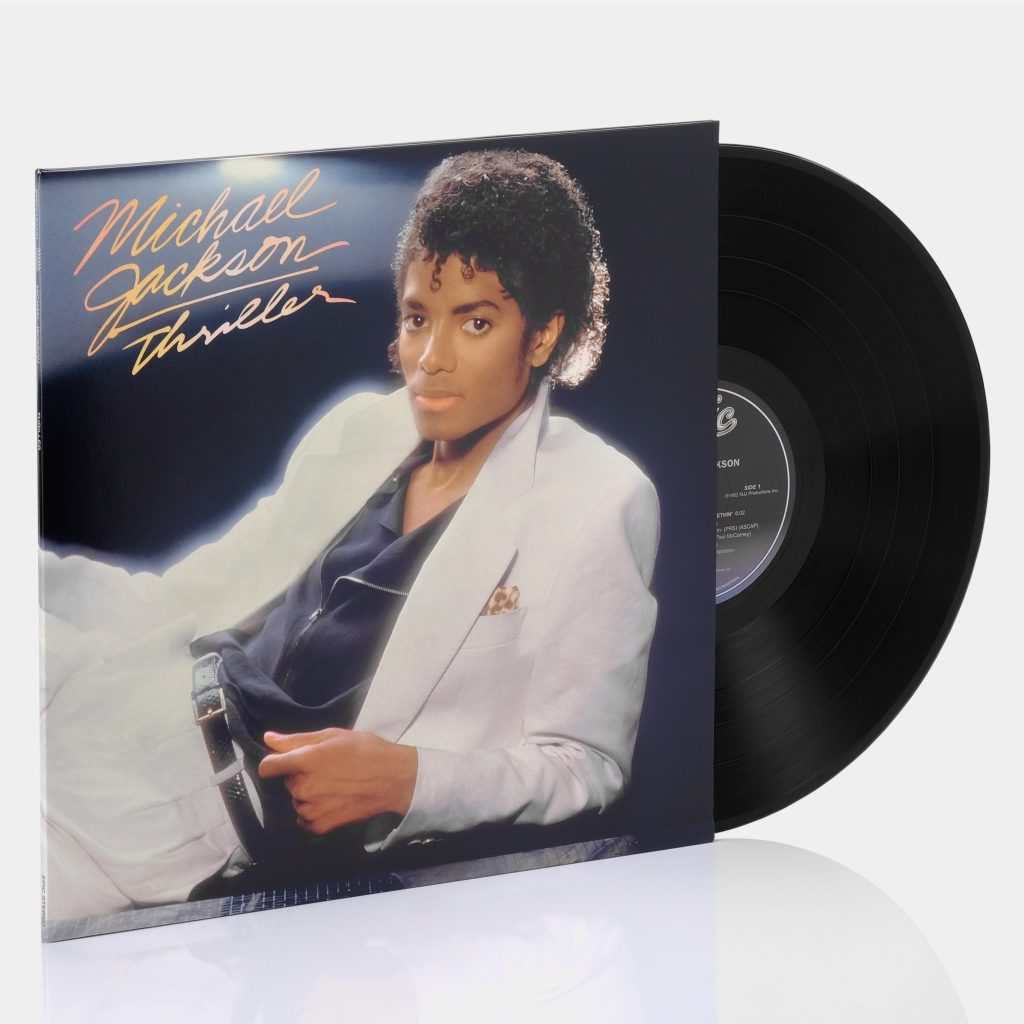 Thriller was the album that launched Michael Jackson’s music career to the roof.

Surely, everybody recognizes the cover of MJ on his trademark white suit.

An iconic person on an iconic artwork that covers for one of the most iconic albums of all time.

#3. ROGER WATERS – THE PROS AND CONS OF HITCH HIKING 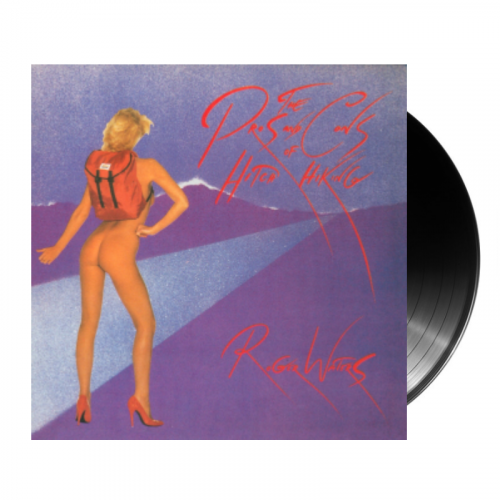 The Pros and Cons of Hitch Hiking is Roger Waters first ever solo album released in 1984, the year before his announcement of departure from the band, Pink Floyd.

The artwork was designed by Gearld Scarfe and featured the nude rear-view of Linzi Drew.

The controversy that the artwork has caused, pushed Columbia Records to censor the woman’s buttocks with a black box  for the succeeding releases.

25 Of The Most Controversial Album Artworks Of All Time 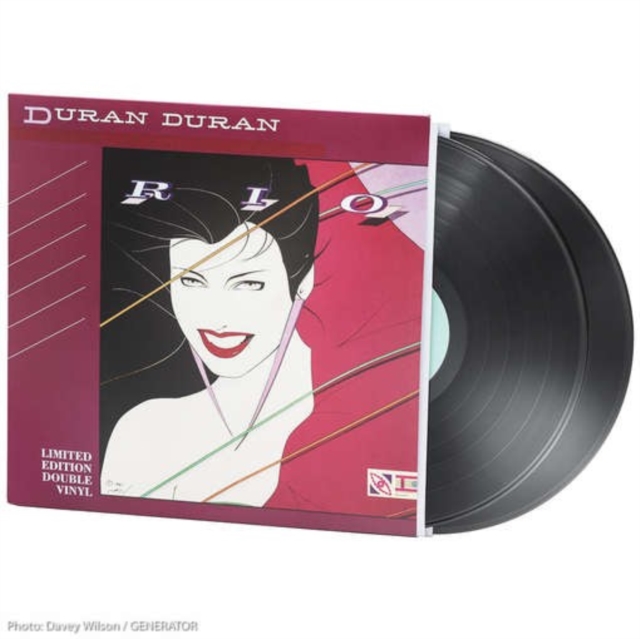 Duran Duran’s second studio album, Rio, has been widely acclaimed as one of the greatest album covers of all time.

The designer of this great album cover is Patrick Nagel who was known for his trademark style showcasing paintings of the quintessential 1980’s woman. 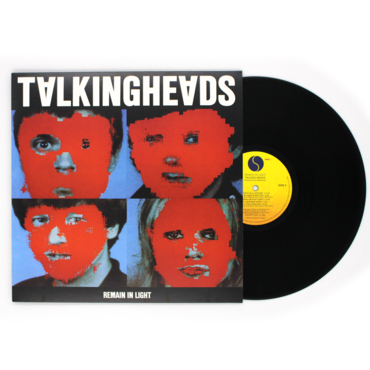 Talking Heads’ fourth album, Remain in Light, is the first ever album to be housed by one of the first computer generated artwork printed on its sleeve.

It really needed a lot of patience and effort to create this in the 1980’s since the computer power in those earlier times was limited. 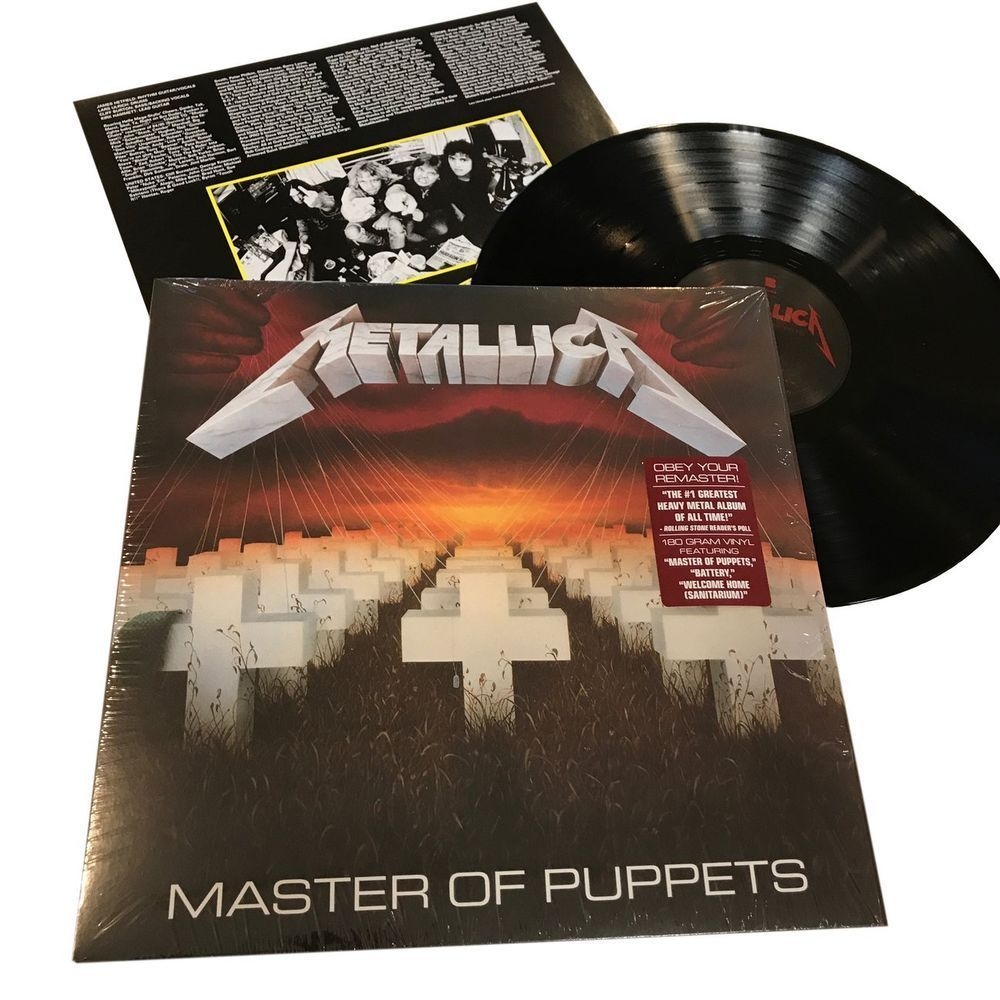 Master of Puppets is Metallica’s last album that features bassist, Cliff Burton, who died during the album’s promotional tour in a bus accident.

For the album’s cover, Metallica and Peter Mensch designed it to summarize the album’s message, of people being manipulated subconsciously.

It presents a cemetery filled with white crosses that are connected to strings. The strings are manipulated by a pair of hands in a blood-red sky.

The idea was eventually painted by Don Brautigam.

Nirvana’s Nevermind will always be a part of any list concerning iconic and great album covers of all time.

The cover of the album features Spencer Elden as a naked baby underwater with a U.S. dollar bill on a fishhook.

Cobain said he got the idea while watching a television show on water births with Grohl. 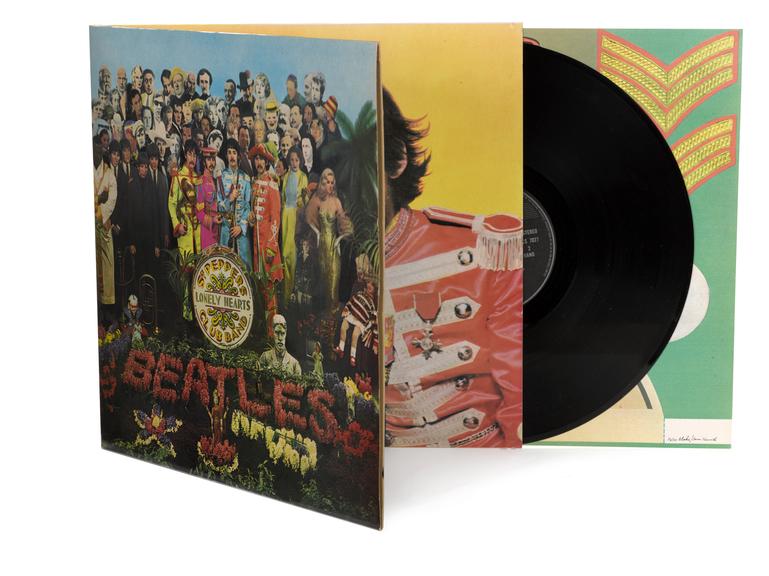 Another cover that won’t leave any of the lists mentioning iconic album covers is the Beatles’ Sgt. Pepper’s Lonely Hearts Club Band.

The cover is one that features a lot of celebrities and historical figures while the members pose in front.

The artwork was designed by Peter Blake and Jann Haworth. Velvet Underground and Nico’s debut collaboration album is named after them and its cover is one of those again.

It’s a very simple album cover, but what makes it iconic and very unforgettable is the fact that the banana skin can actually be peeled off.

It’s a very clever and entertaining one. When the skin is peeled off, it shows a pink colored banana. 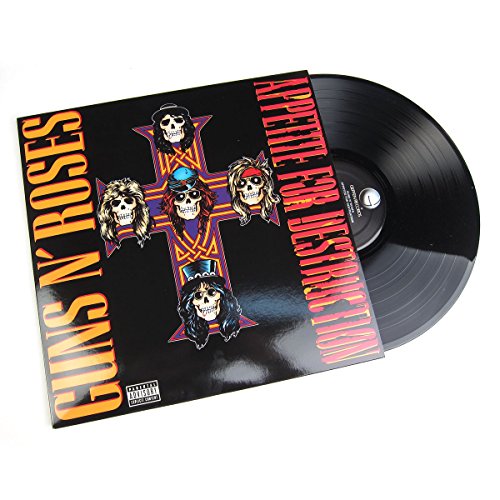 Guns N’ Roses’ more well-known cover art was actually not the original face of the album during its release.

Due to how the piece of art showed graphic sexual assault by a robot, it was met with shock and uproar.

Though there was a whole 360 change for the album, Appetite for Destruction’s official cover art does not disappoint. It features a cross with 5 skulls positioned on all its points, representing the five members of the band. 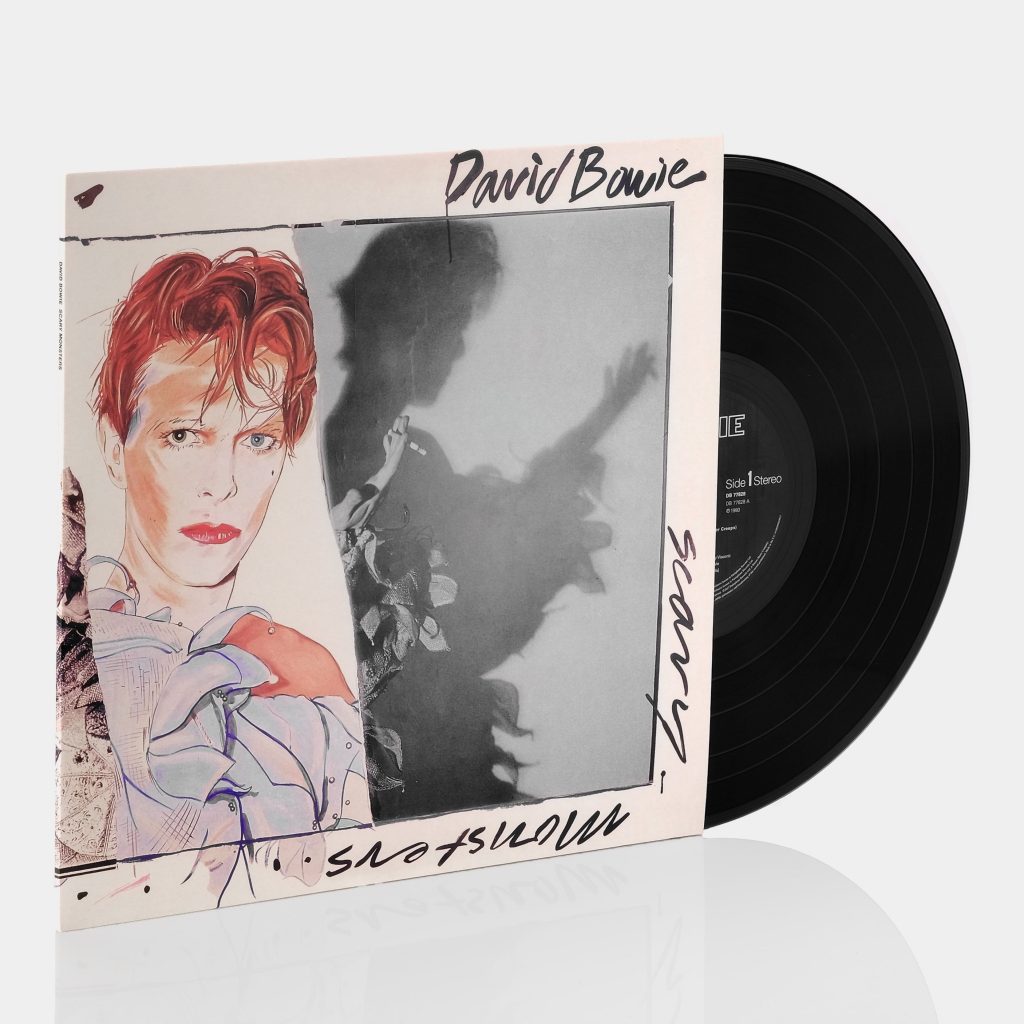 David Bowie has been known for creating the best album cover of the 70s so there really is no surprise that he also has one from the 80s.

His fourteenth studio album also called just Scary Monsters is that album and it was released in September 1980.

The album features Bowie in the Pierrot costume he worn in his Ashes to Ashes music video along with a photo taken by photographer Brian Duffy. 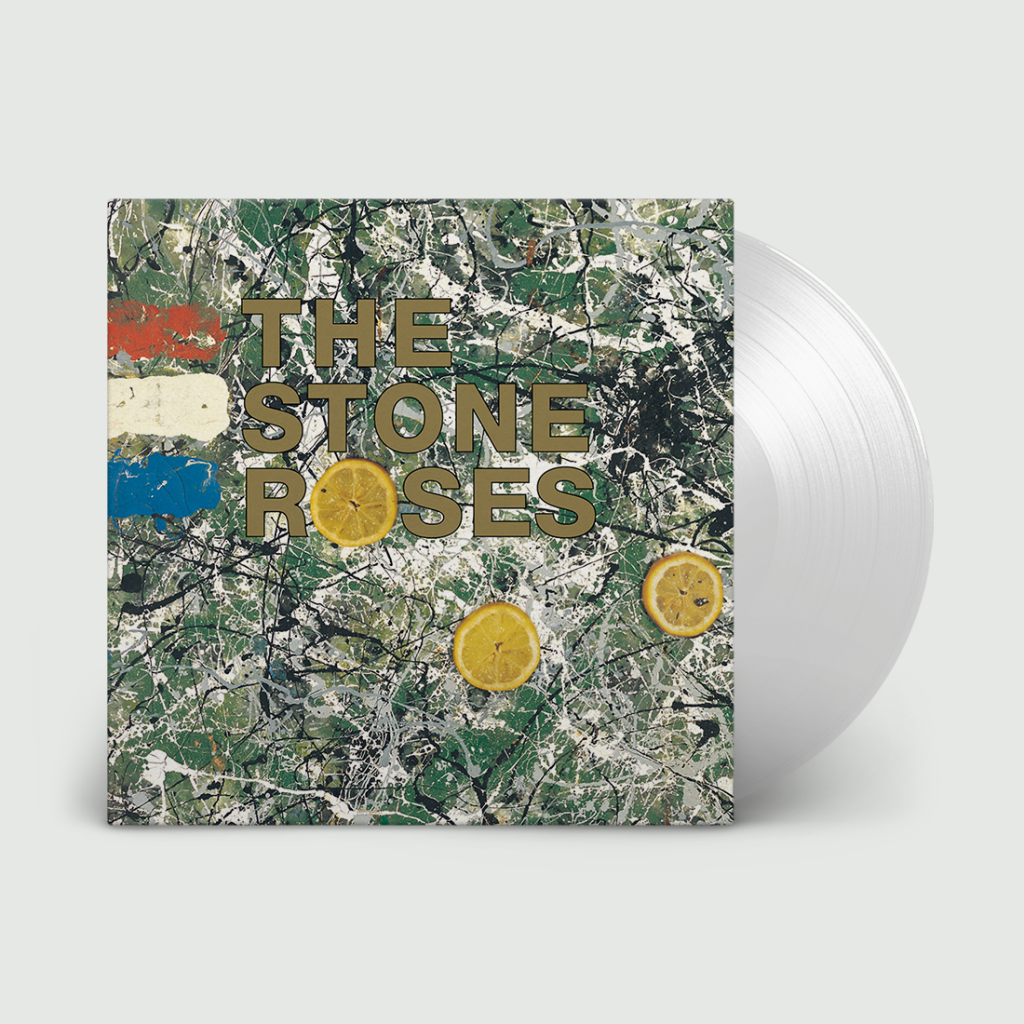 The Stone Roses’ eponymous debut album features the Jackson Pollock inspired paint splatters that serves as the background for the album’s title.

The artwork was actually  a piece of art created by John Squire, the band’s guitarist, with the title “Bye Bye Badman”.

After this, almost all of his paintings have decorated the band’s singles. 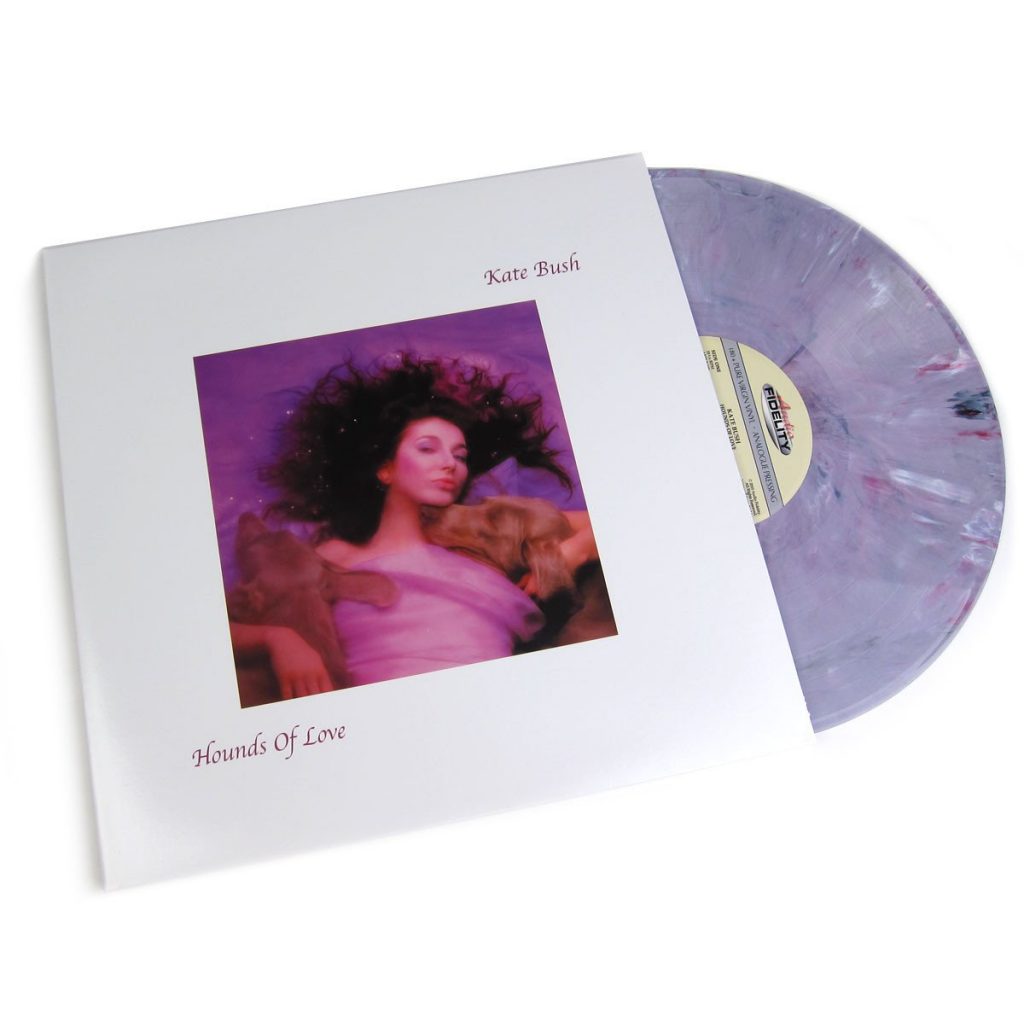 Thanks to John Carder Bush, Kate Bush’s brother, and his skills and patience one of the most iconic album covers of the 80’s was created.

John actually had only minutes to capture as much as he could after an hour of persuading the dogs to lie down next to Kate. 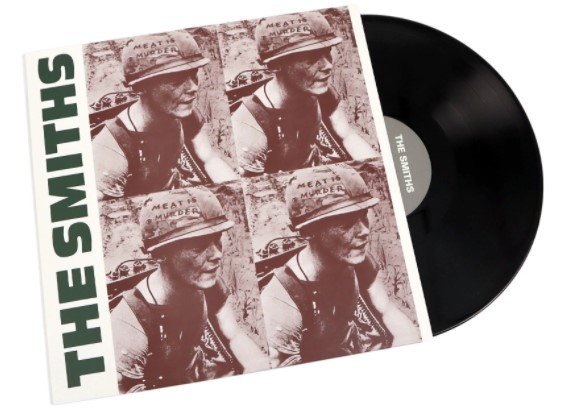 Released in 1985, Meat is Murder is the second studio album by the English rock band, The Smiths.

Among all the albums released by the quartet, this album takes the whole cake without even leaving any crumbs when we talk about album covers.

It is one of the most iconic as it slammed Morrissey’s, the frontman of the band, anti-war messages home.

The cover’s a four-part collage with the same image of US Marine Corporal Michael Wynn from Emile De Antonio’s controversial Vietnam War documentary entitled “In the Year of the Pig”.

And to make it more impactful, Morrissey replaced the scrawled message “Make Love Not War” with the band’s album title. 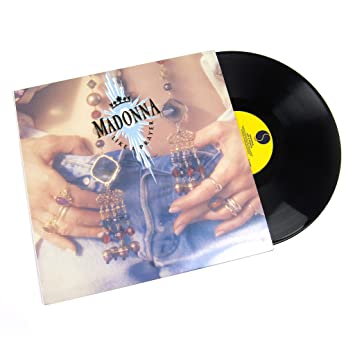 Madonna’s Like A Prayer album is not just known for the tracks within it, but also for the artwork printed across the single vinyl jacket.

The Queen of Pop’s Like A Prayer album cover that suggested a feminist spin to it.

The Guardian in later years commented on the artwork saying “It’s hard to think of an album more evocative of women in the 80s than Like A Prayer, with its juxtaposition of jewels, religious iconography and high-waisted pale denim jeans.” 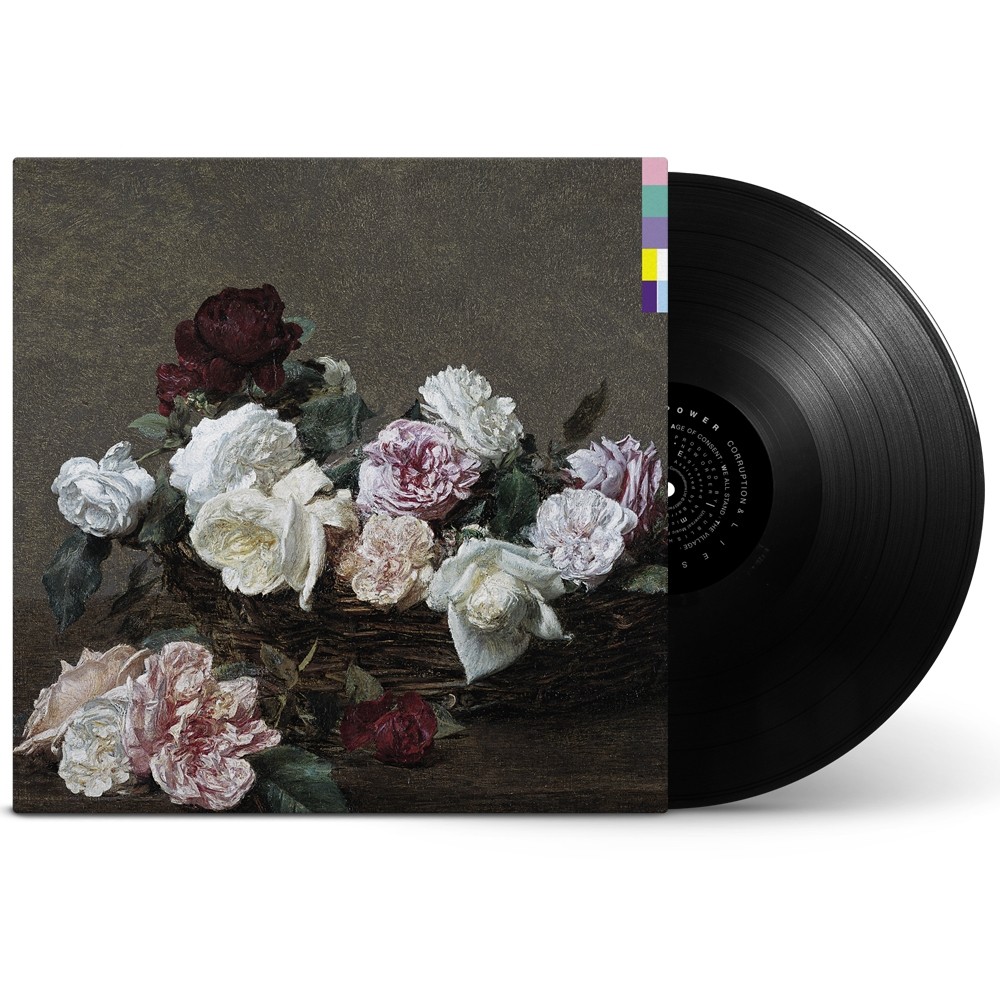 The album has impressive and engaging artwork.

It features a reproduction of Henri Fantin-Latour’s painting “A Basket of Roses” showing how “power, corruption and lies infiltrate our lives.” “They’re seductive,” just like flowers.

It is also very noticeable that there are no texts on the cover to indicate the title of the album and the band’s name.

That’s because it has to be deciphered by the buyer using the color-coded alphabet. 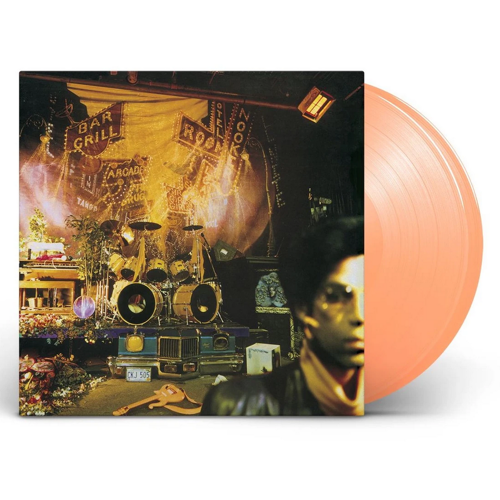 Prince has been widely regarded as one of the greatest musicians of his generation and this album, Sign O’ the Times, is considered by many as his magnum opus.

But aside from the great music it holds, the artwork on its jacket is another thing to be marveled about.

The artwork features a backdrop of a Minneapolis stage of a musical band that Prince successfully borrowed.

He then had his team add props from his studio and home and have Jeff Katz photograph half of his face with his creation as the background. 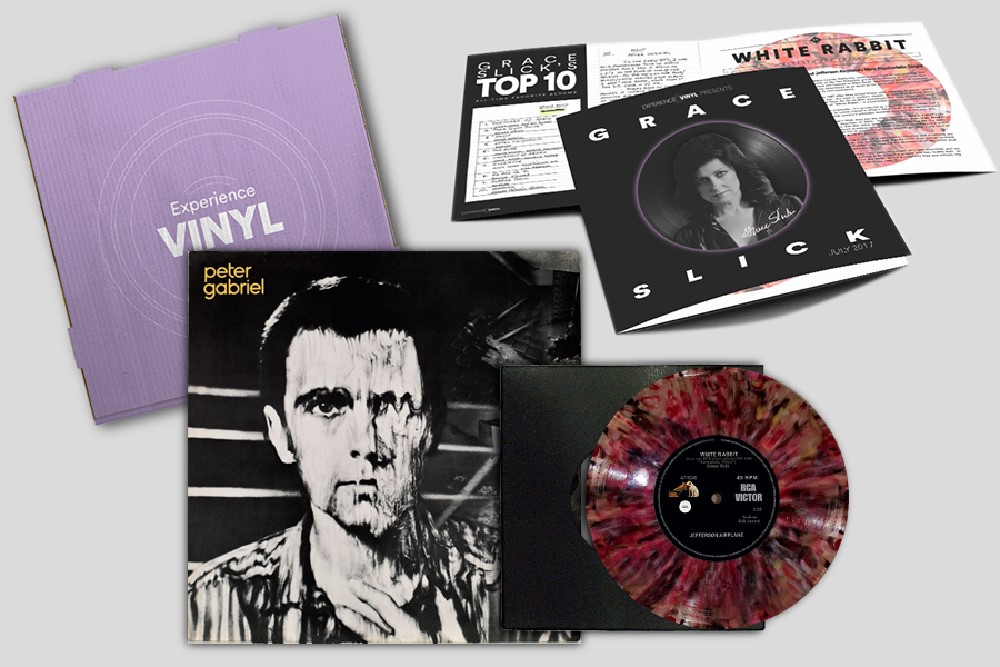 The 1980 album by Peter Gabriel is his third eponymous studio album including the singles “Games Without Frontiers” and “No Self Control”.

The tracks are pressed onto red-dominant splatter 12-inch vinyl records that are housed inside vinyl jackets printed with a disfigured image of Peter.

The cover was taken using a polaroid camera and he apparently helped in the disfiguring of his face by manipulating the polaroids as they were developing. 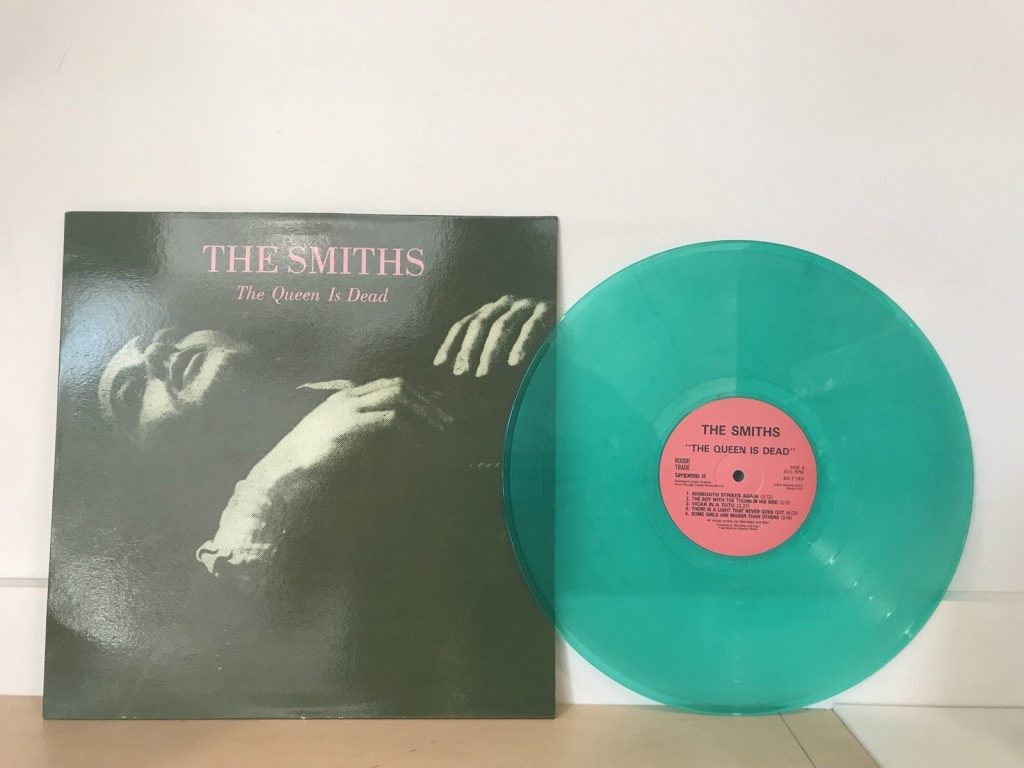 Another The Smiths album is The Queen is Dead, released a year after Meat is Murder.

The single jacket features a scene from the 1964 film L’Insoumis, with the English name The Unvanquished.

The actor apparently approved the use of his image with a favor of changing the title of the album, however the band obviously didn’t fulfill it.

#20. DEPECHE MODE – MUSIC FOR THE MASSES 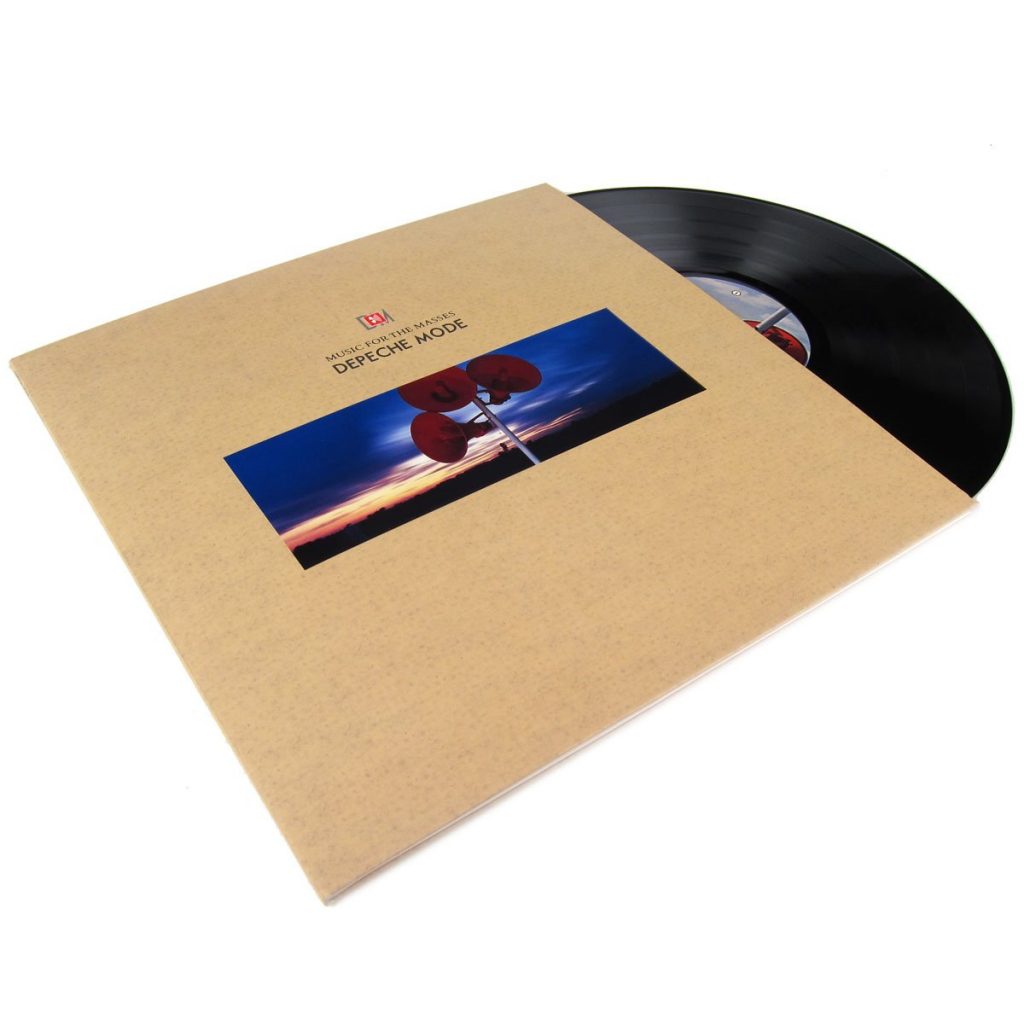 Music for the Masses is the English electronic music band’s sixth studio album released in 1987.

The cover of this album was designed by the longtime Depeche Mode collaborator, designer Martyn Atkins.

He used the megaphone which symbolizes music and then situated it in a place that opposes the “masses” in the album’s title.

It created an eerie feeling knowing that the music from these megaphones won’t be heard by anyone.

This Katy Perry CD packaging can actually be good for the environment. The idea was to plant flower seeds in your garden while listening to Katy’s Prism album. For deluxe editions of her 2013 album, Prism, Katy Perry included packets of flower seeds in A prism seed paper. How cool is this idea? It’s as […]