We here at Unified love two things indie movies and awesome vinyl…so we decided to come up with this list!

Most of the popular movies are from movies from major movie studios, with famous casts and big budgets.

However, being a great movie doesn’t always have to be high budget, and that’s what independent movies have proved for so long.

Here are some of those indie movies with their awesome soundtrack vinyl album. 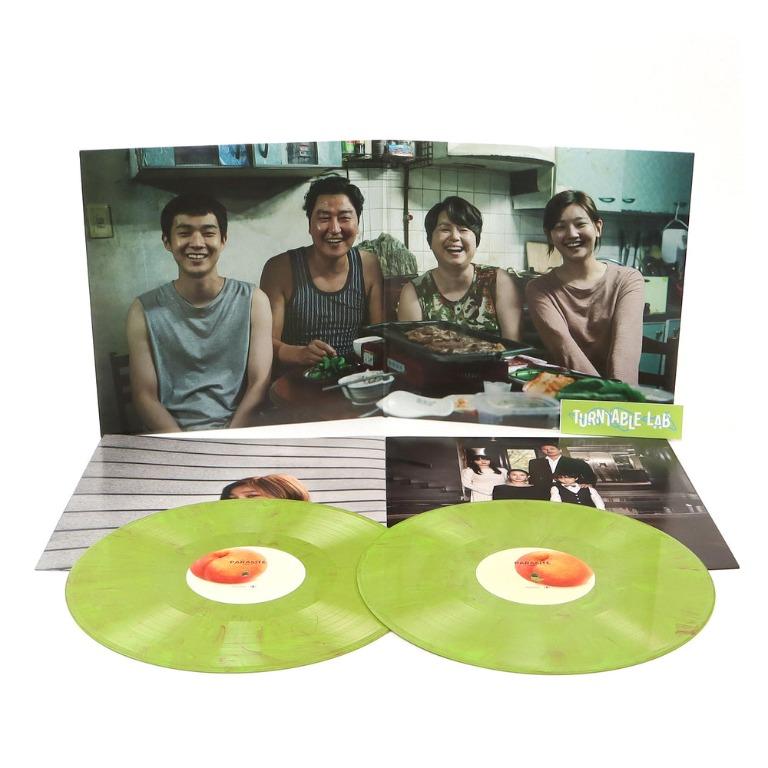 This might be the only asian film in this list and it rightfully gained its spot here because it is such a great film portraying how economic classes and greed affect people and in turn the society.

The critically acclaimed film of the year was directed by Korean director Bong Joon Ho which premiered in 2019 at Cannes Film Festival.

He took home the Palme d’Or for best film, being the first Korean to do so in the competition.

The 25 tracks are pressed onto two 12-inch vinyl records in lime green designed with red wisps.

The records are inside a printed gatefold jacket that features the poor Kim family inside their house. 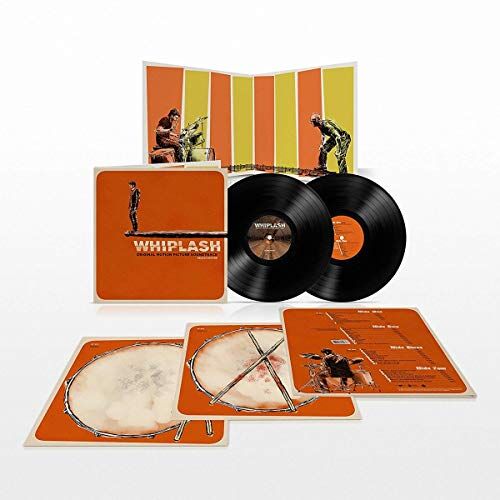 Whiplash is a psychological drama by Damien Chazelle that follows the story of an ambitious drummer that is driven into obsessive perfection by his abusive and ruthless bandleader.

The film was a big success, earning an Oscar nomination for Best Picture and Best Screenplay and winning Best Supporting Actor.

In 2014 and 2015, Whiplash’s soundtrack was one of the best-selling new soundtracks and it came back in 2020 as a deluxe edition with two standard black 12-inch vinyl records.

There are a total of 36 tracks pressed on them, including unreleased cues, outtakes, remixes and 6 songs removed from the original vinyl version. 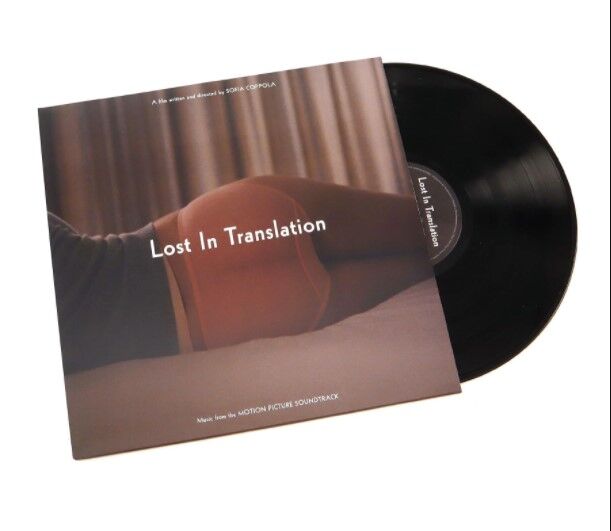 It is a film set in Tokyo’s Park Hyatt where two people, a conflicted newlywed (Johansson) and an aging movie star (Murray) meet and experience romance.

The film’s soundtrack is a mix of both popular music and original scores composed by Kevin Shields of My Bloody Valentine.

Some of these popular music are Sebastian Tellier’s Fantino, My Bloody Valentine’s Sometimes, and Happy End’s Kaze Wo Atsumete. 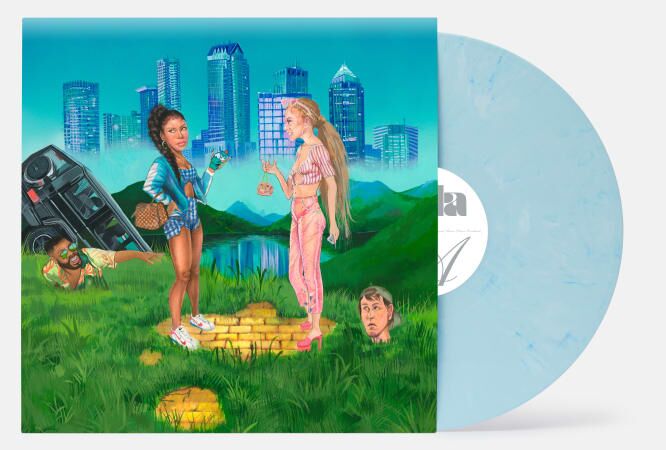 Zola is a black comedy crime film that was inspired from a 2015 viral Twitter thread posted by Aziah “Zola” King.

It revolves around four people that travel to Tampa Florida for a strip gig which turned into a 48-hour sleepless weekend.

A good film can never not be accompanied with a good soundtrack and we have Mica Levi to thank for Zola’s.

There was a marbled sky blue vinyl pressing of the original soundtrack which was accompanied with a single jacket that features an artwork by Kezia Harrell. 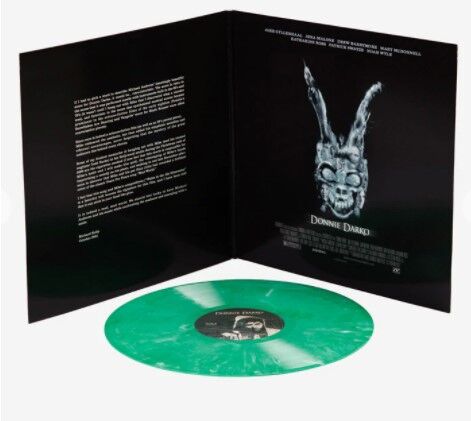 Donnie Darko premiered in early 2001 and was released in the United States in October of the same year, after the 9/11 attack.

Because of the situation the film has become not just another great film, but also gained a cult following.

The film was set in October 1988 during the US presidential elections, where Donnie sleepwalks and meets Frank, a demonic-looking rabbit that tells him the world is coming to an end in 28 days.

After that Frank manipulates Donnie into committing different kinds of crimes. Since the film’s budget was capped, he couldn’t hire more experienced ones like Thomas Newman and Danny Elfman.

However, it may have been a blessing in disguise because he get to let Michael Andrews do the scoring for tracks.

The gatefold jacket of the soundtrack’s vinyl album houses a green and white 12-inch vinyl record. 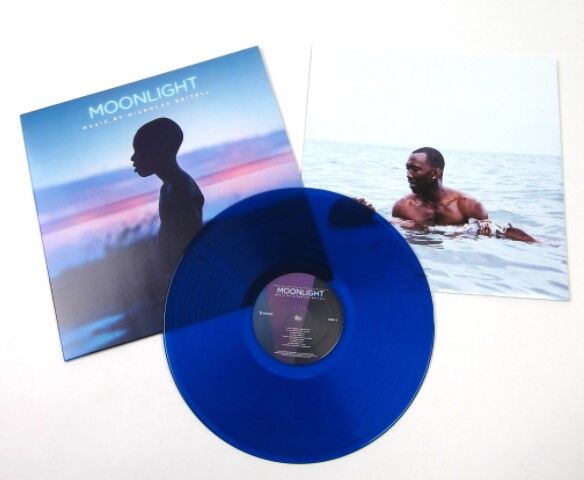 It is the main character’s journey to manhood, highlighting the difficulties he faces with his sexuality and identity.

For this film, the soundtrack is a mixture of originals scored by Nicholas Britell and soundtrack pieces chosen by Jenkins.

The tracks are listed in the order they play in the film and were pressed onto dark blue see-through vinyl records. 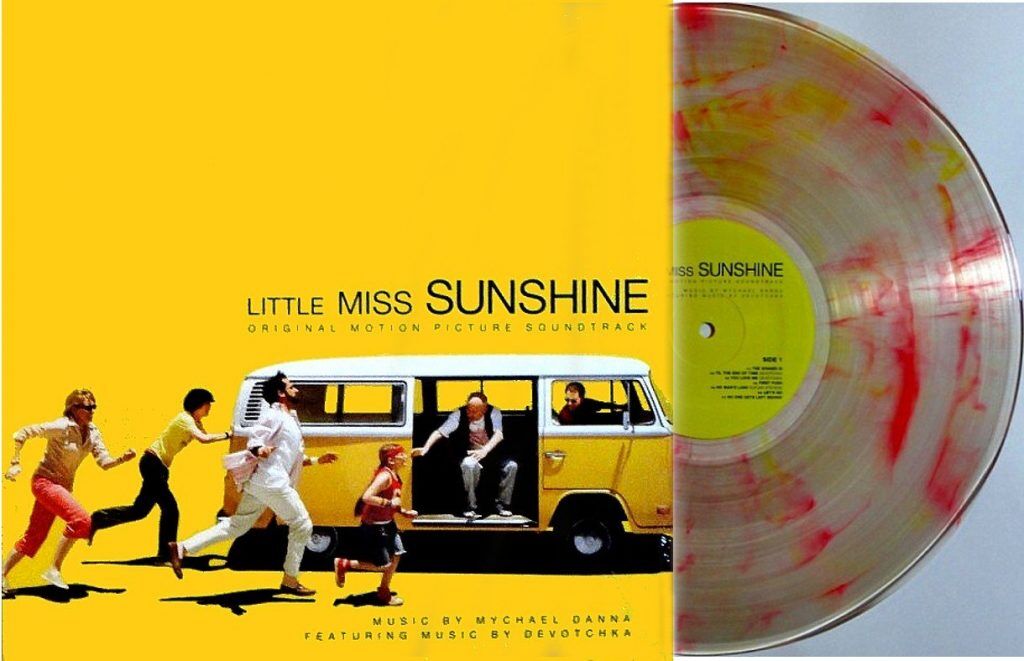 The film’s soundtrack album was filled mostly with works by DeVotchKa while there were selections from Sufjan Stevens, Tony Tisdale, and Rick James.

All 14 tracks were pressed onto 12-inch custom colored vinyl records. 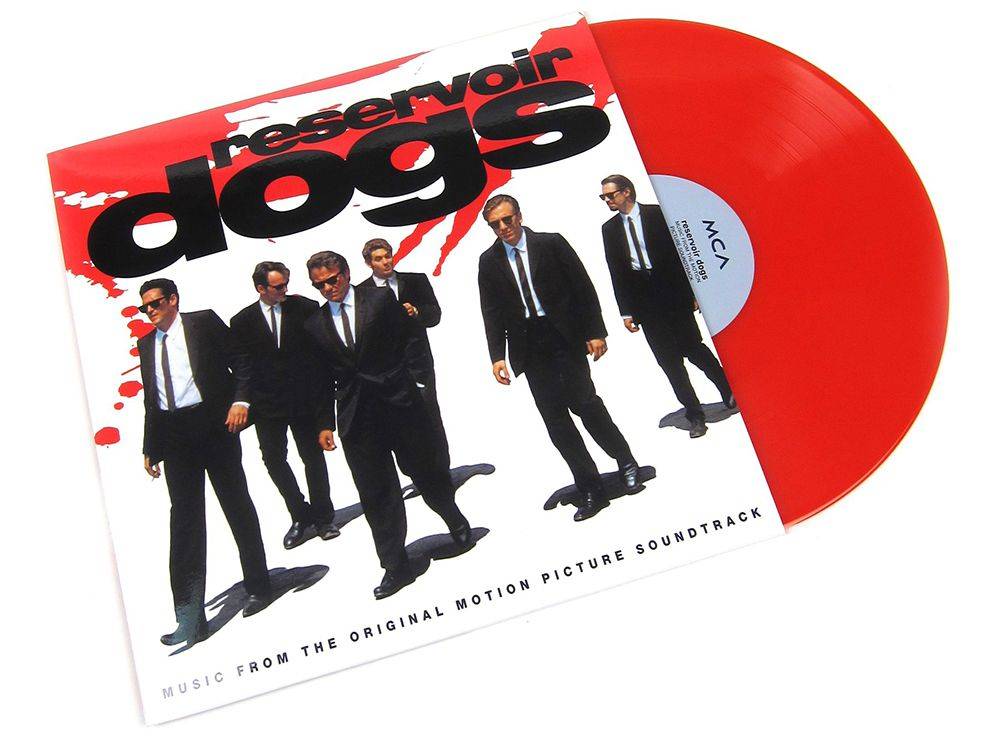 Quentin Tarantino’s masterpiece Reservoir Dogs revolves around 6 criminals who are strangers to each other as they plan a heist that goes wrong.

It has gained a cult following and was named as the “Greatest Independent Film of all Time” by Empire.

The Original Motion Picture Soundtrack of the film was released again as a special limited edition.

A vinyl pressing was done for the limited 3000 copies of the blood red vinyl records on their respective single jackets. 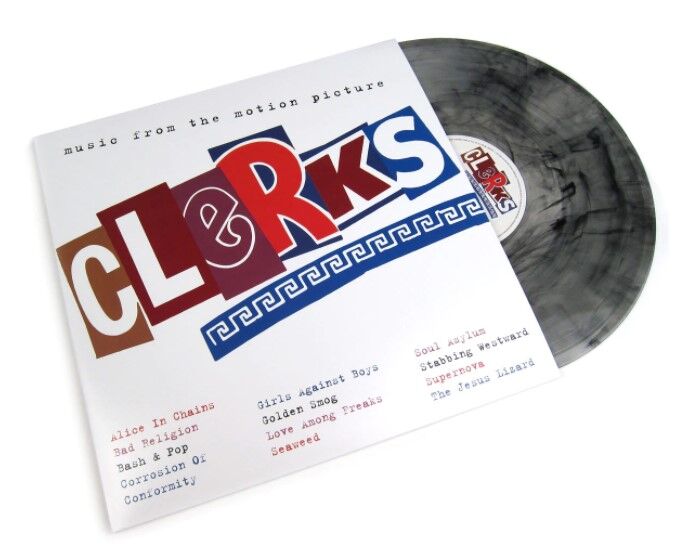 Kevin Smith’s debut in filmmaking Clerks, with a budget of around $230,000 has greatly influenced and has been considered as a landmark in independent filmmaking.

The film was shot in the convenience and video stores, where Smith also works in real life, for $27,575.

It presents a day in the life of store clerks Dante Hicks and Randal Graves, portrayed by Brian O’Halloran and Jeff Anderson, respectively.

The soundtrack is composed of new and previously released songs from artists like Bad Religion and Alice in Chains.

For the film’s 20th Anniversary, the soundtrack had its very first vinyl pressing.

It has two heavyweight 12-inch vinyl records that have a clear black smoke custom design. Additionally, there is a side of the record that has an etching. 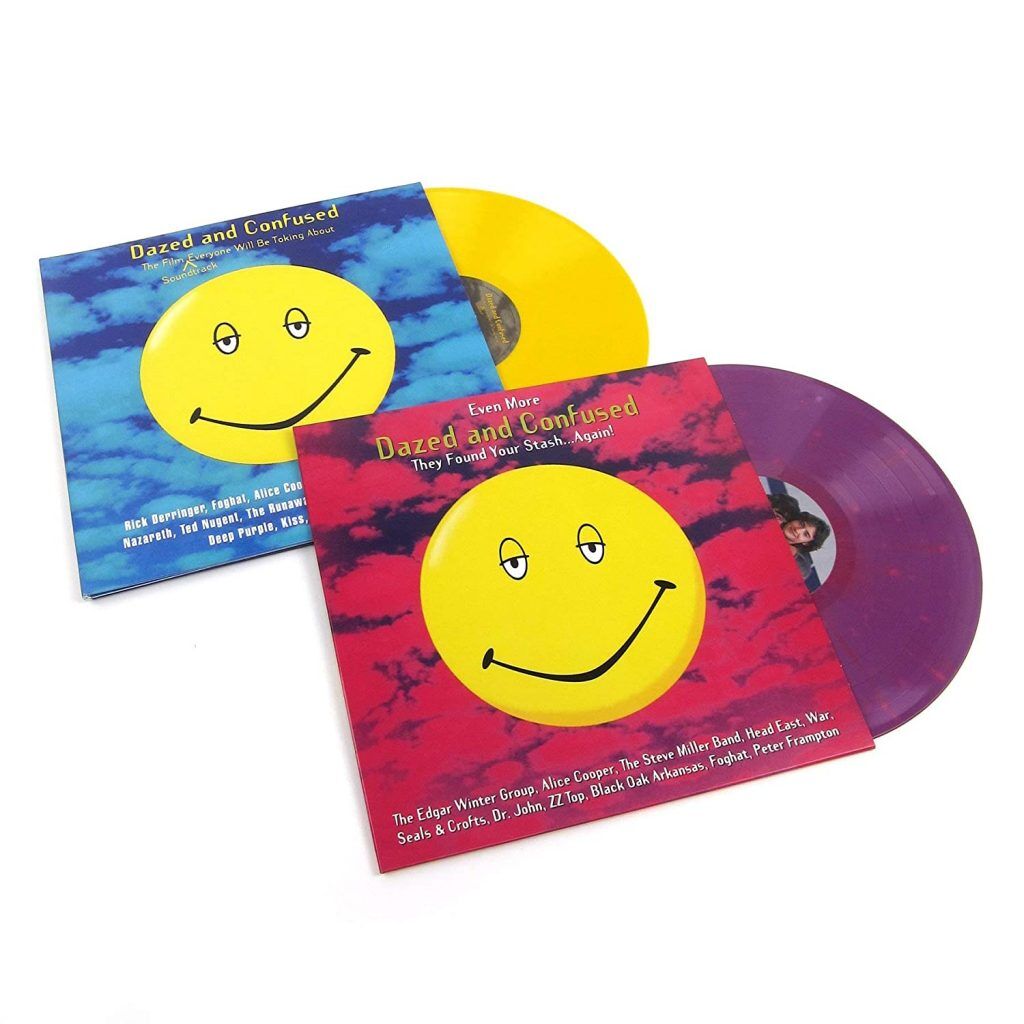 Richard Linklater includes a huge cast and follows different groups of Texas teenagers during the last day of school in 1976.

Though the film was a commercial disappointment at the box office, it has gained critical and commercial success over the years. It has even gained a cult following.

The soundtrack album of the film consisted of hit songs, mostly from the rock genre, in the 1970’s. It included songs Hurricane by Bob Dylan and Sweet Emotion by Aerosmith.

The limited custom colored vinyl record album of the soundtrack was released by Real Gone Music and housed in single jackets featuring a “dazed” emoji. 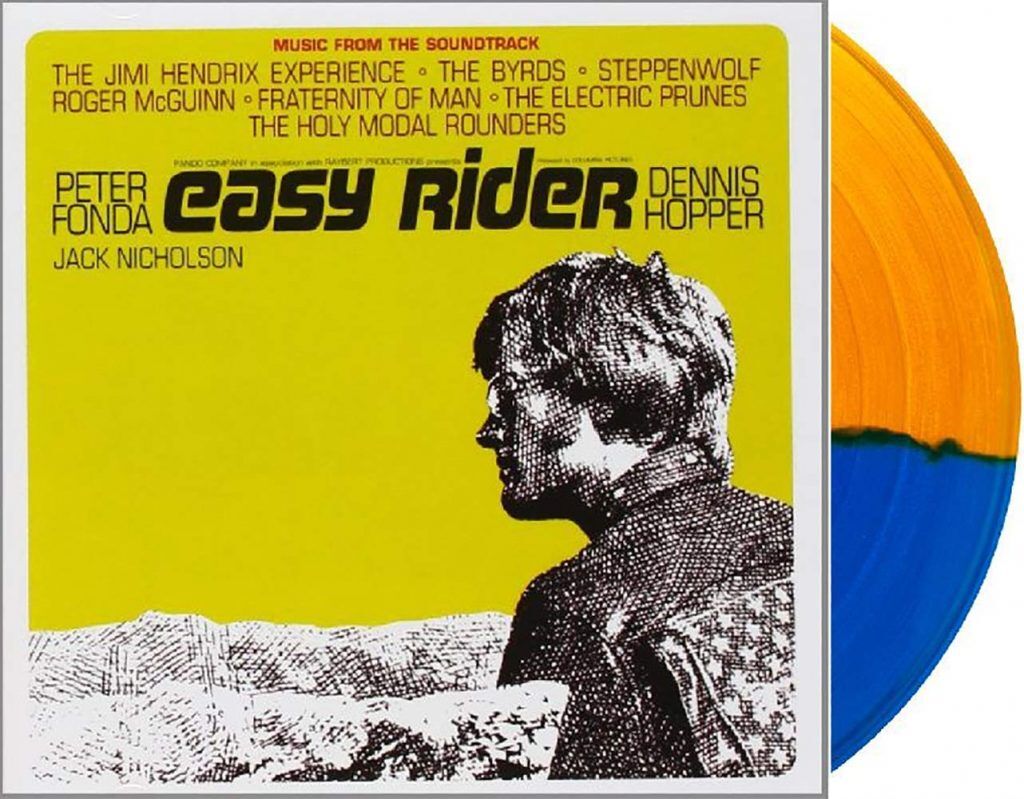 Easy Rider is a film that was deemed to be culturally, historically, and aesthetically significant by the Library of Congress because of what the film presents.

In the film written by Peter Fonda, Dennis Hopper, and Terry Southern, produced by Fonda, and directed by Hopper, the young adults’ experiences in the 1960’s were highlighted.

Aside from the cinematography, plot, and many other elements of the film, the soundtrack also played a big role in its greatness.

The soundtrack featured a lot of popular rock artists including The Band and Steppenwolf. 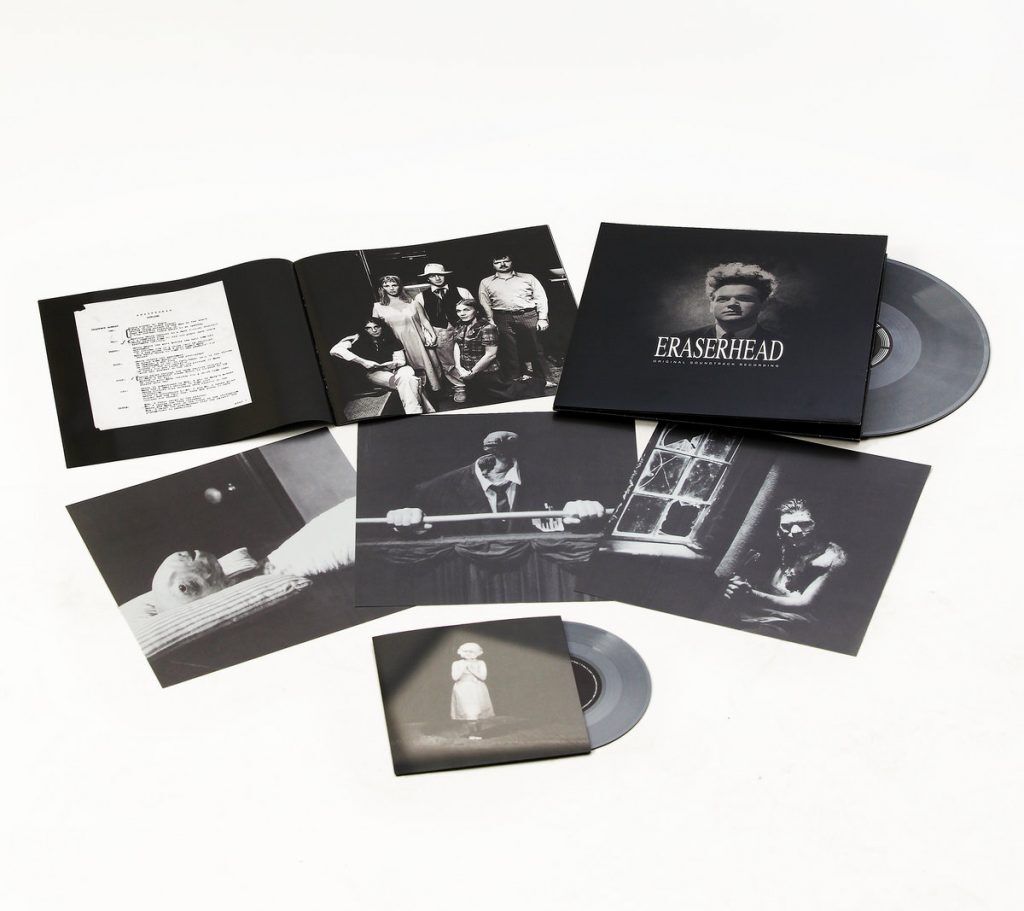 David Lynch’s Eraserhead is a surrealist and experimental film.

You better brace yourself first before you press play. It’s a film starring Jack Nance who portrays Henry Spencer, a man with a girlfriend pregnant to a bizarre lizard-like creature.

The soundtrack album of the film only contains two tracks, one is a compilation of excerpts of Fats Waller’s organ music and the other is Peter Ivers’ original score, In Heaven, for the film.

For Sacred Bones Records 10th Anniversary, the company released only 1000 copies of the silver vinyl record.

The album includes a 7-inch vinyl record that features Ivers’ In Heaven, a deluxe 16-page book, and three 11×11 prints. 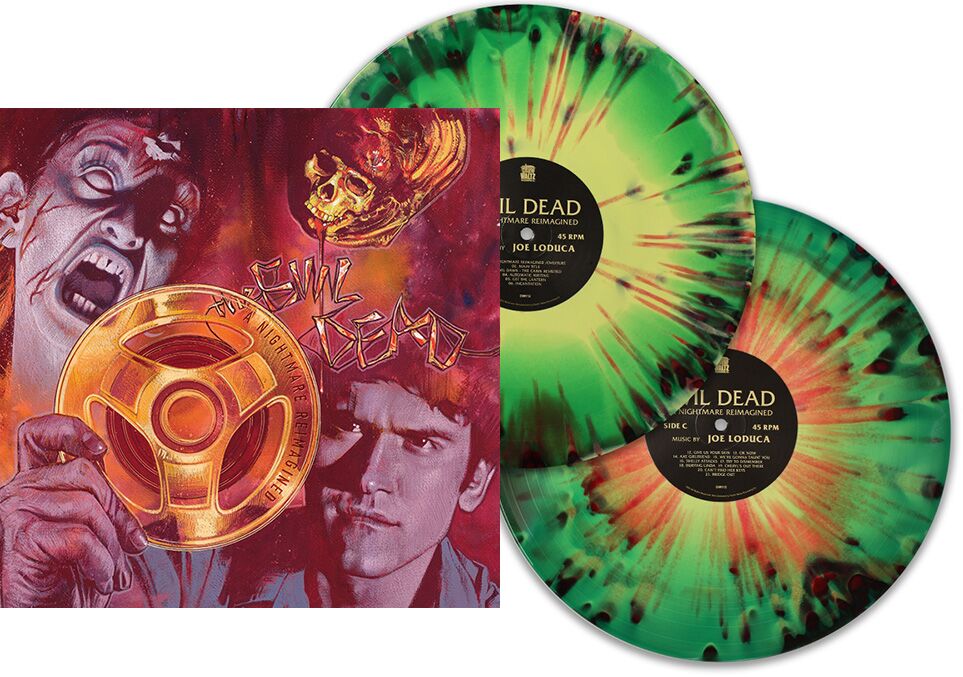 The Evil Dead is Sam Raimi’s first installation for his trilogy of comedic horror films.

The film follows a group of people who found an old book that could awaken the dead when the text is read out loud.

The legendary horror scores for this film by Joe LoDuca were rerecorded and reinvented by LoDuca while going through the drawing board again. 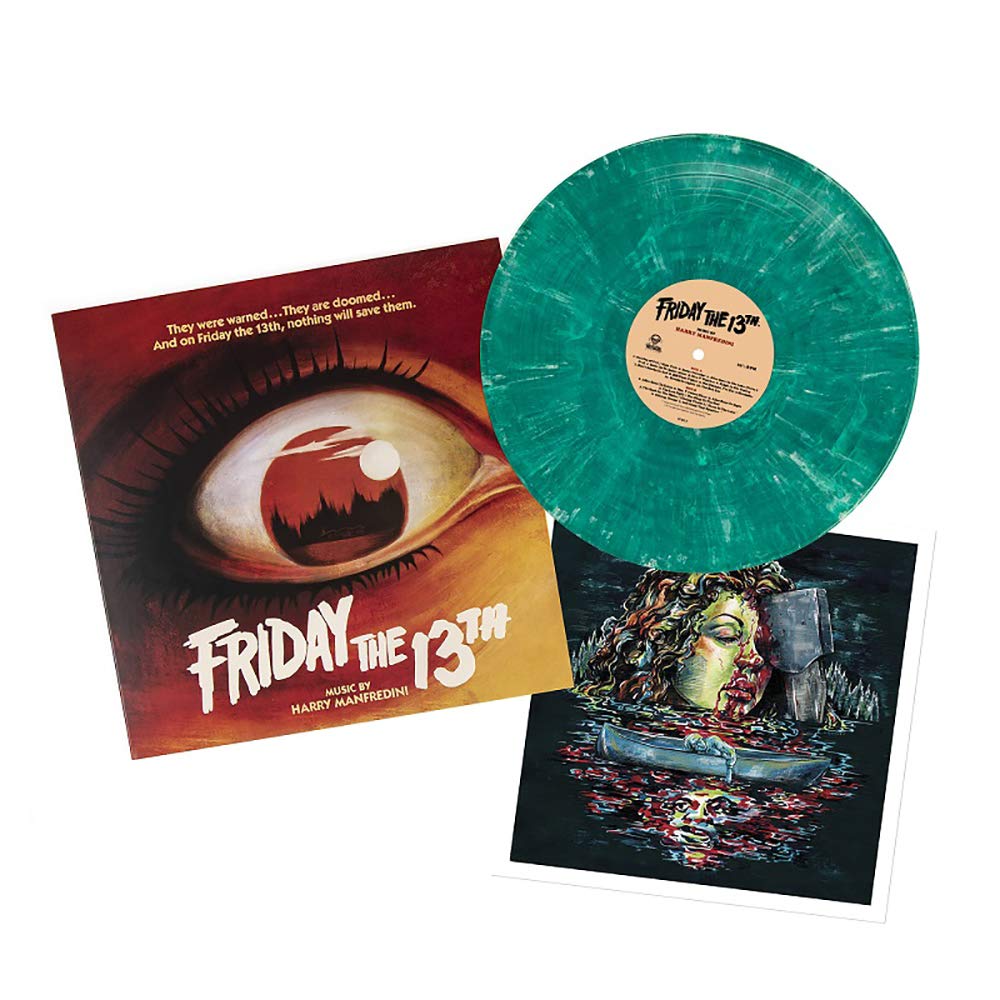 We all know how Friday the 13th has always been associated with misfortunes, and to some extent, death.

In this film named after the superstitious date, the film is, you guessed it right, a slasher film.

The film follows a group of camp counselors who are murdered one by one by an unknown killer. With the anonymity of the killer along with Harry Manfredini’s amazing scoring, the thrill and scare was intact.

The 44-minute soundtrack album has been pressed on a green 12-inch vinyl record stored inside a printed inner sleeve and single jacket. 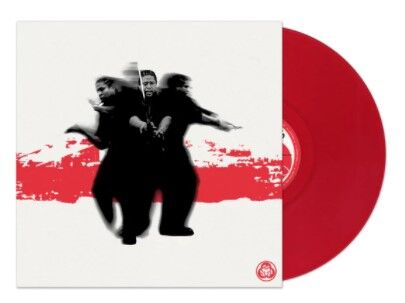 He is a hitman that follows the ancient code of samurai warriors.

The film’s Original Motion Picture Score was produced by The RZA and is now officially available on vinyl records.

All 8 tracks have been pressed on 12-inch vinyl records in red color. 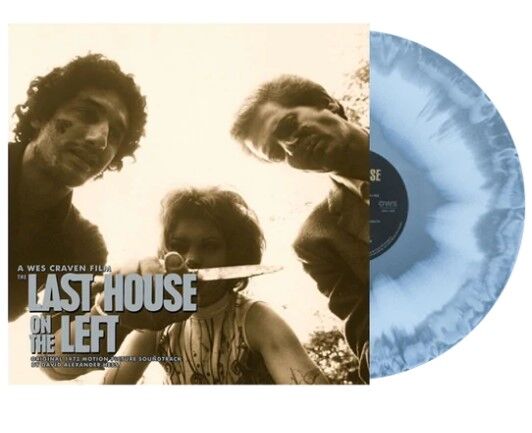 The film The Last House on the Left is Wes Craven’s directorial debut.

It’s a story that follows Mari Collingwood, portrayed by Sandra Peabody, who was abducted, raped, tortured, and killed by four criminals who unknowingly took refuge in her house.

Stephen Chapin and David Hess, who also portrayed Krug, one of the criminals, produced the film’s soundtrack.

One Way Static pressed the soundtrack on to vinyl records for the very first time and the design is a silver and white swirl. 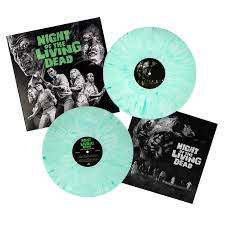 Night of the Living Dead by George A Romero is one of America’s national treasures.

The film is set on an abandoned house where a group of individuals took refuge in, not knowing that the corpses in its graveyard would be walking and preying on them.

The soundtrack was produced by Scot W. Holton and first released on vinyl by Varèse Sarabande.

For the film’s 50th Anniversary, a vinyl 50th anniversary edition was released by Waxwork Records. The tracks were pressed onto ghoul green vinyl records housed inside a deluxe packaging. 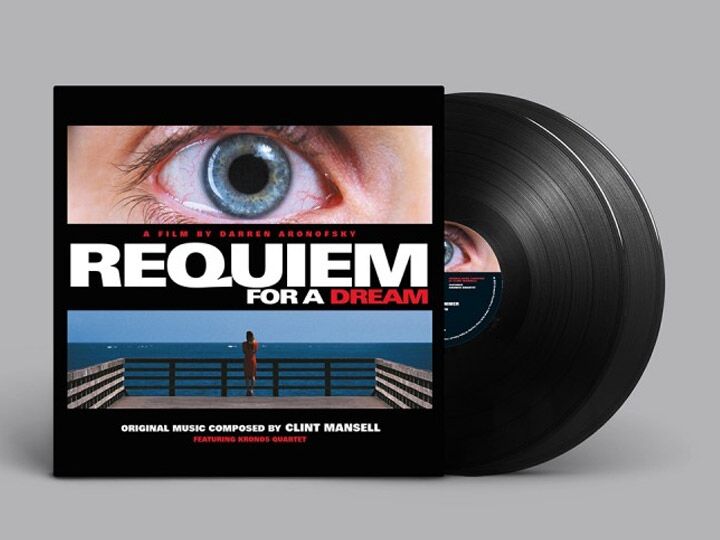 The film is a psychological drama film that follows four drug addicts and their entrapment in a world of delusion and depression.

It shows the audience how drugs alter their physical and emotional states resulting in their eventual destruction.

This depressing film’s soundtrack was composed by Clint Mansell and was pressed on vinyl on standard black records. 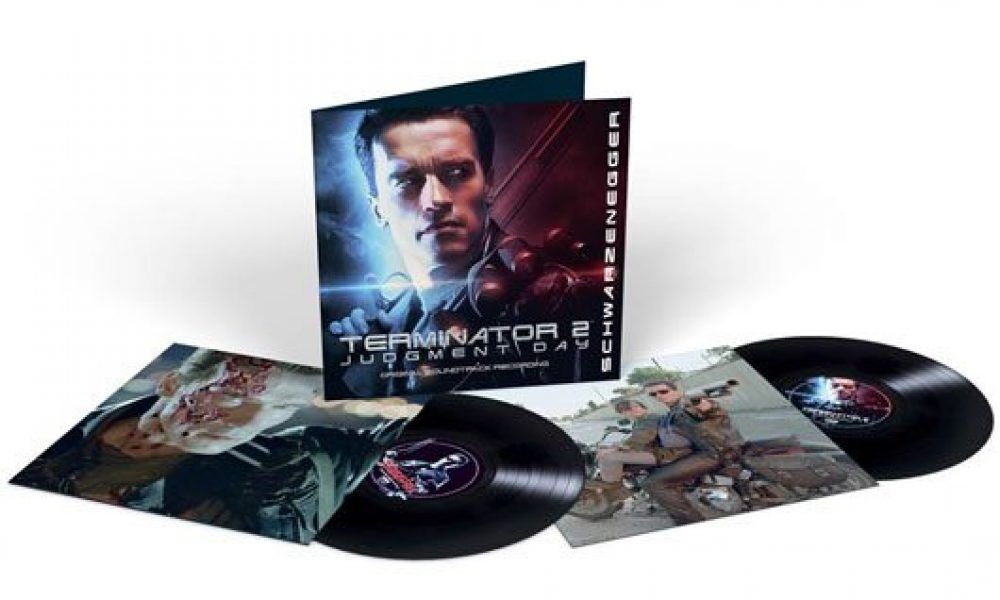 Last on the list is from the ever popular Terminator franchise.

Terminator 2: Judgment Day focuses on the time-traveling cyborg, Terminator, sent back to kill John Connor, Edward Furlong, the future leader of the resistance.

The film’s soundtrack was composed by Brad Fiedel, the former composer for the earlier installment.

The film’s tracks were pressed onto two standard black vinyl records which are housed inside printed inner sleeves and a gatefold jacket.

What soundtrack do you have in your vinyl collection now? What’s going to be the next buy for you?

10 DVD Box Sets With the Most Kickass Packaging

We all love good films but we usually just watch them in the cinemas and move on with our life unless they’re special editions packaged in really awesome DVD box sets that will impress even your grumpy father-in-law. If you’re a filmmaker, distributor, art director, graphic designer, your aim is to have this kind of reaction […]

Year 2022 has started and I am pretty sure that singles and albums from different musicians will be flooding our music playlists in no time. Before we let that happen, how about we look back on last year and see what songs have made 2021 bearable for us? Yes, we’ve already welcomed the year 2022, […]