If you’re a recent vinyl convert, chances are that before you go on a random vinyl shopping spree, you’d want to buy vinyl records of the famous artists like the Beatles.

I mean, you know each of their album is worth collecting because the music is good… so you can be sure you only get the good stuff. If you want to collect vinyl records from one band, then you must start with the fab four.

Here are the the most well-loved Beatles vinyl records of all time: 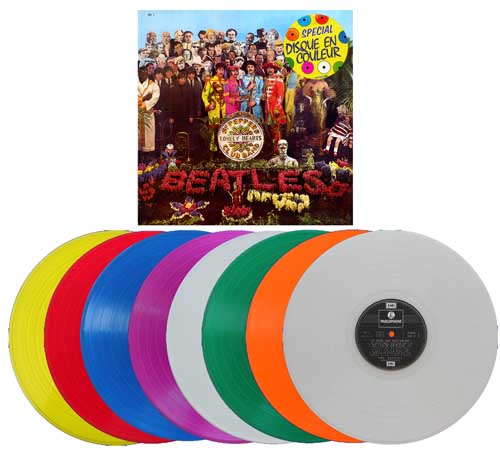 First on the list is the Beatles’ best selling 1967 album which sold over 32 million copies. This vinyl edition of the album was released in the Netherlands in 1979.

The reissue came with the iconic cover of the album printed on the front of the gatefold jacket, along with a yellow colored vinyl record accented mostly on the sides with brown color. It also includes an insert of heavyweight stock with Sgt. Pepper cut-outs. 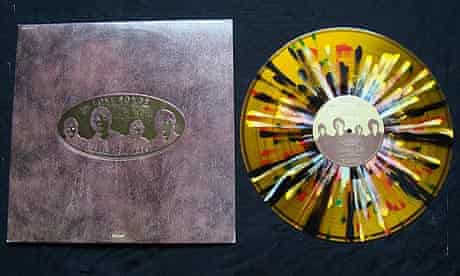 This copy of the Beatles’ Love Songs compilation album is a rare one and was unofficially released by a former worker of Capitol Records pressing plant. This special copy of the album, made by a vinyl guru, is the best among their many special creations.

The vinyl record is gold in color and it is streaked from the center out with different colors, somehow mimicking a rainbow explosion. The awesome vinyl was housed by a single jacket with the original album cover gracing the front cover in gold foil. 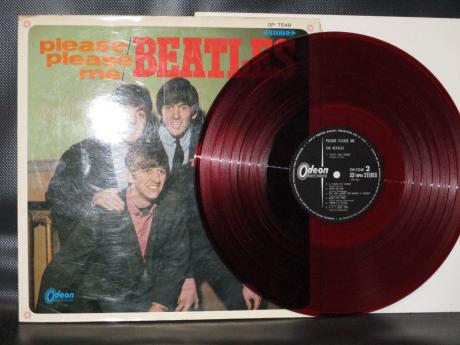 Offered for sale is an original red vinyl Japanese pressing of Please Please Me by the Beatles, including the original obi and a unique, Japan-only gatefold cover.

Please Please Me was originally released in March 1963 and was the band’s studio album debut. This edition with the green apple plastered at the center label of the red vinyl was a Japanese pressing by Apple Records.

For the packaging of the vinyl it is a gatefold jacket with the Japan-only album cover printed across its front side. The album also includes an 8-page booklet with pictures of the members and lyrics of the tracks in English and Japanese.

The studio album is known by many for its controversial cover named “butcher cover”. Because of the outrage it got from record retailers, they had to replace it with the members sitting on a steamer trunk.

If you’re wondering what the infamous cover looks like, then there’s no need to look far, because it’s printed across the jacket of this copy.

I don’t really get why there was such a response from this, however, it was in a very different timeline from ours so we will never really know. In addition to the butcher cover in the jacket, the album includes a blue-green see through vinyl record. 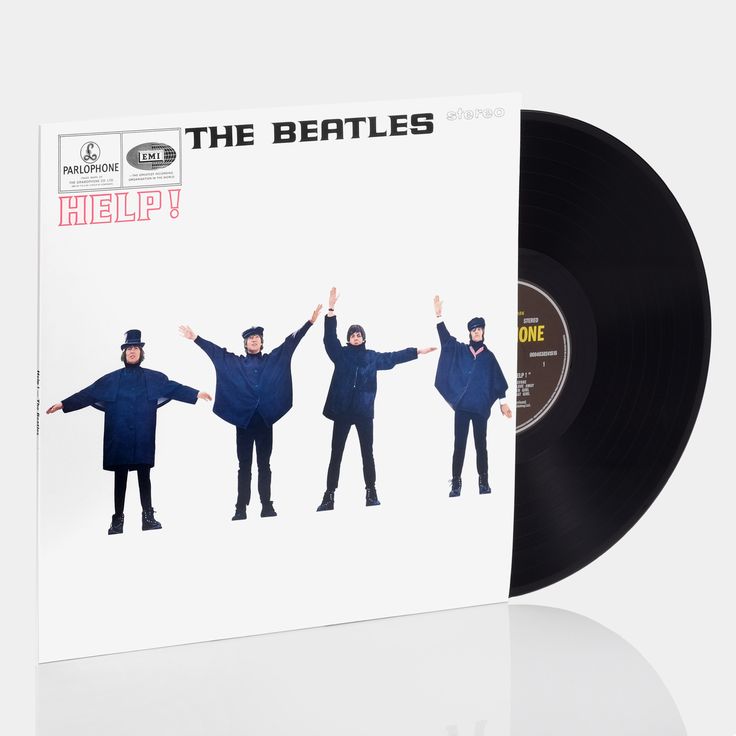 Help! Album has a total of fourteen tracks pressed onto vinyl records. The first seven tracks of the album which occupies the first side of the record are soundtracks to the band’s musical comedy-adventure film of the same name.

The idea behind this vinyl album’s packaging is the flag semaphore of the word “help”. However, they had to improvise since the arrangements of the arm do not look appealing when put together.

This resulted in the released cover which spells “NUJV” for the UK Parlophone release. 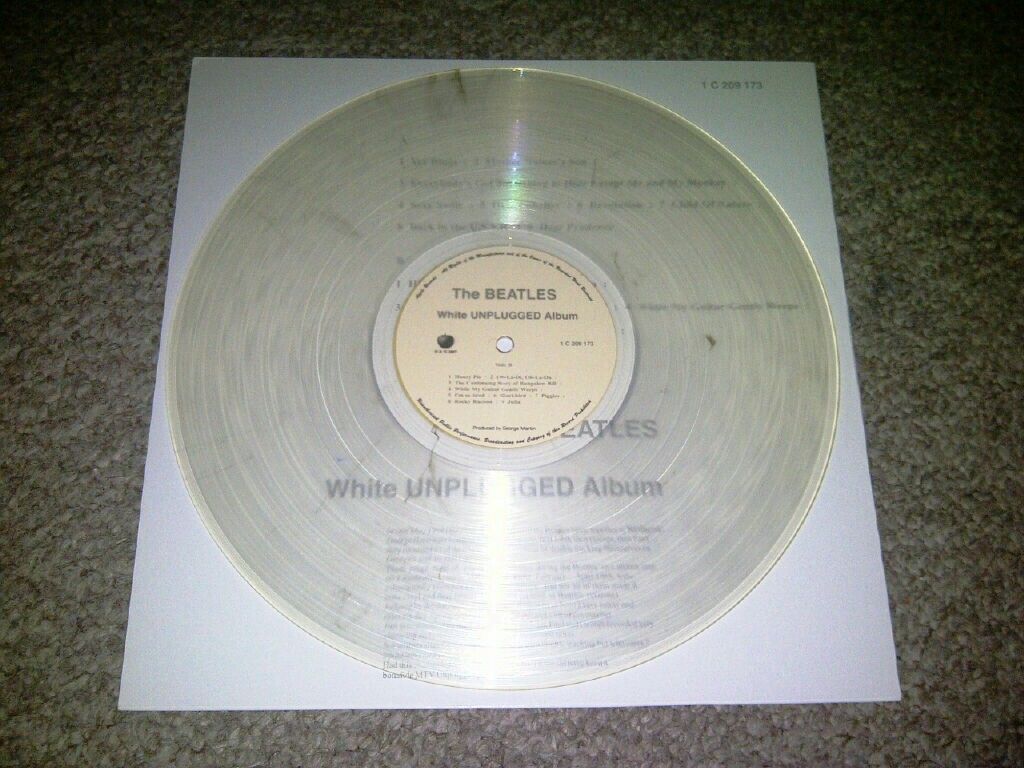 The Beatles album is also called the “White Album” for a reason and that has something to do with the vinyl album’s overall white packaging. Additionally, there has been a white vinyl record edition of the album.

Now with the unplugged version of the album, we have a very clean white vinyl record. They are housed by white vinyl jackets printed with the band’s members in black and white on the bottom part of the front side. 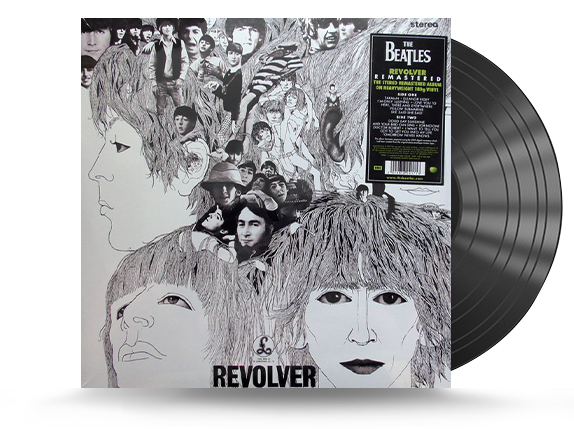 The 1966 album of the band entitled Revolver is the second best selling vinyl record from them. It apparently sold approximately 27 million copies since its release, and we have to give credit not only to the band for making great music, but also to their record label who released them for us.

This remastered pressing of the band’s Revolver was released by their UK label Parlophone in 2012. The remastered album’s jacket retained the original cover with a collage of the members printed across the front cover, both drawn and photographed.

#9 LET IT BE VINYL RECORD 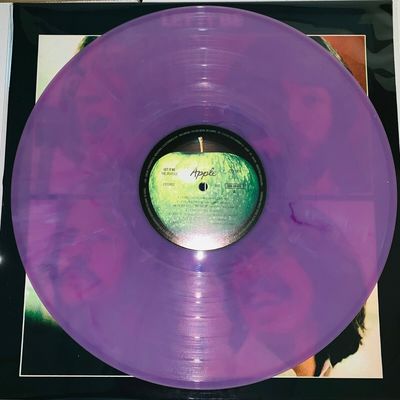 Let It Be is the band’s twelfth and final studio album before they decided to separate ways. Much like most of their re-releases and reissues, the vinyl jacket has the original cover of the album on the front cover.

The only addition to this vinyl edition is the violet, almost see through vinyl record it’s jacket houses. 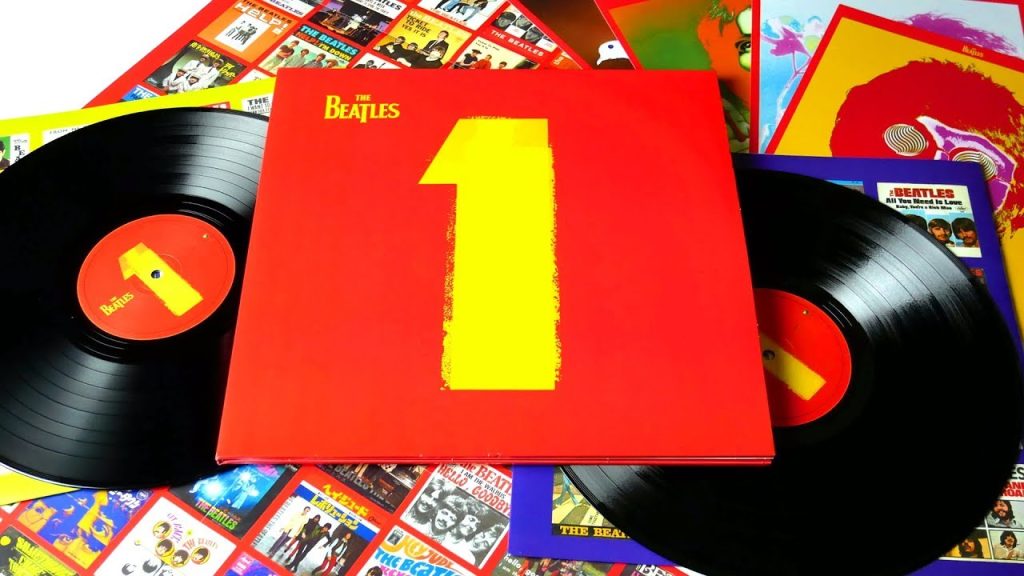 The Beatles’ compilation album entitled 1 was originally released on the 13th day of November in the year 2000. It is composed mostly of the band’s songs that hit number 1 in the UK and the US which naturally made the compilation album break records. 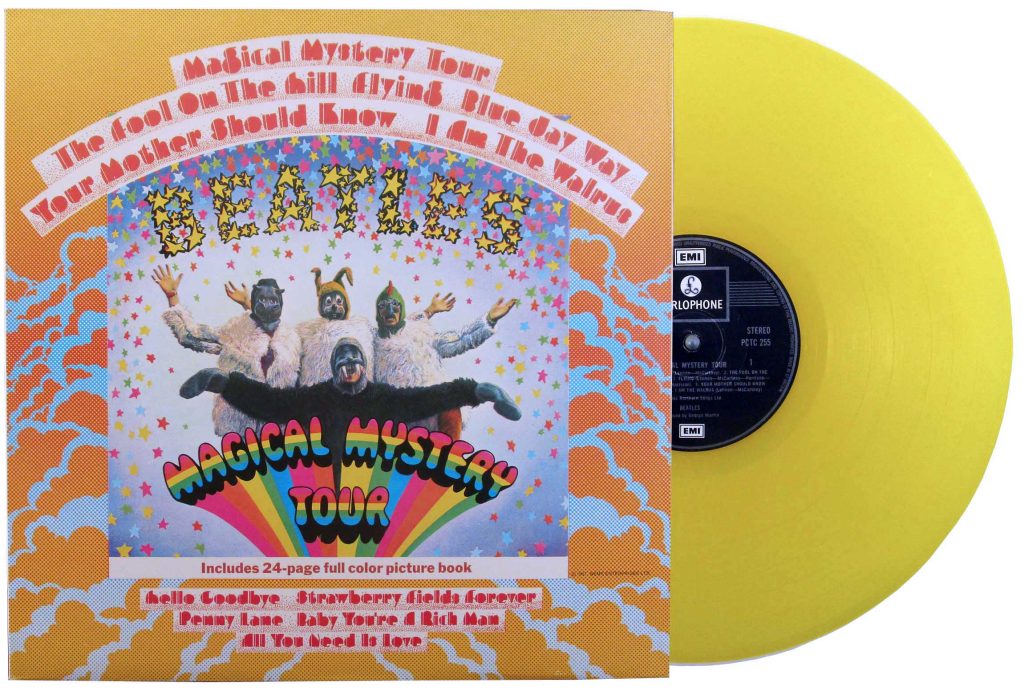 Magical Mystery Tour was offered for sale as a double EP in the UK and as an LP in the US. It was an album composed of tracks from another one of their films which is also named the same as this album.

This copy of the vinyl album with the tracks pressed on beautiful yellow custom vinyl records were exclusively pressed by the Parlophone label for exportation to the US.

The cover of the album as well as the promotional poster of the musical film was likened to a child’s TV cartoon with three of them wearing white wool like costumes and one with black. 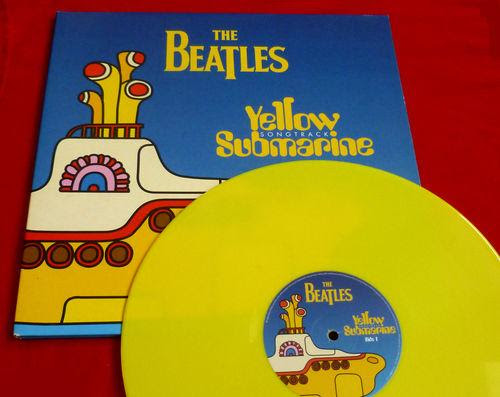 If the previous vinyl album seemed like a child’s cartoon film, this one is the real deal. And it is, apparently, another soundtrack album for another film, eponymous to the album, directed by the band.

The vinyl jacket of the album is a gatefold one printed with an animated yellow submarine on the front cover with the inner side printed with animated characters and things. This jacket is paired with a single solid yellow custom vinyl record. 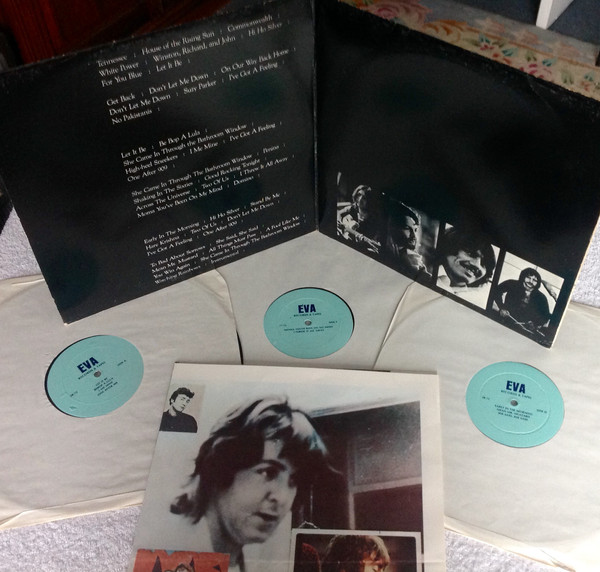 If there’s an album called the “White Album” from the Beatles, it’s just to have one opposite it. The funny thing about the blakc album is that it is an unofficial compilation album of the Beatles’ member’s songs after the band’s break up in 1970.

It was compiled by longtime fan of the band, actor Ethan Hawke, which he presented to her daughter on her 13th birthday. It is composed of 51 tracks which resulted in the three standard black 12-inch vinyl records for it. In contrast to the White Album, The Black Album has its records stored inside a black vinyl jacket.

The Grammy season is just round the corner and we are thrilled seeing these badass Grammy nominees for Best CD Package. We’re so thrilled because this is totally our thing! We here at Unified are obsessed with beautiful CD packaging. We’ve been making creative releases since 2008 and lovely packaging has become an obsession of […]