The report shows the numbers post-COVID 19 which makes this very valuable. Inside the report are insights and information on how the market was impacted after the pandemic. In addition to this, it was grouped by product and geography data.

There are two categories for the products, the LP/EP vinyl records and single vinyl records. For the geography, there are five which are North America, Asia-Pacific (APAC), Europe, South America, and Middle East and Africa (MEA).

The market research report is not open for everyone to see and read. Additionally, the free sample report is hard to gain access to. Because of this we will not be able to tell you the full report.

However, here is the information we could salvage from the news and reports made by other media outlets about Technavio’s latest market research report.

HIGHLIGHTS OF THE REPORT 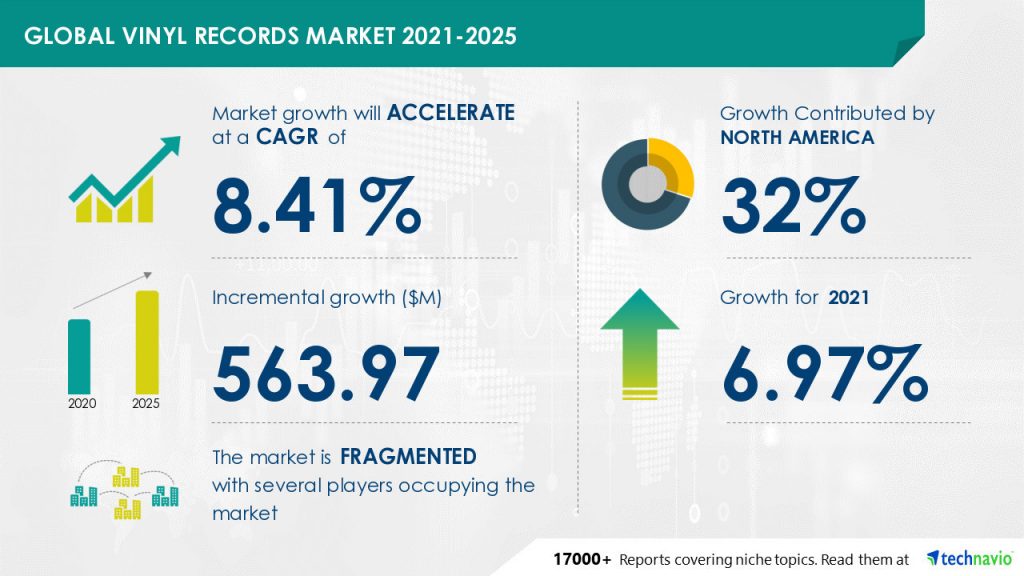 This means that as time passes by there will be more and more products, LP/EP and single vinyl records, that will be sold. So manufacturing companies need to up their game to get more customers to choose them for vinyl pressings.

In addition to the expected market share increase there is also an expected acceleration of the market’s growth with a compound annual growth rate (CAGR) of 8.41%.

For last year’s year-over-year growth rate we see an estimation of 6.97%. With this report, we can foresee that there will be an increase for each year that will be passing by. 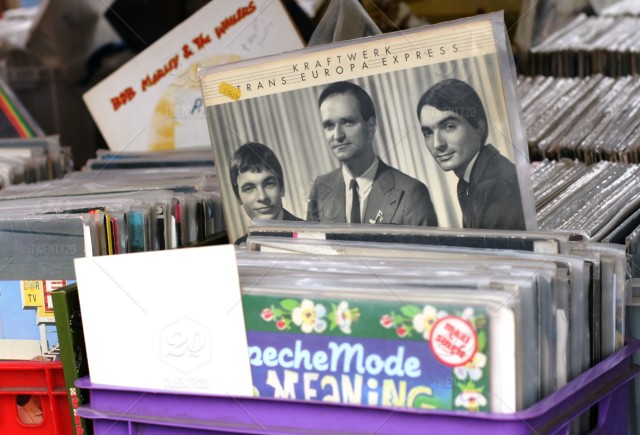 We can also see that Technavio found the vinyl records’ market as fragmented. This means that there are quite a number of players in the market. These players are the vendors utilizing both organic and inorganic growth strategies to help compete in this small, yet growing, fragmented market.

And the biggest contributor to the market among the five geography categories (North America, APAC, Europe, South America, and MEA) we see North America which will be contributing 32% to it during the forecast period.

According to the research report, the driver of the growth of the current vinyl records market is the aesthetic appeal of the format. During the course of music history, there have been a lot of changes to it as well as the medium that holds it, in form and in content.

However, even in this digital age, where online music streaming and digital consumption of music is the norm, the vinyl record format has prevailed and has now become one of the most sought after audio formats, especially in the pop and rock genres. 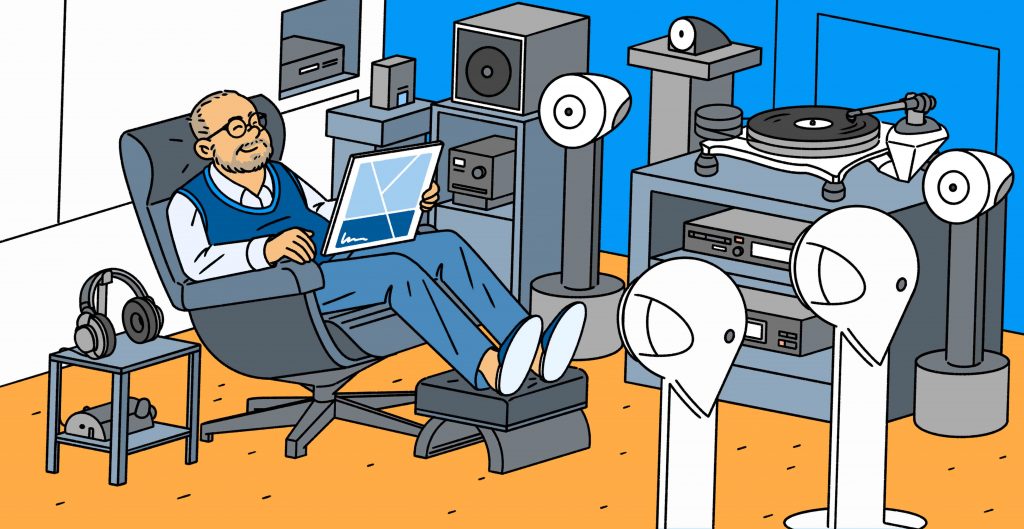 Most buyers of the format are audiophiles, collectors, and DJs who treat the format as some kind of prized possession. Even when these formats are already scratched and unplayable, they will still take care of them. That’s how valuable they are to them, some might not even play them and just store them for their collection.

In developing countries, a trend that is happening in the vinyl records market is the creation of promotional events or activities for the format. The most popular of these promotional activities is Record Store Day.

This event helps promote the vinyl record format to younger generations since there is at least one day in a year for the format to be highlighted. On this day new and old generations get to enjoy cruising through record stores to look for cool and amazingly designed vinyl records to buy and bring home.

During this event, there are thousands of artists that send their vinyl records to stores participating in this event. Most vinyl pressings sold on this day were exclusively done for this day only, which make them rare and limited copies of the vinyl album.

The main challenge of the vinyl records market is its high demand. Even if this is a factor to help in the growth of the market, the overwhelmingly high demands cannot be supplied efficiently by the players of the market.

There is a limited number of factories that create and manufacture the needed materials to produce the format. And there are also not enough pressing plants for the thousands, maybe even millions, of labels that demand their services and products.

There are already vinyl production problems as well as delayed orders, especially to independent artists, due to the high demand and lack of pressing plants.

According to Technavio’s report, there are only two companies that produce lacquers, one in Japan and one in the US. These two companies are providing lacquer worldwide and that is a problem because there are tons of plants that need them to make their master lacquers. 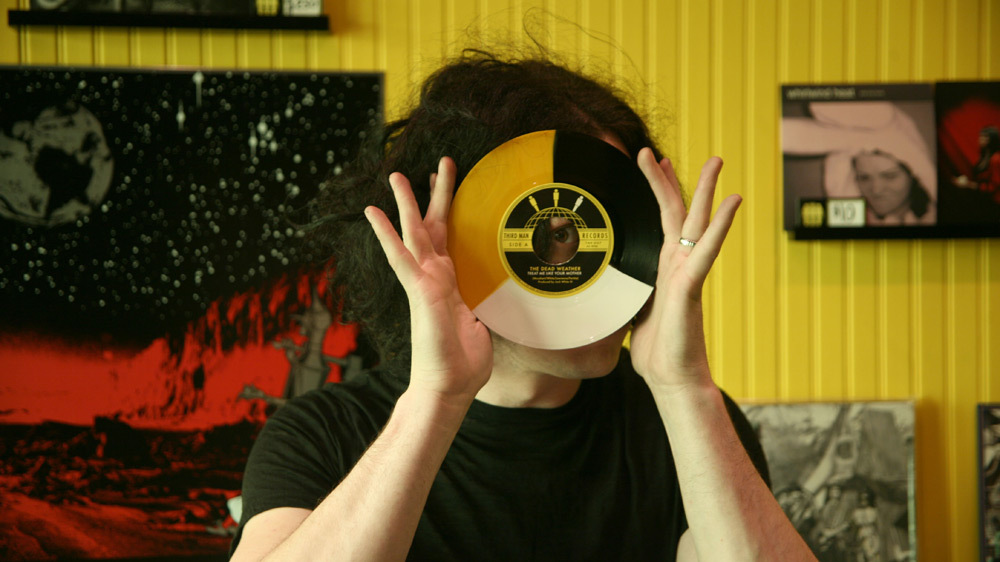 This challenge on the market is what Jack White, the lead singer and guitarist of White Stripes has been pointing out in his message to major labels last March 14, a day before the latest market research report from Technavio was released. Jack White, the founder of Third Man Records, has been encouraging fellow major labels to open their own vinyl pressing plant.

Last 2017, White and his label opened its own vinyl pressing plant that is still in operation until now. He delivered his message in two ways, one through a written statement and the other through a video.

The video message he made was titled “A Plea To The Three Global Major Labels From Jack White”. The message is obviously aimed at the executives of Sony Music Entertainment, Universal Music Group, and Warner Music Group. 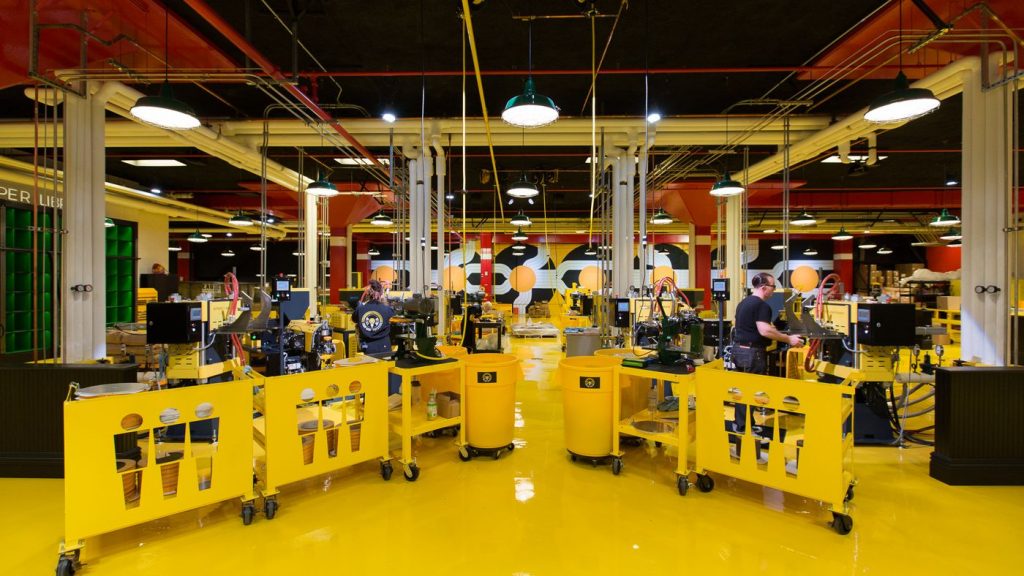 And we know how important time can be for any artist releasing music, because it is all about the trend, the timing, it is everything. This delay will surely be the reason for everything an artist has planned to be destroyed.

“It’s 2022 now and it’s no longer a fad. Vinyl records have exploded in the last decade and their demand is incredibly high,” White says in the video. And according to the latest market report from Technavio, it is true. However, White says that this is not about big and small labels, “… it’s not independent versus mainstream, it’s not even punk versus pop. The issue is, simply, we have ALL created an environment where the unprecedented demand for vinyl records cannot keep up with the rudimentary supply of them.” And since these three big music labels have the means, why would he not reach out to them.

Aside from making artists’ waiting game shorter, three additional pressing plants from these groups would also mean help for other pressing plants. Sure there will be more players in the market and fewer customers running to a plant, but at least pressing plants will be able to ease their shoulders a bit.

Since there will be fewer pending orders to think about, they will be able to have better production results.

Here is the full written statement for Sony, Warner, and Universal Music Group by White:

At least once a week, without fail, someone will reach out asking me to help expedite their vinyl record manufacturing. It’s a natural thought… knowing that I own a pressing plant and have my own record label, “if anyone could help, it’s this guy!” 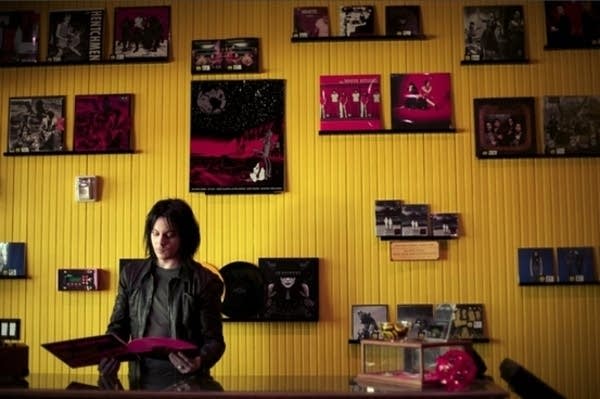 With industry-wide turnaround times for vinyl currently leaning towards the length of a human pregnancy, it’s obvious, in a world so contingent on being of-the-moment and timed just right (a single, an album, a tour etc.), these timelines are the killers of momentum, soul, artistic expression, and far too often, livelihoods.

I’ve done everything within my power to help. Third Man Records began a concentrated focus on vinyl in 2009 with hopes of exposing its wider potential to the farthest reaches of the music industry.

In 2017 I furthered my commitment by opening Third Man Pressing… a plant which has always been open to anyone and everyone who walks in the door and wants to press a record, from bedroom hip hop artists to field recording documentarians.

And in the last year, I’ve doubled down and invested in even more record presses, more employees to run them, and more shifts to try and accommodate the insane growing demand for vinyl product.

There are people who will say – isn’t this good for Third Man? More demand than you can handle? To which I say, even though Third Man benefits in the short term, in the long term it ultimately hurts everyone involved in the vinyl ecosystem given the bottlenecks and delays. Something needs to be done.

While the entirety of vinyl investment and framework in the past decade has originated from independent companies and investors, the bigger problems we now see require major solutions.

In this spirit, I turn to our collegial big brothers in the music world, Sony, Universal, and Warner, and politely implore them to help alleviate this unfortunate backlog and start dedicating resources to build pressing plants themselves.

To be clear, the issue is not big labels versus small labels, it’s not independent versus mainstream, it’s not even punk versus pop. The issue is, simply, we have ALL created an environment where the unprecedented demand for vinyl records cannot keep up with the rudimentary supply of them.

Across the globe, there are now a handful of NEW companies, building both automated and manual vinyl presses. It’s easier to purchase a vinyl press now than it has been in four decades. And with more ancillary innovators popping up every day helping advance every facet of the industry, this isn’t a difficult decision to make. It’s a no-brainer.

We’re all on the same team with the same goals. I truly believe that with a good faith investment in the infrastructure that got us here, we can continue on this upward trajectory and further inspire the worlds around us. Now is the time. Thank you.

Now that there is a more concrete set of data pertaining to the vinyl boom, vinyl comeback, or vinyl resurgence phenomenon, maybe there will be more movement on the side of the major labels to help in resolving the growing problem.

If there is no solution made, I am pretty sure there will be more problems for the market in the near future which might engulf it and cause the decline of the market.

How to Keep Your Creative Inertia Going

Creative Inertia: the tendency of a creator at work to stay at work unless allowing an outside force to act upon them. Do you notice that when you decide to do something and you really have the self-discipline to do it regularly, you gain esteem from it? Same goes with the things you decide NOT to […]