If you’re into metal and heavy metal genres, then first of all—you’re awesome.

But not as awesome if you own heavy metal albums in vinyl.

If you still haven’t got a collection of metal classics, then don’t be shy and scroll down through our list of top 10 vinyl records under the genre. 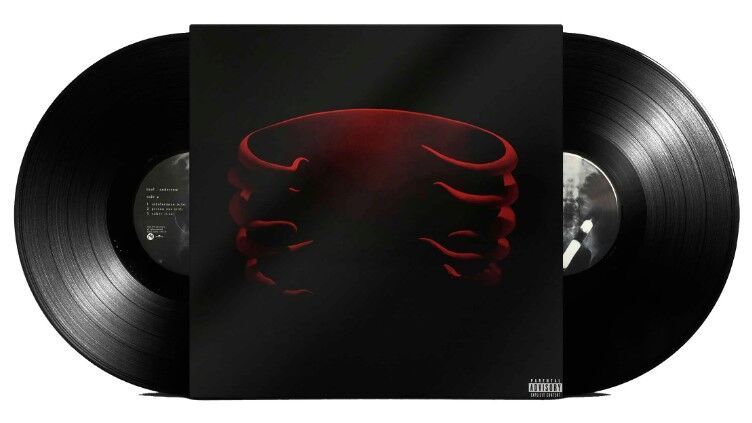 Tool is one of the not so prolific metal bands that are still active today.

With over 30 years spent in the music industry, they only had five full studio albums released. Fear Inoculum was their latest album which was released in 2019.

But even with limited discography and the lack of hit singles, the band was able to rally one of the biggest cult audiences in the history of metal.

They hit it big with their debut album Undertow in 1993, at the height of the alternative music movement.

Undertow has a handful of other album covers, but the ribcage one is just so dark and bone-chilling, just like the album’s music.

If you’re wondering then yes, that pun was intended. But jokes aside, don’t you feel it too? 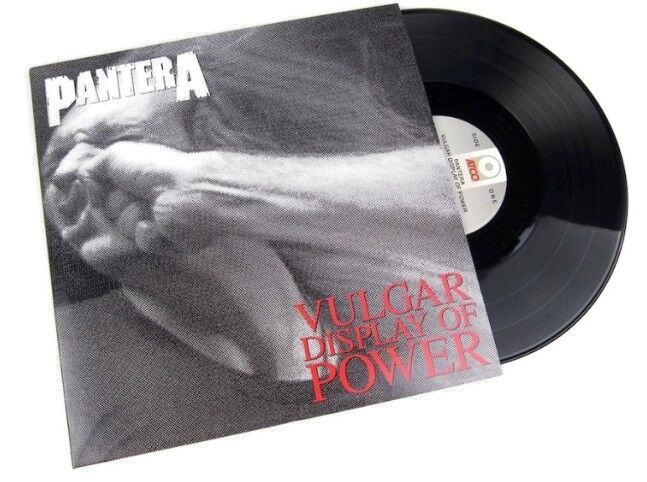 Pantera was the band for metal fans in the 80’s and 90’s who felt that Metallica was just not rocking it hard enough.

Though they already had a dedicated fan base, they gained more after the release of Cowboys From Hell, and even more after two years when they dropped Vulgar Display of Power.

The 11 tracks were pressed onto 12-inch vinyl records in standard black color which are housed by single printed jackets.

The cover of the jacket showcases a photo of a man being punched in the face implying that violence is a vulgar display of power.

This was a shot by Brad Guice, the photographer who also took the shot for the Cowboys From Hell cover. 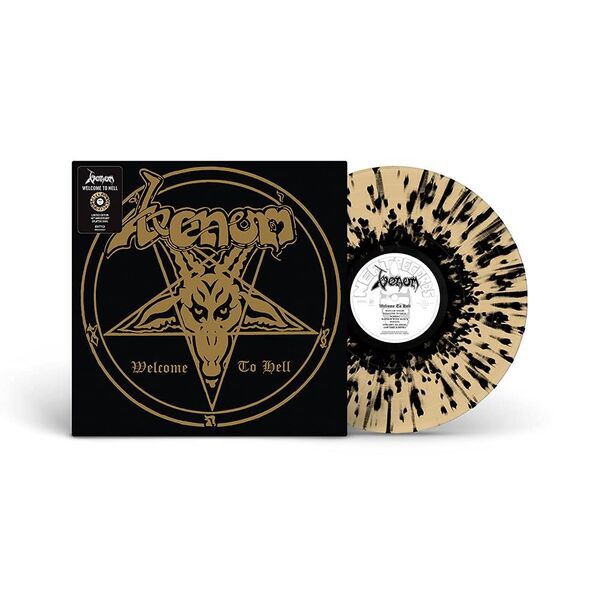 Welcome to Hell was released in December 1981 and is Venom’s debut album.

The album tracks were some of those that influenced the tracks of the band’s second album, which were far more successful. Among them is one of metal fan’s ultimate anthems, Witching Hour.

For the band’s 40th anniversary, Venom released a custom vinyl record album in 2021 for their debut album.

The original album cover was retained while the record is a cream colored one splattered with black to match the cover.

Check out our custom vinyl record 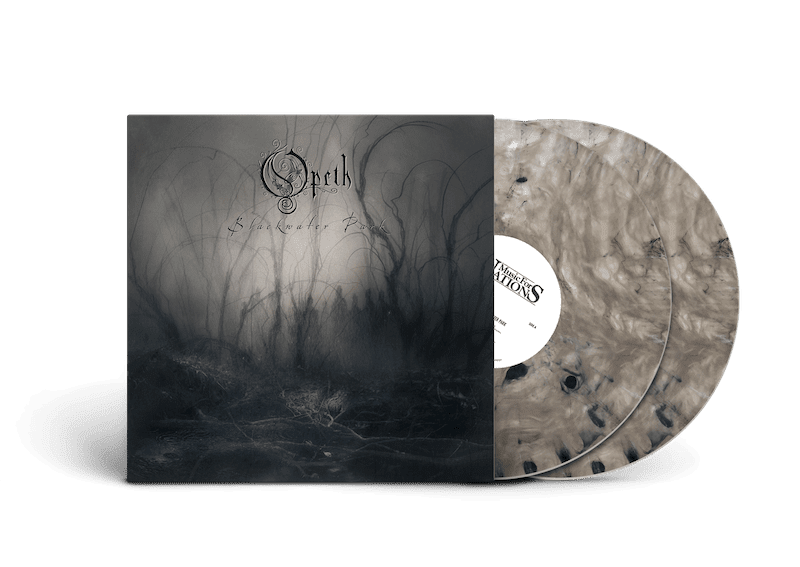 Opeth reached their music’s best form with their fifth studio album. The marvelous album, Blackwater Park, was released in 2001 with back to back awe-inspiring tracks.

The vinyl edition includes a gatefold jacket that retained the original album cover, the two 12-inch custom vinyl records matching the smokey design of the cover, and a 24-page artwork booklet. 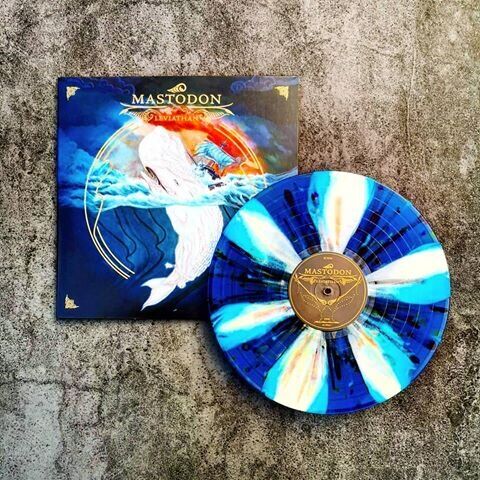 Even before their 2004 album Leviathan, Mastodon had already been separating themselves from the typical American metal bands.

With the Moby Dick-inspired album, the band just cemented the fact that they are creating a path of their own.

And with that, they are recognized as one of the most important American heavy metal bands next to Pantera or Metallica.

The impressive album has a limited vinyl edition with a custom vinyl record. It’s in royal blue designed with bone white pinwheels and rainbow splatter.

The jacket has the same color scheme with an aquatic creature as the highlight of its artwork.

#5. CELTIC FROST – TO THE MEGA THERION 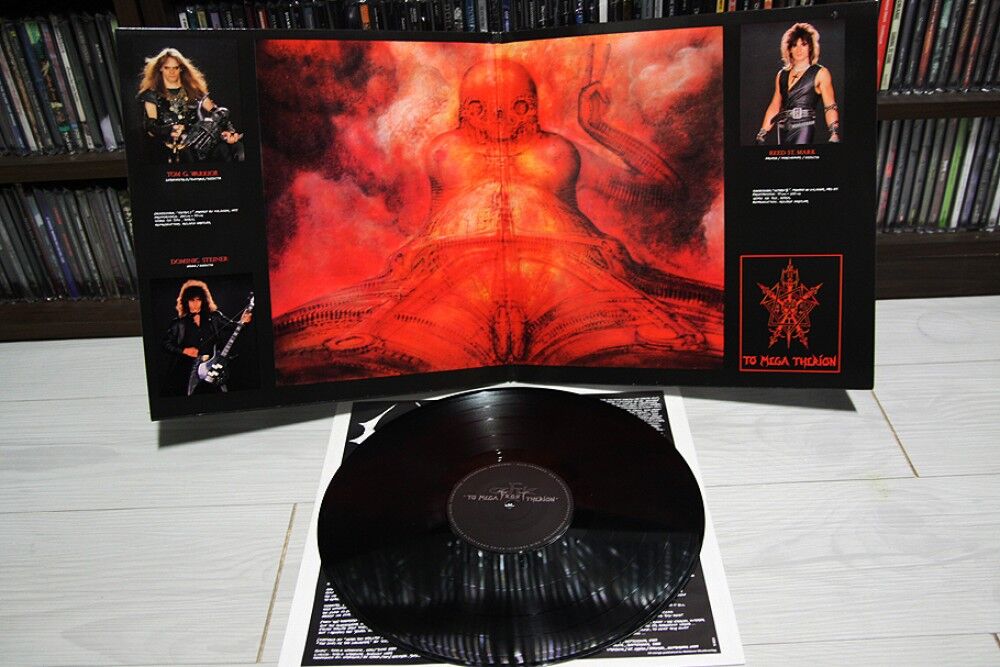 Being a pioneer in the extreme metal genre, Celtic Frost’s every release was influential on the musical trends.

The band’s 1985 album To Mega Therion, with mega therion meaning great beast in Greek, was another legendary album from them.

It introduced classical influences into their metal music. Paired with H.R. Giger’s memorable profane artwork pieces for the album, it’s just too much to just forget. 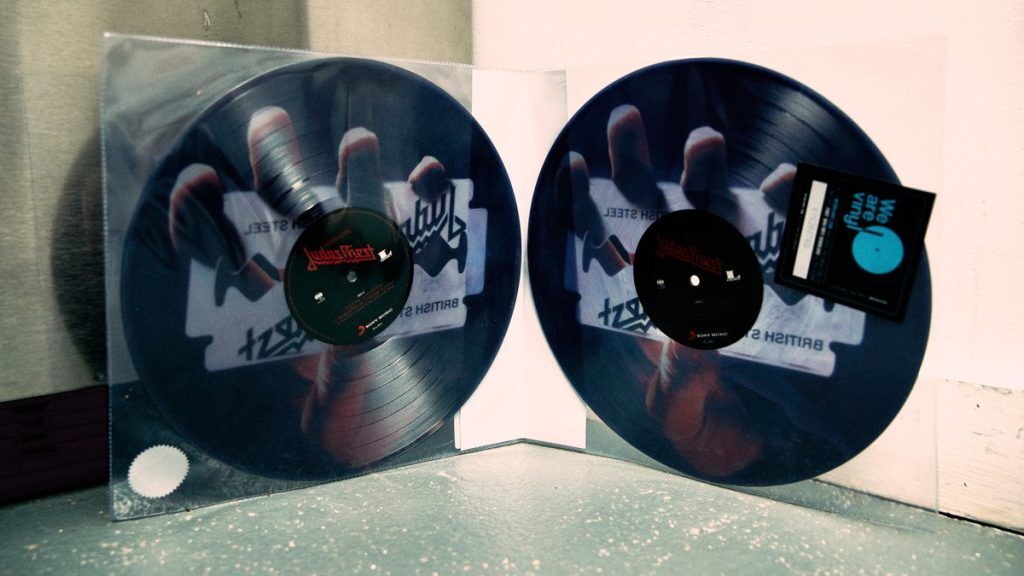 Judas Priest’s heavy metal classic British Steel is something that should really be on your shelves.

In the times when there was a rise of New Wave of British Heavy Metal, the band didn’t compete with it.

They instead simplified their songwriting which can be heard in their timeless tracks like Breaking the Law, Living After Midnight, and Metal Gods.

The album was re-released on custom vinyl records that feature artwork on the actual record’s surface. 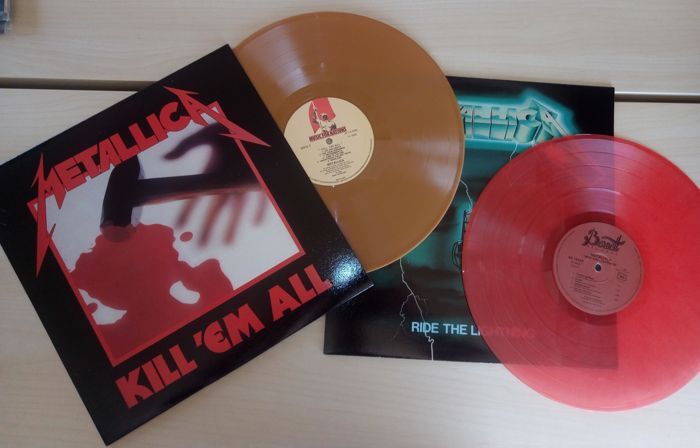 Of course, we won’t ever forget to insert at least one of Metallica’s albums.

Kill ‘Em All, is the band’s debut album released in 1983. It was one of the most influential albums that resulted in the genre’s dominance by the end of the decade.

Though their following albums are much more improved compared to this we can’t waive of the classic songs from the album like, Whiplash, Seek & Destroy, and The Four Horsemen. 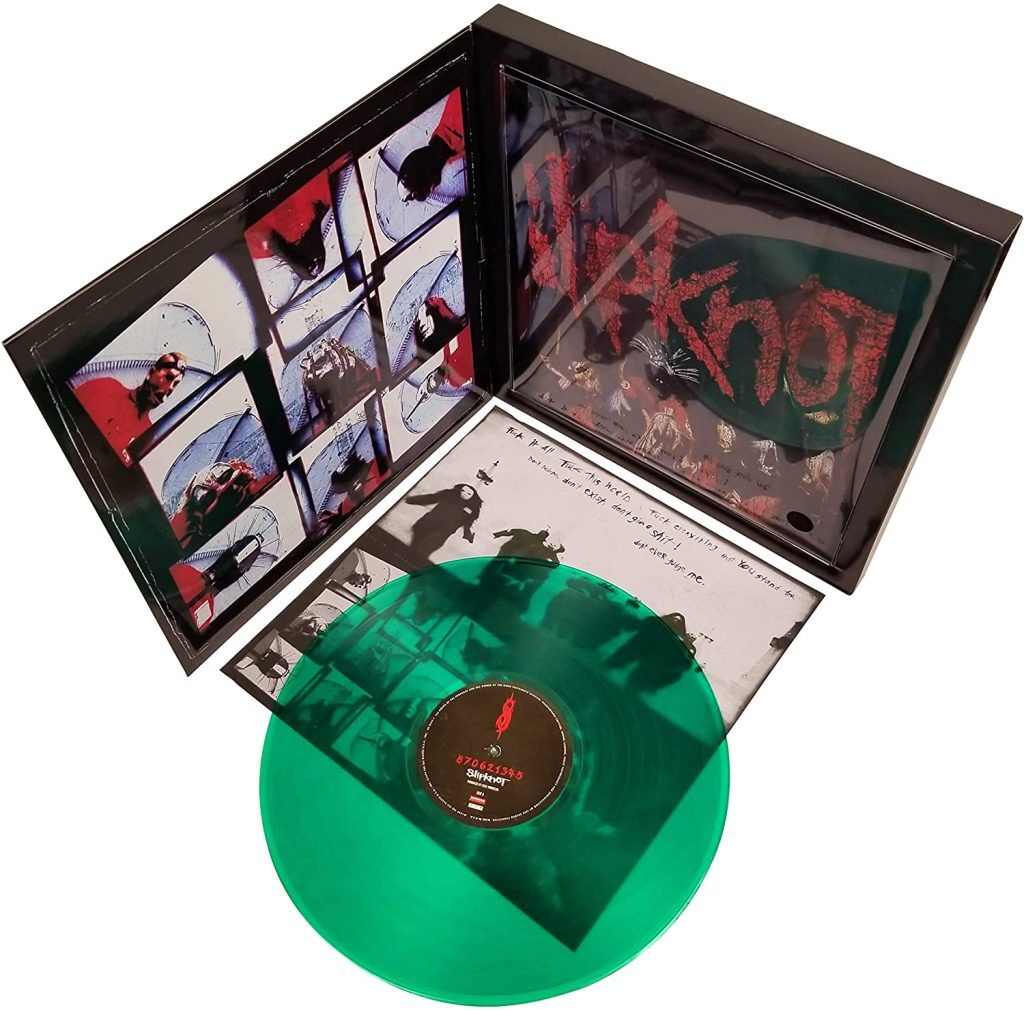 Slipknot is known for their attention grabbing masks, aggressive music style, and energetic and live shows. They rose into fame right after releasing their self-titled album in 1999.

The band has released a lot more albums that gained more success than their first, but Slipknot was one that captured the fiery band and their most ambitious moment.

#1. IRON MAIDEN – THE NUMBER OF THE BEAST 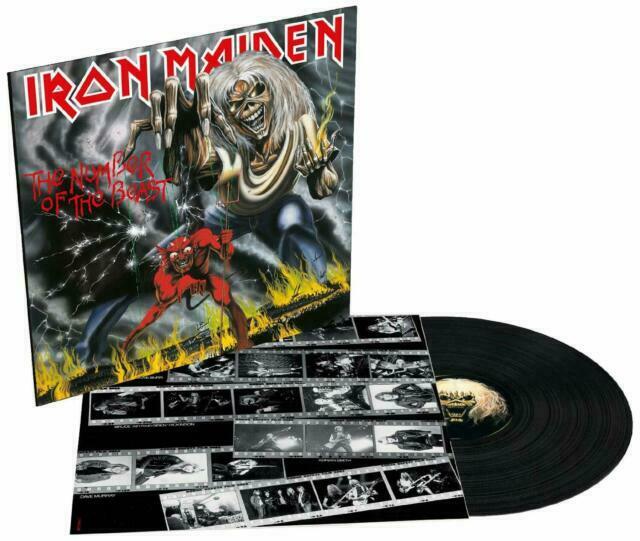 Iron Maiden’s decision of removing Paul Di’Anno from their band line up and replacing him with Bruce Dickinson was one of the bestest decisions they have ever made.

It was a pivotal moment for the band as Dickinson’s vocals arrived in time when they were perfecting their guitar duels.

They complimented each other which resulted in one of the band’s best albums, The Number of the Beast. The album topped no. 1 in the UK Albums Chart and its single Run to the Hills even charted in the top 10 in the UK Singles Chart.

So have you chosen at least one album to add to your collection of vinyl records?

We hope this list helped you find more gems that you’d be treasuring for long. Some of these might be hard to find a copy to buy, though, so I’m wishing you good luck.

We here at Unified are obsessed with beautiful vinyl packaging. We’ve been making creative releases since 2008 and lovely packaging has become an obsession of ours. We even have a Pinterest page dedicated to all things media packaging. If you want to make a really badass album with cool CD packaging, get a quote or shoot us an […]

Pink vinyl records look as sweet as candy that’s why it’s interesting that a lot of rock bands choose them for their albums… and they look so cool! If you’re a metal/punk/rock band, you’re likely “locked” in the colors black, red and white for your website, merch, CD packaging, and uhmmm… everything else. That’s the […]