Blur, Pink, Spice Girls…if you’re like me whose taste in music is still stuck in the 90s, then you’ll love these 90’s musician box set.

Here are some of the best box sets from the 90’s that you can still buy from online stores. We’re drooling. We want them all! 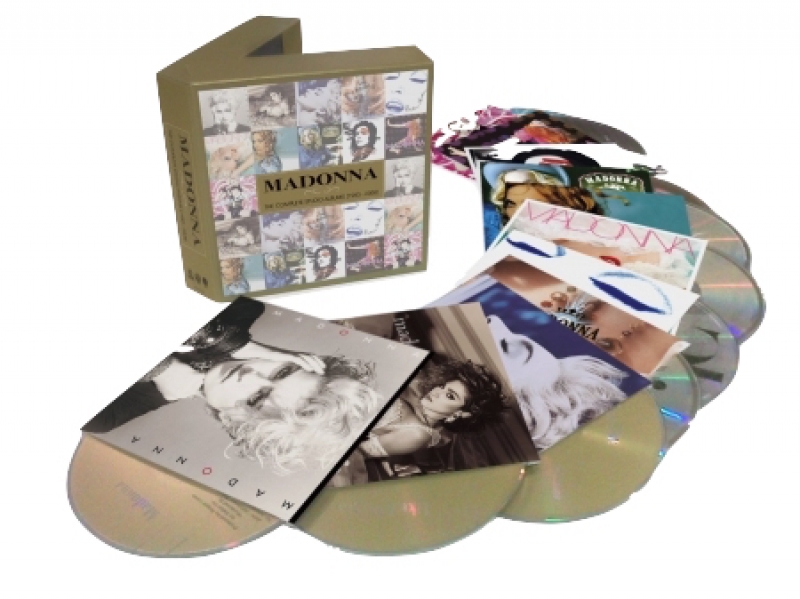 The Queen of Pop’s  is a limited Japan 11 CD box set. There’s no re-release of this album though, so all that you’ll be getting would be a second-hand one.

The box set comes with a golden box housing 11 CD duplications of eleven of Madonna’s studio albums. The eleven albums included in this box set are Like a Prayer, Erotica, Bedtime Stories, Ray of Light, Music, American Life, Confessions on a Dance Floor, and Hard Candy, as well as three remastered albums, namely, Madonna, Like a Virgin, and True Blue.

The album covers for these 11 albums are printed on the individual jackets that protect their respective CDs. Nirvana’s last album In Utero celebrated its 20th Anniversary last 2013 with a deluxe edition of the album. This would be an awesome gift to receive if you’re a Nirvana fan because it has lots, and I mean LOTS, of never-been-heard and never-been-seen demos and footage of the rock band.

The price of the box set on Amazon is currently $299.98 and it’s a justified one. The box set comes with 2 CDs containing remastered tracks of the album, numerous remixes (both 2013 and 1993 mix), assorted b-sides, and demos.

The other CD contains the tracks from the Live & Loud live show at Pier 48, Seattle held on December 13, 1993.

The DVD also contains the performances of the same tracks from the last CD along with unreleased rehearsals for Live & Loud, original music video and director’s cut of Heart-Shaped Box and 7 European TV performances.

It also includes a book with 60 pages of unreleased photos, documents and many more artifacts of the In Utero era and a double-sided poster. 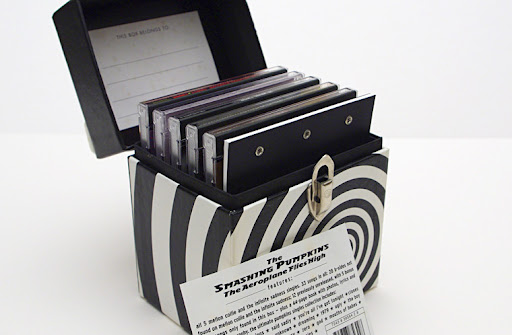 The Aeroplane Flies High is a box set released by the alternative rock band, The Smashing Pumpkins, in 1996. The set was actually a limited one but due to the high demand for it, there were additional copies released.

The box set is composed of 5 CDs and a booklet. The 5 CDs are CD duplications of the extended versions of five singles from their third studio album, Mellon Collie and the Infinite Sadness.

The booklet has 44 pages printed with pictures, lyrics, and writings from Billy Corgan. All of these are put inside a box printed with black and white swirl and a metal clasp. 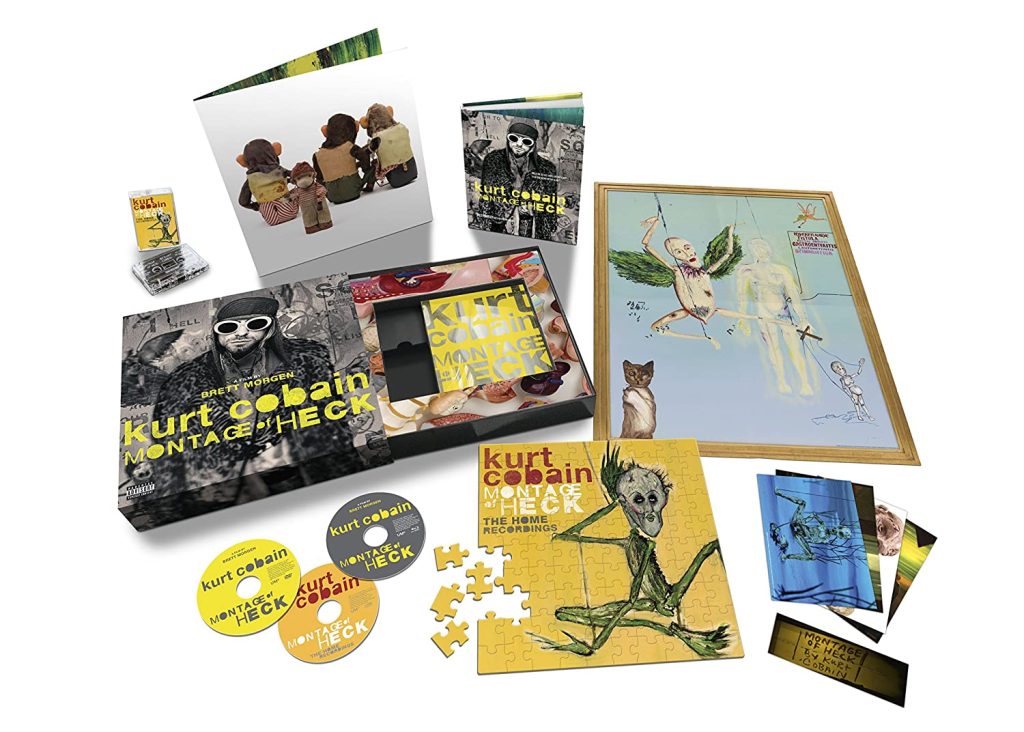 Montage of Heck is a 2015 documentary film directed by Brett Morgen about Kurt Cobain, the deceased lead singer of rock band Nirvana.

The box set has a lot of artifacts inside its box, there is a Blu-ray disc and a DVD disc of the film both with additional 48 minutes of bonus interviews and a CD disc and a custom cassette tape holding 31 deluxe soundtrack of the film.

It also includes a hardbound book with 160 pages that covered interviews and images from the Cobain archive, a puzzle with storage container, a movie poster, a bookmark and four postcards. It’s a jam-packed box set that would surely please any receiver. 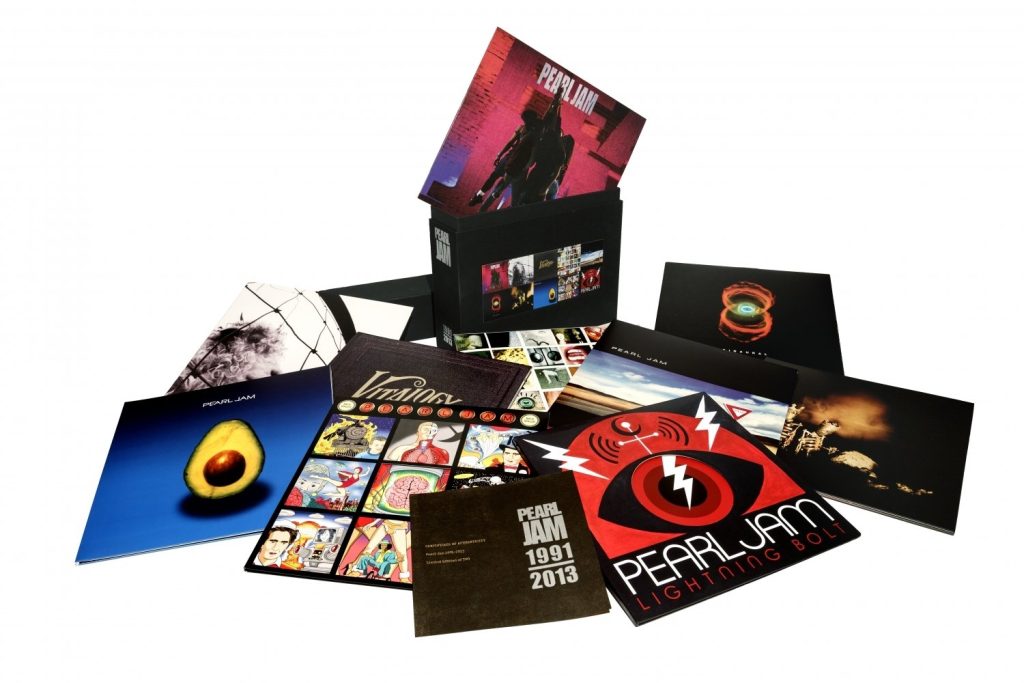 Ten Club released a special box set edition of all of Pearl Jam’s studio albums in 2017. The release only has 500 copies and even has a certificate of authenticity which also indicates the number of the copy you have.

The set is the first box set that had vinyl record pressings done for it. The box set is a vinyl storage box with ten single vinyl jackets printed with the album covers of the studio albums and holds 12 inch vinyl records each.

#6 SUCH PRETTY IN THE ROAD – ALANIS NADINE MORISSETE Alanis Nadine Morissette is a GRAMMY winner with a total of seven awards and has sold a total of 55 million copies of her album worldwide.

If your parents are a fan, then let me inform you that Morissette has released a collection box-set studio album in 2020 entitled Such Pretty Forks in the Road. The box set has a CD duplication of her 2020 album along with 100x150mm cards and stickers.

#7 LIVE IN THE TRAGIC KINGDOM – NO DOUBT 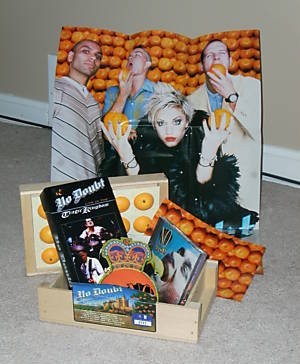 No Doubt is a rock band that released a compilation album box set in 1997 entitled Collector’s Orange Crate. There are only 8000 crates released and only 2 of them are available for buying.

The album package is a wooden crate with a lid with plastic attachment at the top that is printed with 15 oranges arranged in a line.

The lid has two custom labels on each side of it and the inside another set of oranges are printed on a paper sheet. Under the paper is the sticker and poster, the uncensored home video of Live in the Tragic Kingdom, as well as the 1995 reissue of The Beacon Street Collection CD. 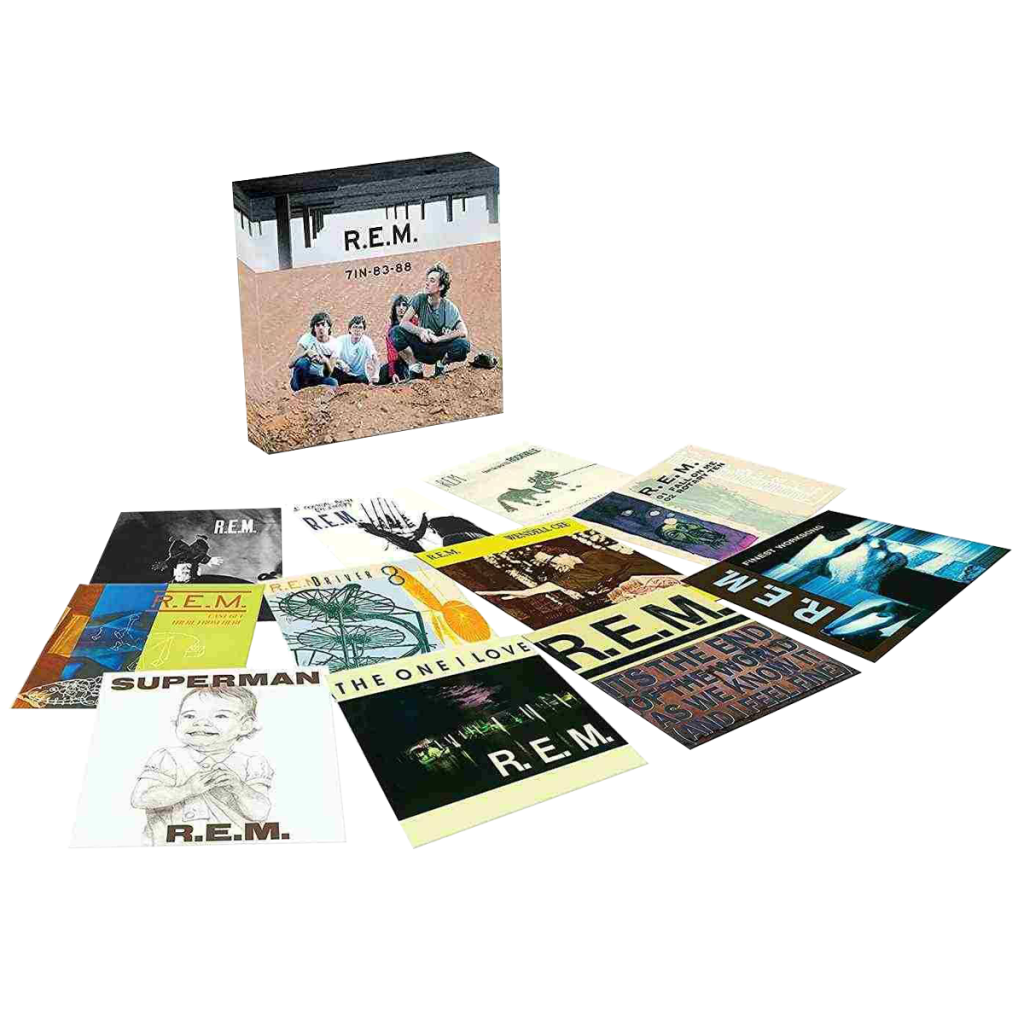 I.R.S. Records released the most recent compilation album of American rock band R.E.M. in 2014. The compilation album was entitled 7IN – 83-88, which stands for the size of the vinyl record the tracks are pressed on (7 inches) and the years the singles are from (1983 to 1988).

The album is a collection of eleven 7 inch vinyl record singles with additional 13 b-sides. The eleven singles are Radio Free Europe, So. Central Rain (I’m Sorry), (Don’t Go Back To) Rockville, Can’t Get There From Here, Driver 8, Wendell Gee, Fall On Me, Superman, The One I Love, It’s the End of the World as We know It (And I Feel Fine), Finest Worksong.

These 11 vinyl records are protected by jackets that are printed with different artworks and the name of the single and the band. And these jackets are slid inside their box container with a lid on top. 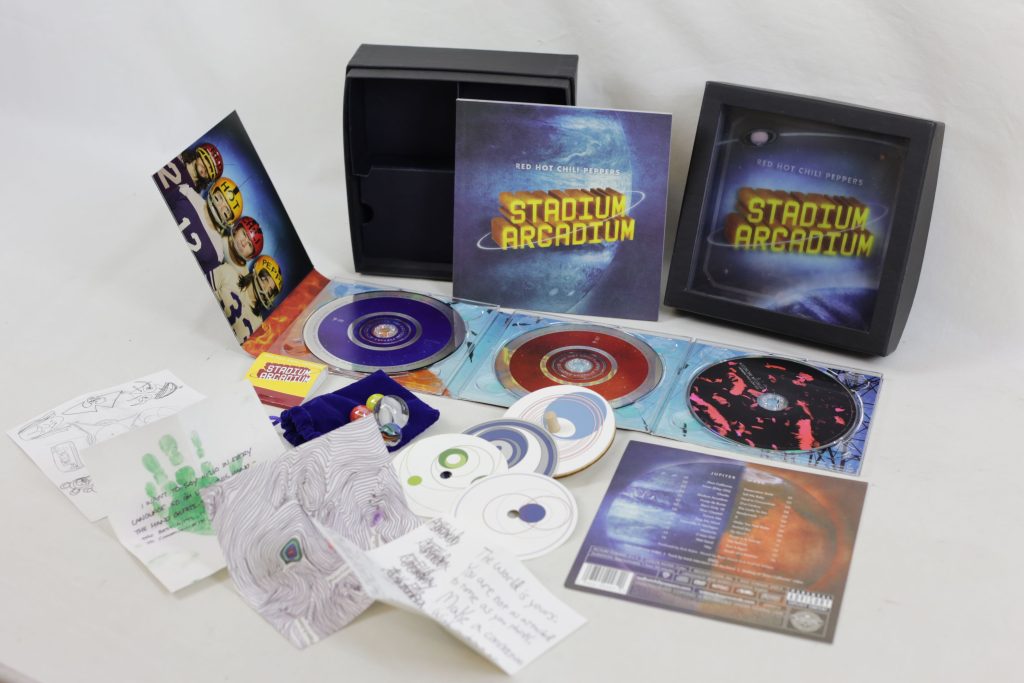 The limited special edition includes 2 CDs with 28 songs stored in them, a DVD with “Dani California” music video, behind-the-scenes, making of the video, and a one hour interview with the band. It also includes a 28-page booklet, original artwork made by the band, as well as special spage-ager discoveries. All of this is stored in a black box and black lid with clear plastic at the top. 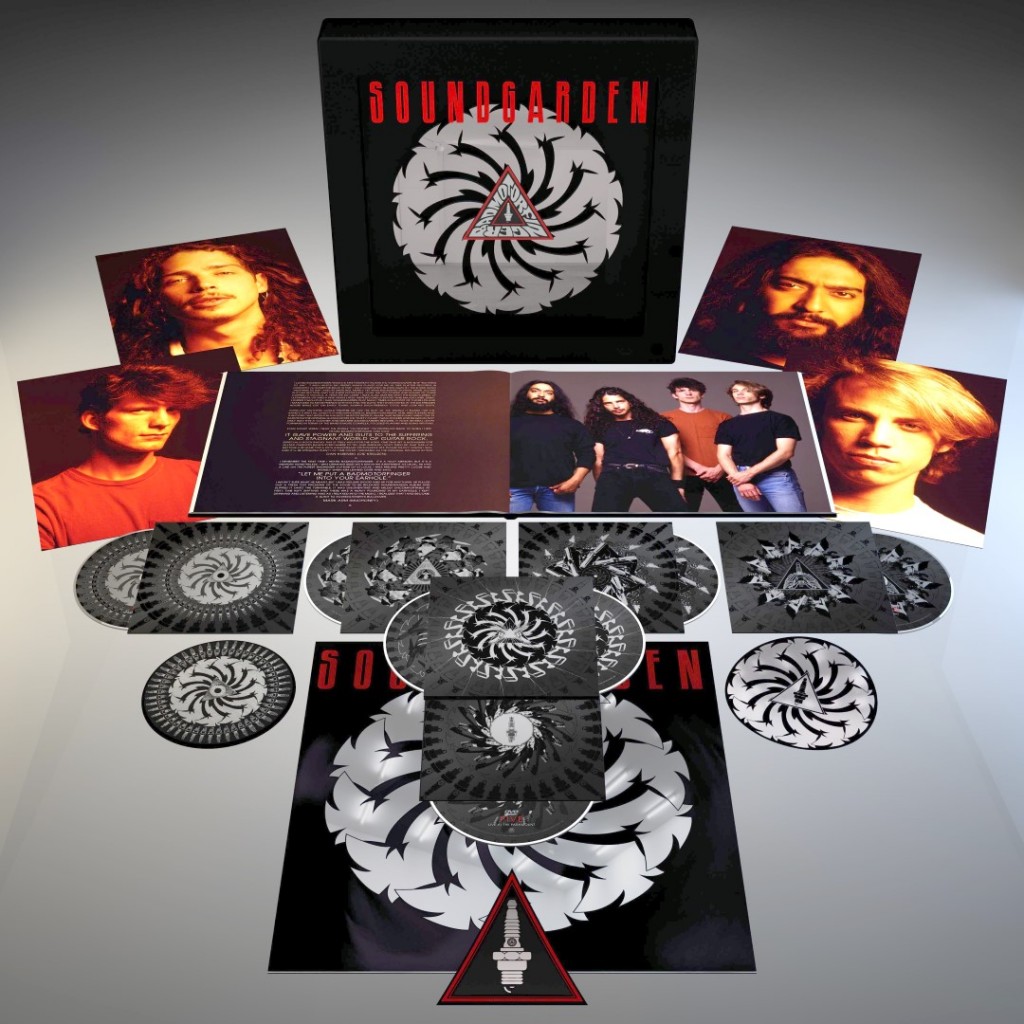 Badmotorfinger is Soundgarden’s third studio album and it was nominated for a GRAMMY award  in 1992 for “Best Metal Performance”. It has also been certified double platinum, selling more than 1.5 million copies in the US alone.

To celebrate the Badmotorfinger’s 25th Anniversary since its release in 1991, the band released its 4 new special editions last November 18, 2016. The super deluxe limited edition of the album is the most expensive and the most jam-packed.

It includes the album’s remastered version, the Paramount Theater show they did on March 6, 1992 in CD and DVD, unreleased tracks and outtakes, lenticular lithograph, band photo prints, patch. These are all stored inside a very collectible icon box printed with a reimagined design of the original album cover of the album. 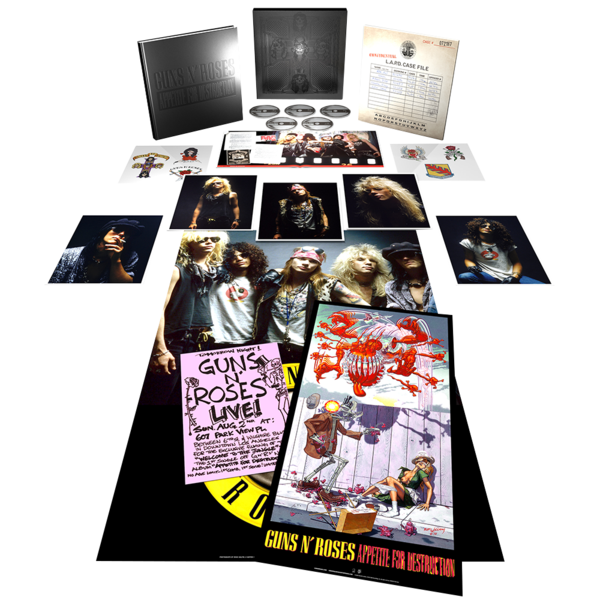 The Super Deluxe Edition features 4 CD discs, the first one containing the original Appetite for Destruction album and the other three containing B-sides, EP’s, and the 1986 Sound City Session. There is also a fifth disc, a Blu-ray audio disc, that contains the remastered album, bonus tracks, music videos, and an unreleased video of “It’s So Easy”.

The edition also includes collectibles like the band members lithographs, a replica of their concert tickets, a wall poster, as well as temporary band member tattoos.

It also contains a hardcover book with never-before-seen photos from Axl’s Personal Archive and a Bombardment of Memorabilia printed on its 96 pages. There is also a simulated-leather wrapped slipcase and book cover with an embossed logo of the band. 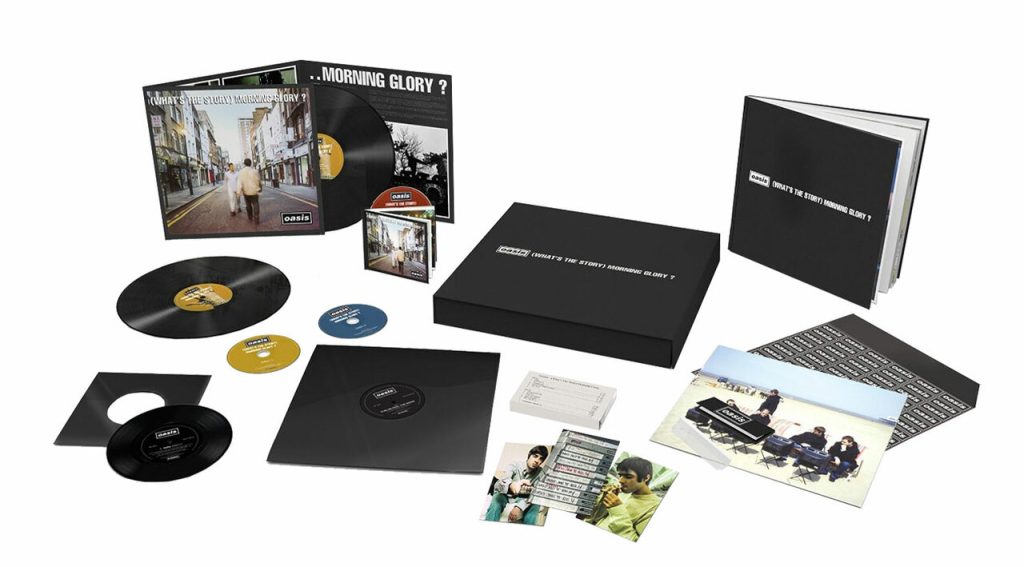 (What’s the Story) Morning Glory? is the Oasis’ second studio album released in October 1995. It includes popular singles like Some Might Say and Wonderwall. The box set has an extensive list of items within it. It apparently has 3 popular audio formats included in it.

The first audio format is the CD. It has 3 CD discs that hold a total of 41 tracks. The second one is the vinyl format. There are two 12-inch vinyl records that are pressed with the 13 tracks of the remastered (What’s the Story) Morning Glory? Album.

There’s also the 7-inch vinyl record with the Hello demo and a replica 12 inch vinyl promo. The last one is the cassette tape where the set has a promo cassette replica.

The set also includes a hardback coffee table book with 56 pages, art print, rolling papers and a postcard set which are all stored in a deluxe box with magnetic closure lid. 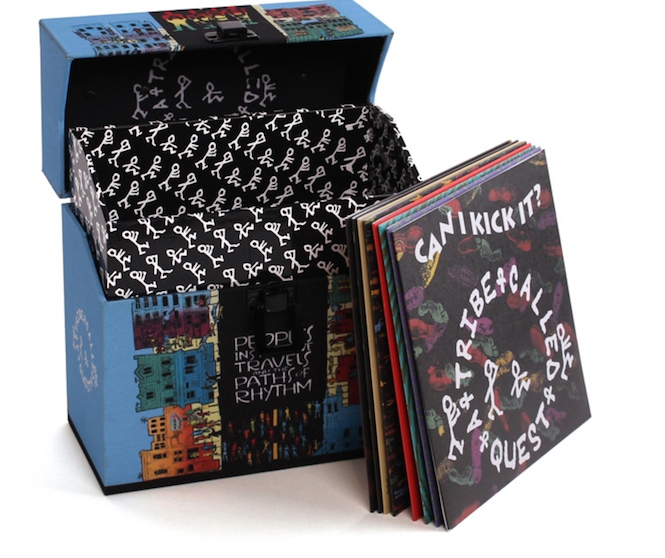 A Tribe Called Quest is an American hip hop group and People’s Instinctive Travels and the Paths of Rhythm is their debut album.

The studio album had a vinyl pressing for its box set on eight 7 inch vinyl records that run on 45 rpm. The tracks of the debut album were resequenced to fit the format.

The box set also includes songs from CD and cassette tape duplications of the album as well as the rare bonus track If The Papes Come which is the b-side for the single Can I Kick It?. The eight 7-inch vinyl records are housed inside printed jackets which are in turn put inside a blue box. 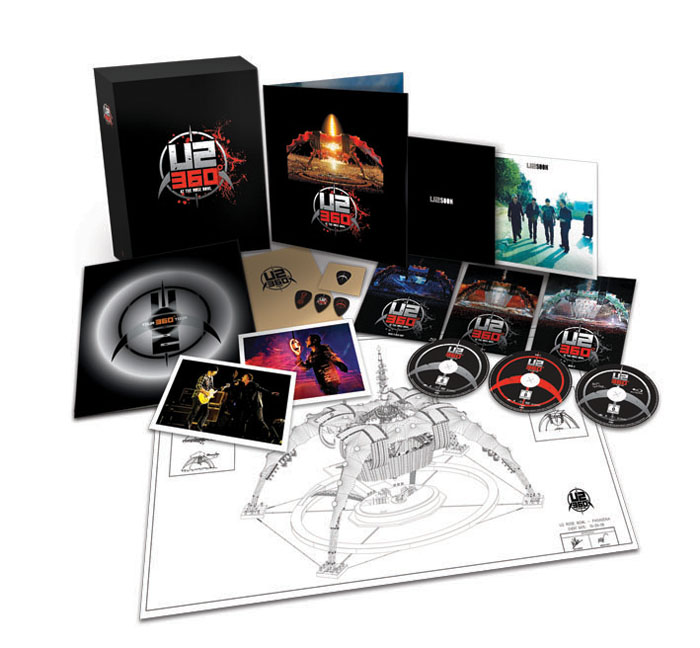 The film’s box set was released mid 2010 and had numerous inclusions. It included a hardback book with 32 pages,  two limited edition DVD discs and one Blu-ray disc of U2360° At The Rose Bowl with additional 2 hours of bonus material.

There is also one 7 inch vinyl record, three U2360° guitar picks, the Tour Programme and a limited edition numbered drawing of final stage design, and five art prints in an embossed wallet.

#15 A CABINET OF CURIOSITIES – JANE’S ADDICTION 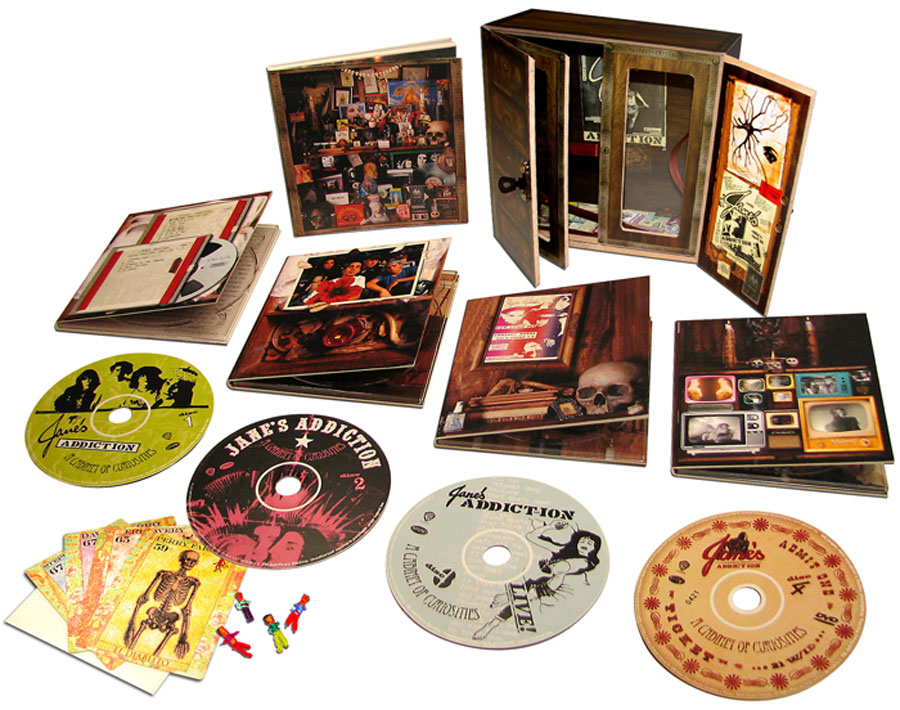 Rhino Records had released a box set of Jane’s Addiction’s a Cabinet of Curiosities in April 2009. There are 3 CDS that contain tracks, demo tracks, rehearsal outtakes, remixes, and live performances.

It also has a DVD disc that contains the Soul Kiss video as well as most of the band’s music videos. Other inclusions of the set are tarot cards and miniature voodoo dolls which are all placed inside a box with cabinet doors as the lid.

Choose a reference. Find a major label track with the tonal balance you’re looking for – ideally something that hasn’t been totally decimated in mastering, since you’ll be comparing it to your unmastered tracks. If you followed my earlier advice on using a reference during the mixing process, you’ll want to use the same track here. […]

You must have realized by now that as an indie musician, you practically have to do everything on your own-including publicity. You barely have time to practice your music and ha! You still have to contact that editor, that music blogger, that radio guy just for 2 minutes of fame. Do not complain, now. Yes, […]