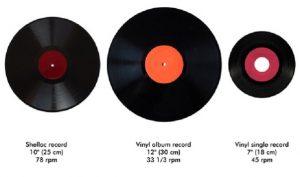 Now that vinyl records have officially made their presence felt again (vinyl surpassed CD sales this year), it’s about time we pay attention to the format again and look back on how the custom 12 inch vinyl record format came to be. But before we go straight to the 12-incher, let’s just go a little bit before that.

Let’s take a trip back all the way to 1948 and get to know the phonograph. Before we had the standard 12-inch vinyl LP record format that plays in 33½ rpm (revolution per minute), we first had the phonograph record or the 78rpm record. 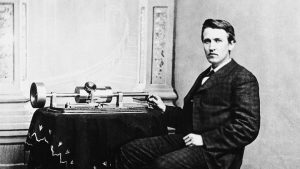 At that time wax cylinders gave a better quality of sound compared to the phonograph records, and this was due to the varying speed of the gramophone which was 70 rpm to 80 rpm. This was eventually resolved by Elridge R. Johnson, who was Berliner’s manufacturing associate. He settled with 78 rpm which gave an optimum sound quality.

The earliest phonograph records in the 1889-1894 were made of various materials including rubber. In 1995 a shellac-based material, where the mixture differed depending on the manufacturer, was introduced. This became the standard material for about 55 years until in the 1960’s when vinyl (a less noisier material than shellac) was introduced.

The first album released for this audio format was made by the German record company Odeon in 1909 with Tchaikovsky’s Nutcracker Suite put on 4 double-sided records. Most music recorded into these 12-inch records were classical music and operatic selections. There were also medleys that spotlighted Broadway show scores released by Victor Talking Machine Company, Columbia Records, Brunswick Records.

After these phonograph records, the LP (long playing) records came. 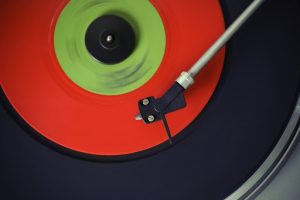 This format was introduced in 1948 by Columbia and soon replaced the phonograph records. It was experimented in 1941, led by CBS Laboratories head research scientist Peter Goldmark, but was halted due to World War II. It resumed in 1945 and was introduced to the world in 1948 with 2 formats: 10-inch and 12-inch records.

LP records were named as such due to the fact that they do play longer, much longer, than the phonograph records. While 12-inch phonograph records can play for 4-5 minutes per side, 12-inch vinyl records can play for 23 minutes max per side. This audio format was very much accepted by the people due to its long play time which allows the continuous recording and playing of lengthy classical music. I mean…who doesn’t want more, right?! 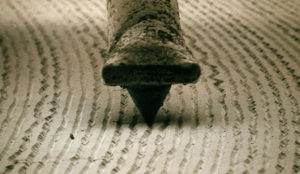 The twelve-inch SINGLE was originally from the 7-inch 45 rpm single which was released by RCA Victor in 1949. Generally cut at 45 RPM, they feature wider groove spacing and shorter playing time compared to LPs. This makes for a more dynamic sound, with louder volume, and with less chance of being warpy. Basically, a 12-inch vinyl single has more superior sound compared to the 12 inch vinyl LP which is more compact.

It was used mainly by DJ’s in discos as it can be played longer than 7-inch 45 rpm records and better quality. In addition, there is also a wider gap between grooves which is very advantageous to DJ’s as there will be lesser cross-talk.

In present, the widely used and bought format among the three is the 12 inch vinyl record (LP) format. This may be due to the fact that they can store more songs in one record compared to the two.

That’s the quick history of the 12 inch vinyl record, folks.

Imagine if vinyl records were not invented and music was not consumed in a way that gives freedom to the consumer, I wonder how it affects music at that time until today. Hail to the vinyl for making music accessible to every household.

7 Creative (and one icky!) Vinyl Records

Here are some of the most creative and unusual vinyl records ever released in the 21st century. We therefore conclude that there is absolutely no limit when it comes to designing vinyl records. GLITTER VINYL RECORD The 7″ EP from Dads, titled Pretty Good, had a limited pressing of 100 copies on clear vinyl with rainbow […]

We’ve featured plenty of creative vinyl packaging over the years and this CD/Vinyl packaging definitely has one of the sleekest designs . Here is the 10-inch casebound hard cover gatefold double vinyl edition of Satellites‘ album entitled 01. It contains two die-cut silver sleeves that looks like real giant metal diskette from afar. Each sleeve […]