Original movie soundtracks on vinyl records have become HOT right now and sci-fi movies cannot afford to be left behind.

If you’re a vinyl and sci-fi fan, then you’re in luck because OSTs from popular sci-fi movies are now available on vinyl record.

Here are 20 OST vinyl albums with awesome designs and artwork on its jackets, records, and sleeves. 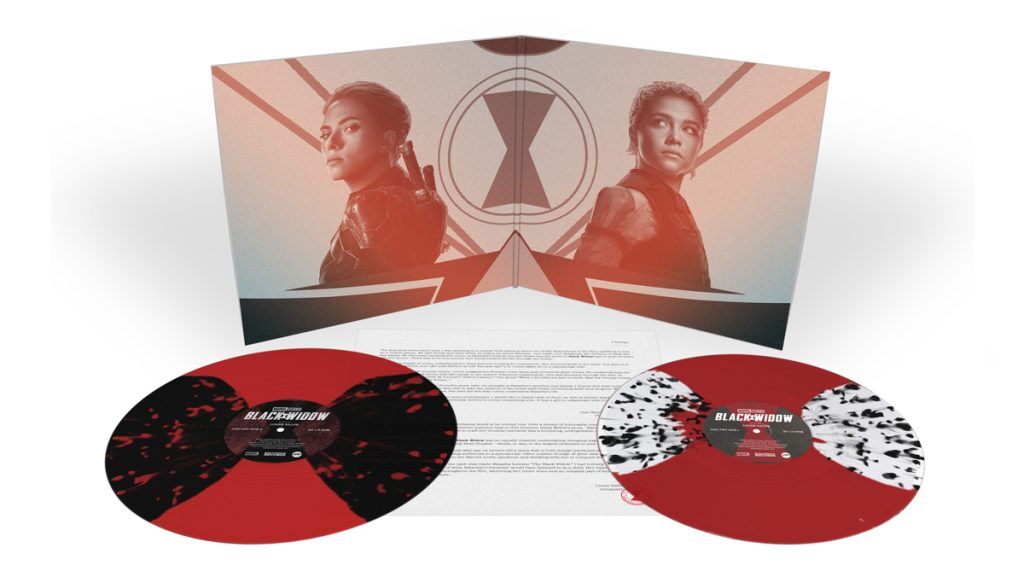 The Black Widow is the first movie in Marvel Cinematic Universe’ Phase Four.

It is the story of Natasha Romanoff, a Russian-spy who was trained to be a Black Widow at a young age, and her adventures after the events of Captain America: Civil War.

It also introduces her fellow Black Widow trainees and other people from her past.

The OST scored by Lorne Balfe for the movie was released on vinyl records. The album includes a gatefold jacket and two 180 gram multi-colored vinyl records.

The butterfly splatter design we have here is an exclusive copy shopped at Mondo Record Shop.

#2. MARVEL’S ANT-MAN AND THE WASP VINYL 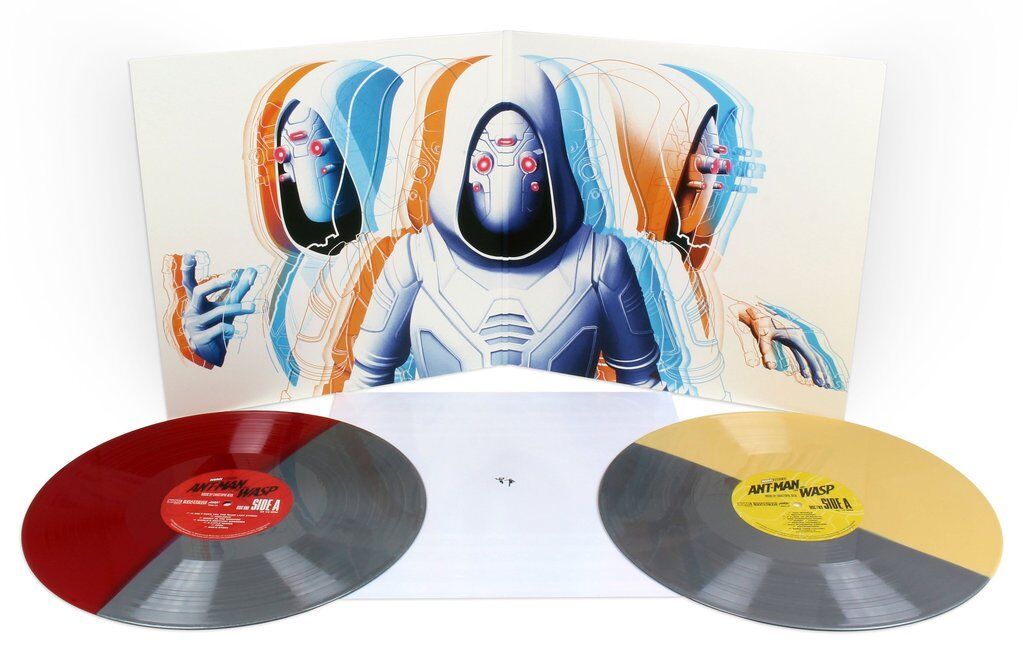 Ant-Man and the Wasp is the sequel of Marvel Studios’ 2015 film, Ant-Man.

It revolves around Scott Lang, the Ant-man, and Hope Pym, the Wasp, and their journey through the quantum realm as they try to save Hope’s mother.

The soundtrack for this film was scored by award-winning composer Christope Beck.

#3. DAWN OF THE PLANET OF THE APES MOVIE VINYL 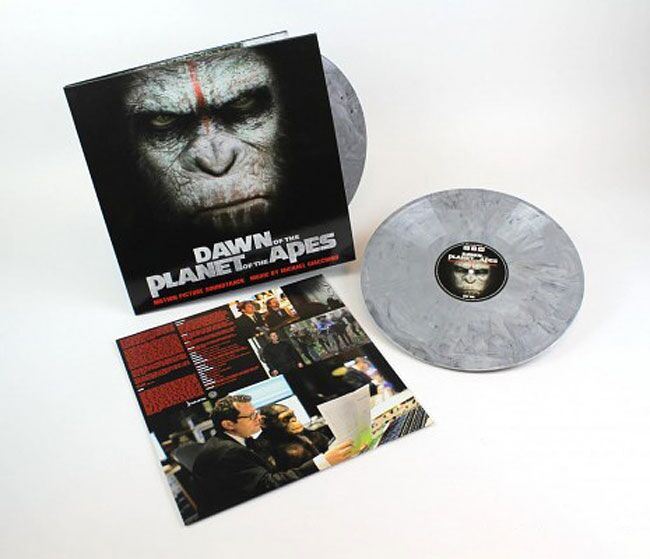 It revolves around a small group of human survivors in San Francisco as they struggle for survival, while Caesar tries to maintain his dominance over his group of intelligent apes.

The latest pressing, however, is on grey vinyl records with swirling designs housed by black inner sleeves. 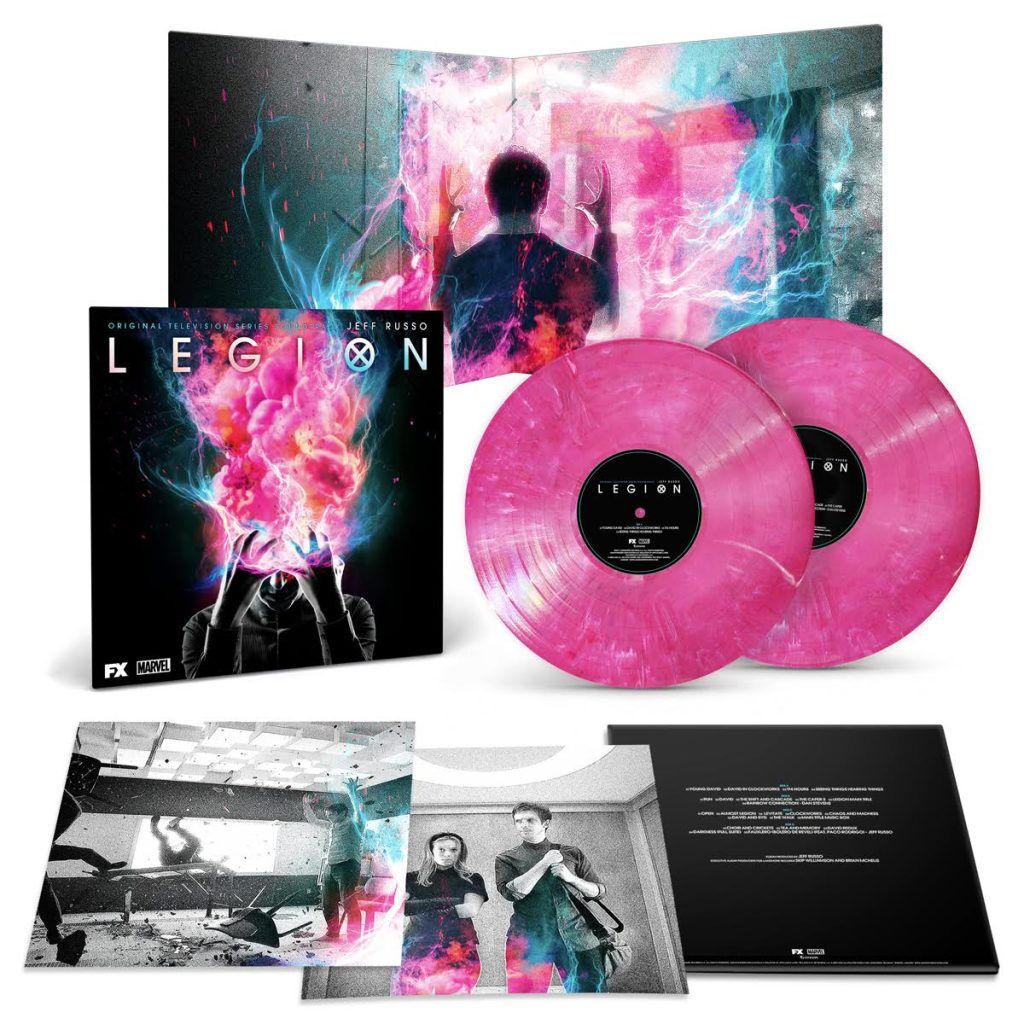 Legion is an original television series by FX which was based on the Marvel Comics’ character, David Haller or Legion.

Season one of the series revolves around Dan Stevens’ character David Haller, a schizophrenia patient, and his efforts in trying to control his mutant powers.

The perfectly fit original soundtrack of the series’ season one was released on a deluxe vinyl package.

It has tracks of both volumes on marble pink vinyl records that look like they have brain synapses on them.

The beautiful artwork as seen above for the gatefold jacket and sleeves leaves us feeling Legion’s magical powers. 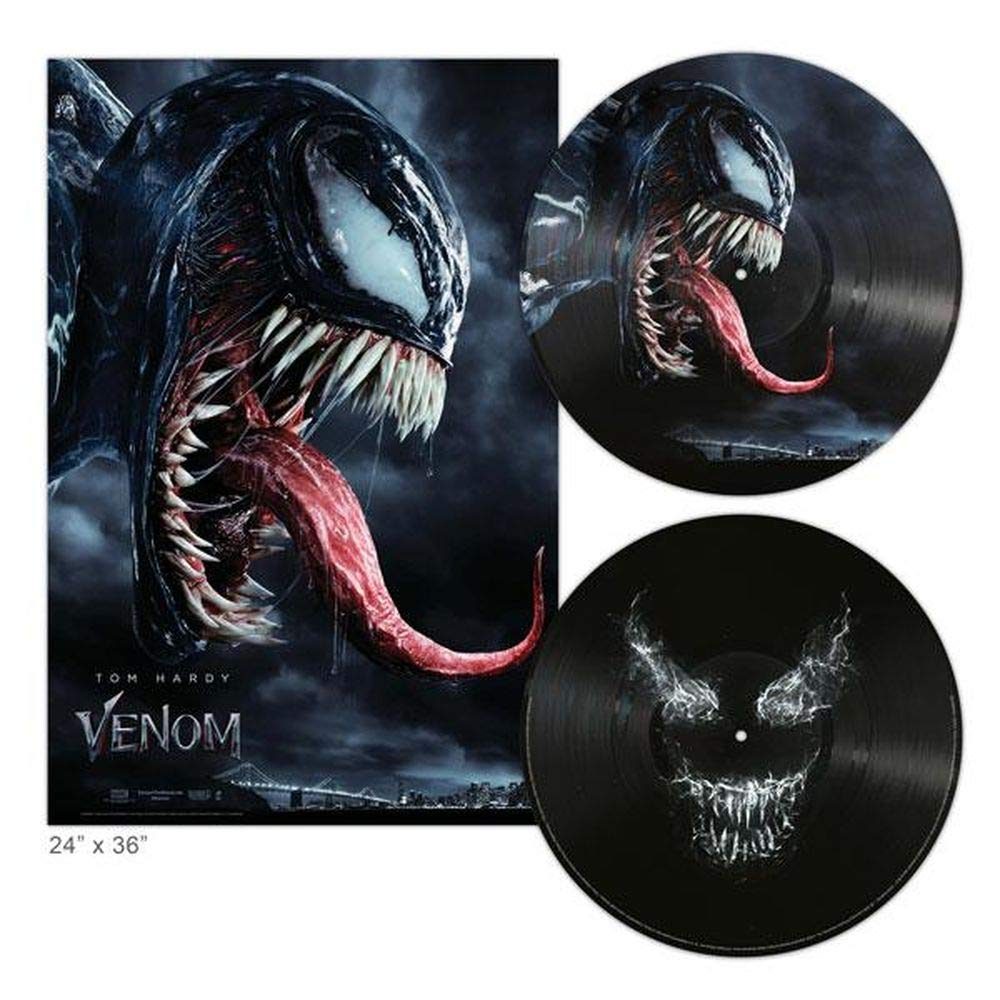 Venom is the origin story of the villain “Venom” of the Marvel Comics.

It introduces the symbiote “Venom”, who needs a host in order to survive, and his change of heart from bringing in fellow symbiotes to take over the earth.

The film’s sequel, “Venom: Let There Be Carnage”, was released this October 2021.

The score for this film was composed by Ludwig Goransson and was pressed on exclusive horrifically looking picture disc vinyl.

The soundtrack vinyl album includes one picture disc vinyl, one poster, and one clear plastic gatefold.

The clear plastic giving room to display the design and artwork on the picture disc on one side and poster on the other.

Check out our custom poster printing. 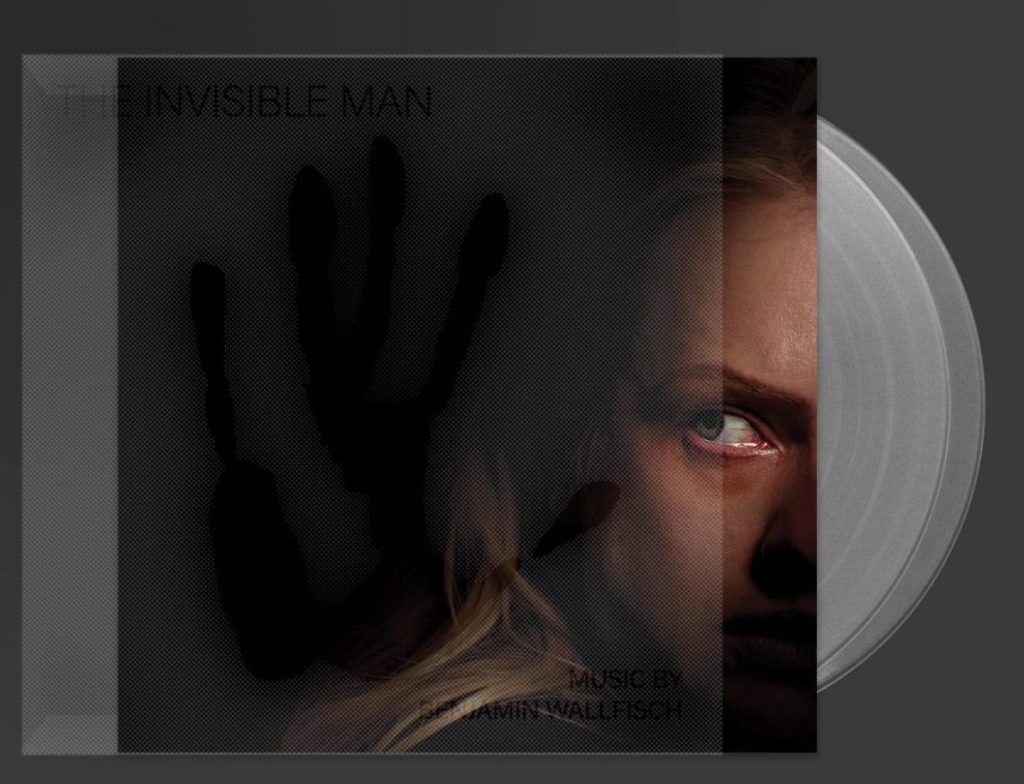 The Invisible Man is a sci-fi horror film based on a novel of the same name by H. G. Wells.

The story revolves around a woman, portrayed by Elisabeth Moss, and her struggle to escape the invisible man.

The movie’s original soundtrack was scored by Benjamin Wallfisch and pressed on two 180 gram clear vinyl records with an etching on side D of the album.

The records are contained in a gatefold sleeve which is in turn encased by a see-through slipcase. 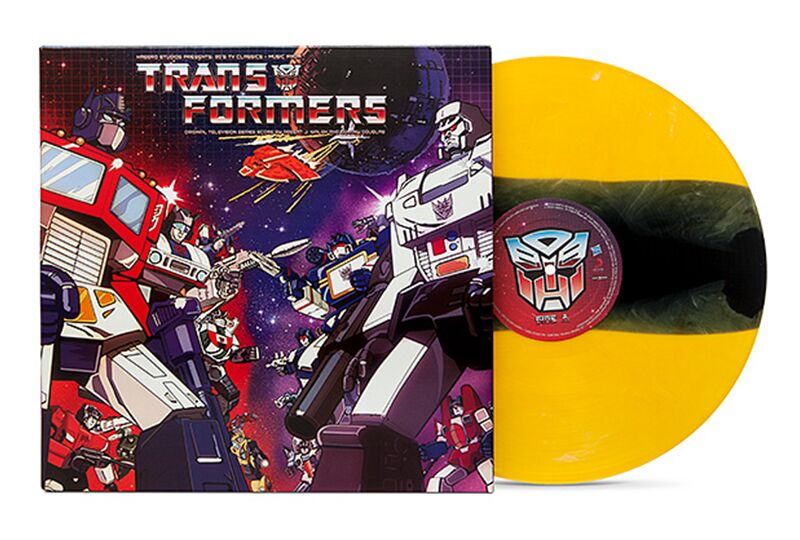 The movie revolves around Bumblebee and his efforts of saving the world from the Decpeticons.

The sci-fi action movie has its soundtrack pressed on a black and yellow striped vinyl record which symbolizes bumblebee’s yellow and black colors. 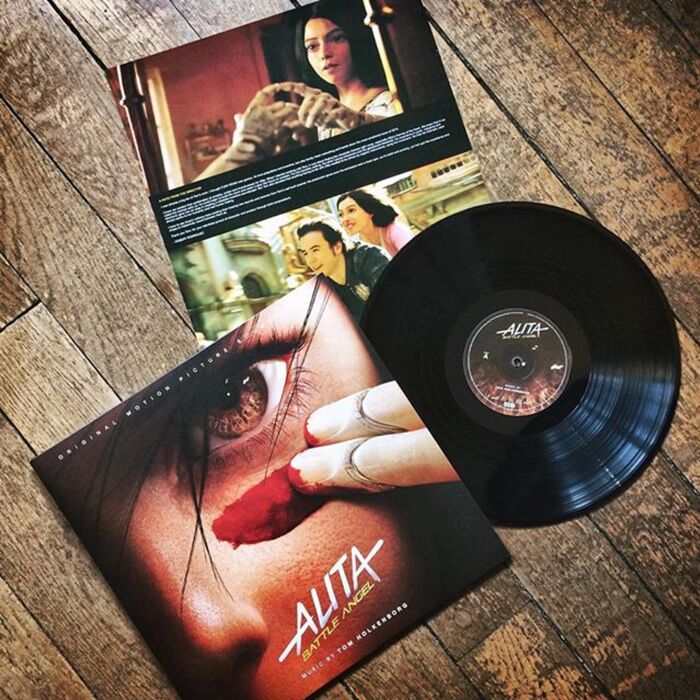 Alita: Battle Angel is an action film based on a famous manga by Yukito Kishiro.

The film revolves around Alita, a cyborg with no memories, and her adventure of fighting off evil forces as she uncovers the truth of her origin.

Though the soundtracks of the movie are just pressed on a standard black vinyl record, we cannot deny that it looks awesome with it’s eye design in the center.

The front cover of the jacket is an artwork worthy of praise too as it showcases the cyborg’s big eyes, something which is of a debate between groups of people who criticize and love it. 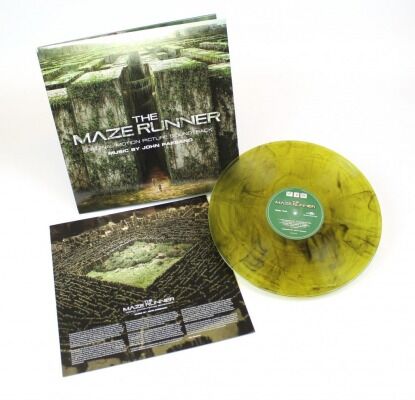 The Maze Runner is a film based on James Dashner’s novel of the same name.

It is a dystopian sci-fi film that stars Dylan O’Brien and Kaya Scodelario who portrays Thomas and Teresa as they try and survive the deadly maze they were put into along with other male gladers.

The soundtrack for this thrilling film was pressed on single 12 inch vinyl in transparent green with wisps of color black on the surface.

It is housed in a gatefold jacket with an eerie photograph of the entrance to the maze. It is packaged in a resealable collector’s bag. 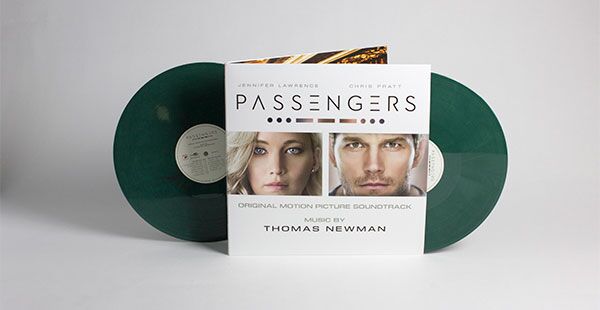 Passengers is a 2016 film starring Jennifer Lawrence and Chris Pratt who portrays two passengers of the sleeper ship, Avalon, that woke up 90 years too early from their induced hibernation.

The 2016 film had its soundtrack pressed on limited edition moss green vinyl records.

Thomas Newman, an award-winning composer, scored the movie’s OST and did so with the idea of giving the impression of “an endless dream and endless journey”, much like the situation of the two protagonists. 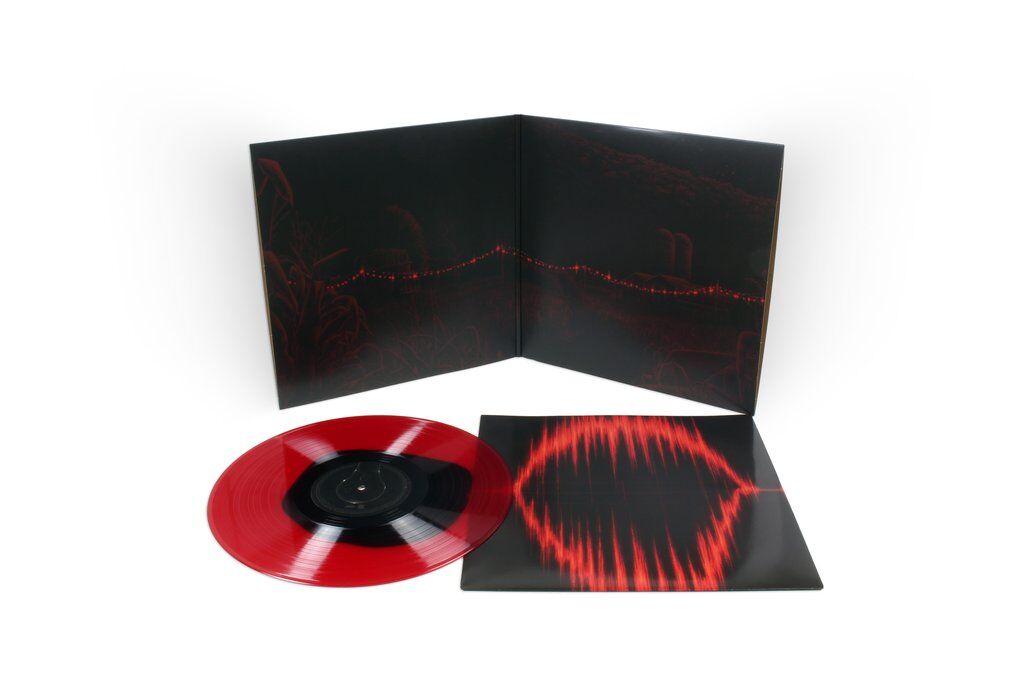 A Quiet Place is a horror film revolving around a four-membered family as they try to survive the post apocalyptic world filled with blind monsters with an acute sense of hearing.

The score for this eerily silent movie was composed by Marco Berami and the artwork for this equally eerie vinyl album was created by Mat Ryann Tobin.

It was pressed on 180 gram black and red color-in-color vinyl with a gatefold jacket and inner sleeve also designed in red and black.

ALIEN: Covenant on vinyl! The soundtrack is masterful, an instant classic. 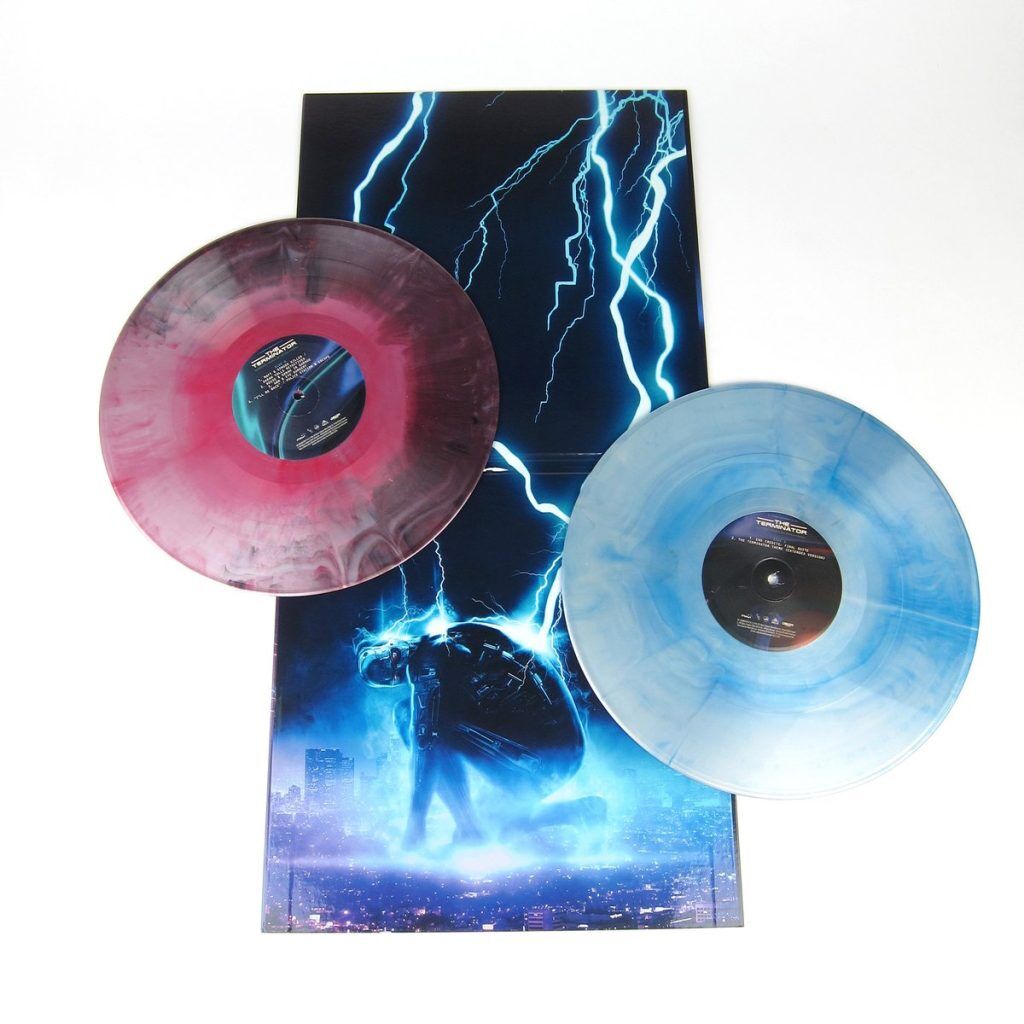 The original Terminator soundtrack returns on gorgeous double 180 gram vinyl thanks to the good folks at Mondo.

Brad Fiedel recorded the score back in 1984 and set the dark, dystopian tone for the world of Sarah Connor and Skynet through ominous synths and tense atmospherics.

This 2016 expanded reissue features fully remastered sound from the original tapes and is sequenced in the order Fiedel originally intended (without all the rock track fillers from the 1984 Enigma pressing). 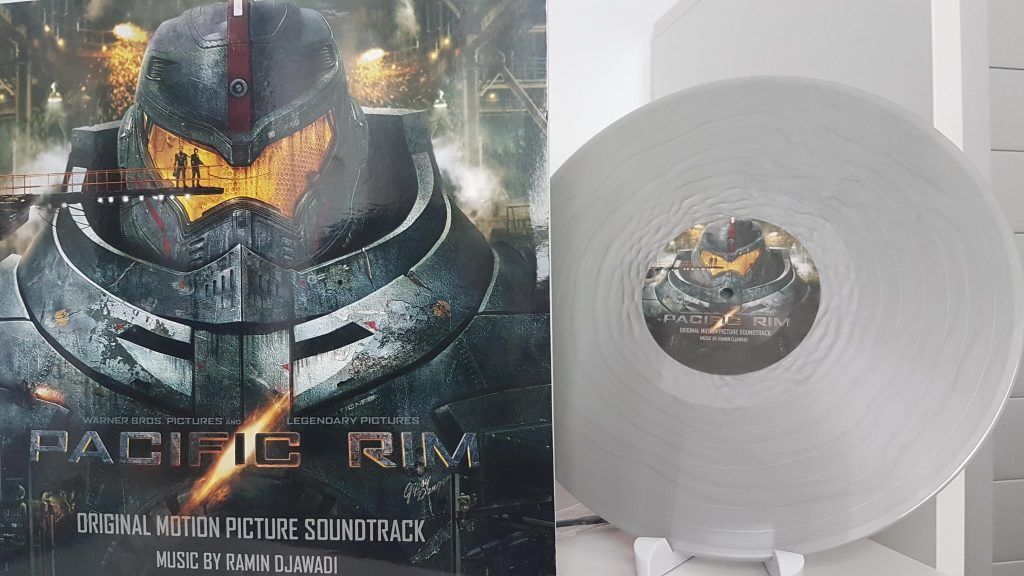 The film’s score was composed by Ramin Djawadi, with guest musicians Tom Morello (Rage Against The Machine, Audioslave) and Priscilla Ahn.

Ramin Djawadi is best known for his scores for the movies Warcraft [MOVATM118], Iron Man, Prison Break and for HBO’s hit series Game of Thrones. 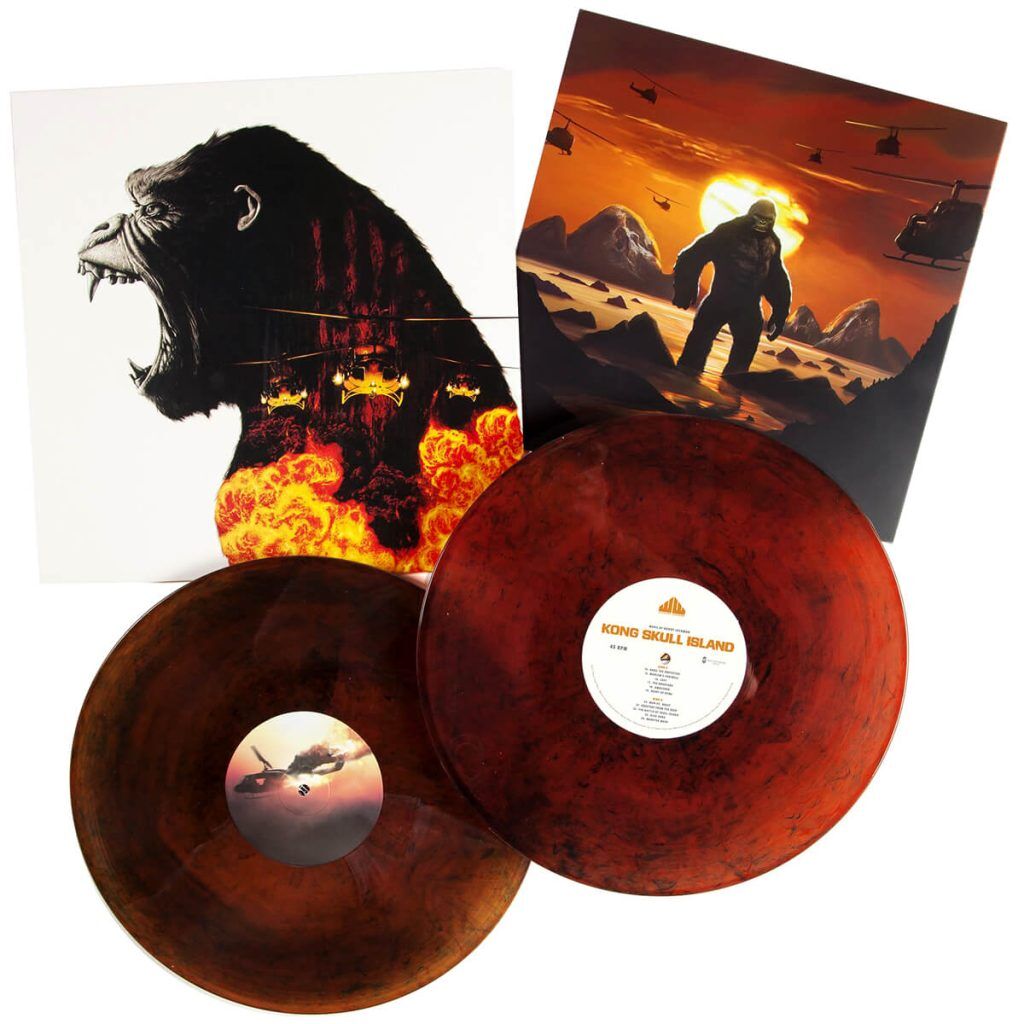 Also included are composer liner notes and a printed insert. 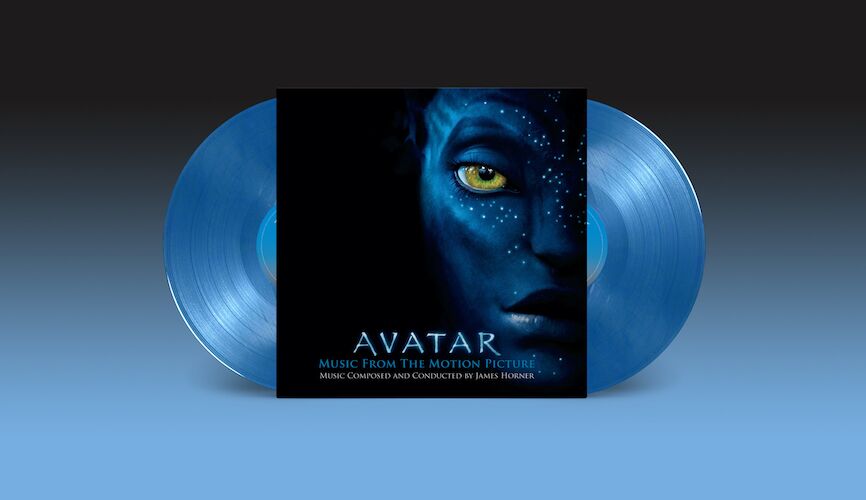 The music had to match the images with its own power to transport us to a world of powerful emotions.

It had to reach deep into our hearts, to allow us not only to see but to feel.

The music is our key to the emotional understanding of this film. Music On Vinyl’s At The Movies is very proud to present this epic soundtrack on vinyl for the first time.

This 2LP album is packaged in a beautiful full-color gatefold jacket that includes a 6 page insert.

The first 5000 copies are individually numbered and pressed on limited blue coloured vinyl. 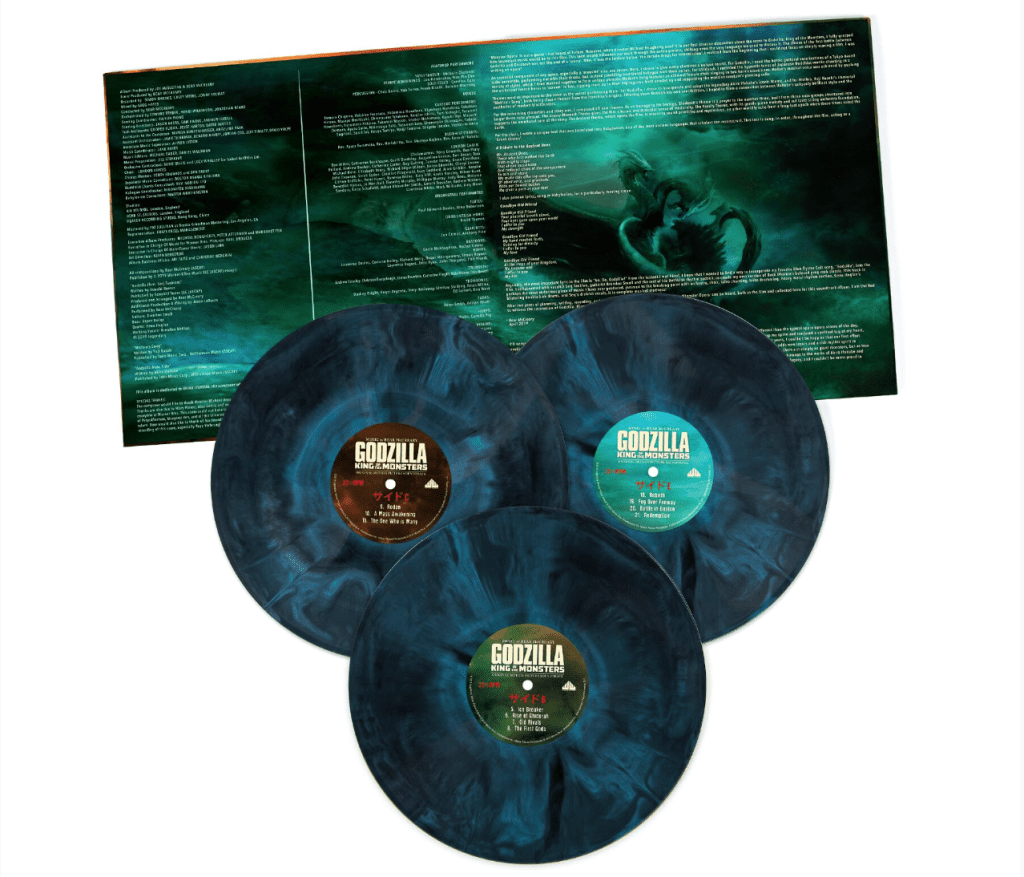 Starting today, New Orleans-based Waxwork Records is offering a turntable-smashing, 3-LP vinyl release of McCreary’s official soundtrack to Godzilla: King of the Monsters, and it’s a product your ears are not going to be able to live without.

Bergeron was intent on truly paying respect to the historic Godzilla monsterverse by creating a vinyl release fit for a king. 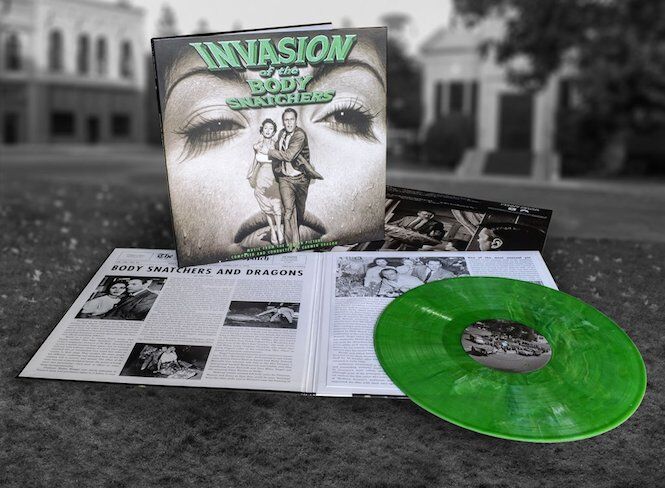 Based on the novel by Jack Finney.

The story has been remade for screen several times in 1978 starring Donald Sutherland, again in 1993 as Body Snatchers and then as The Invasion in 2007 with Nicole Kidman. 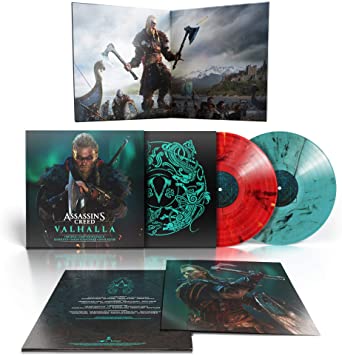 Assassin’s Creed Valhalla takes place toward the end of the ninth century, a time when Norse tribes were leaving their homes in Scandinavia and sailing to the collection of fractured kingdoms known as Anglo-Saxon England.

It’s here, during this age of transition, that you’ll take on the role of Eivor and lead your people to a new land in the search for a new home.

As you embark on Valhalla’s epic Viking journey, you’ll lead deadly raiding parties, fight in massive battles, and build up a prosperous settlement, all within the historical backdrop of ninth century England. 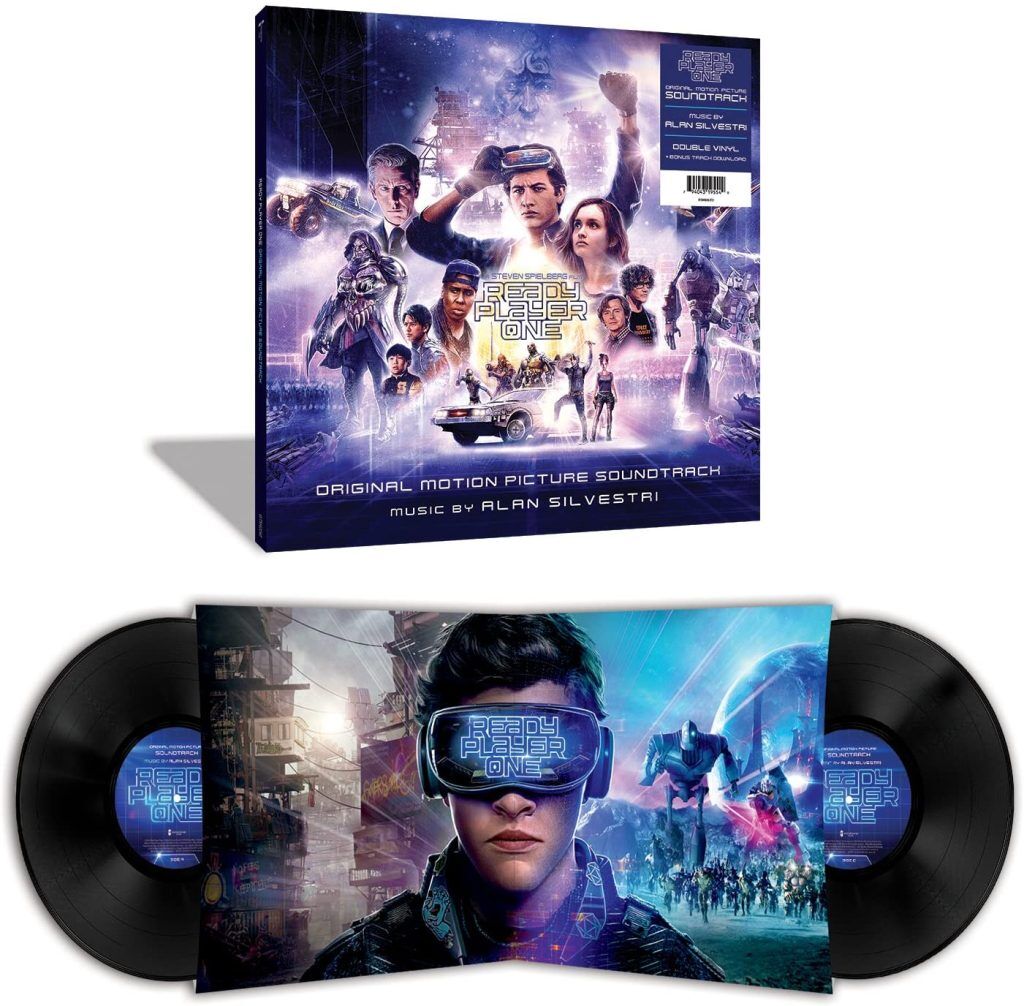 Vinyl pressing for these custom vinyl records surely are great.

They look as awesome as the sci-fi movie they were made for.

In addition to that, they helped give color and ambiance to the soundtracks that were pressed on them.

And there you have it, folks.

Creative Agency: UVMW Illustrator: Wojtek Urbanski Creative Direction, Design: Jacek Walesiak Client: Urbanski / Uknowme Records Creative Agency UVMW was asked by Urbanski to create CD cover art  for the album “Selected Works” as well as visual setting of his concert tour. A key element of the cover art was the photograph by Michał Szlaga. One of […]

Want vinyl packaging and custom vinyl pressing inspiration? Get a load of this! This cardboard box contains a compilation of Pretty Girls Make Graves‘ first three 7″s which comprises the songs for their very first album, Good Health. This is a very special edition release because there are only 140 of these hand-numbered and silk […]