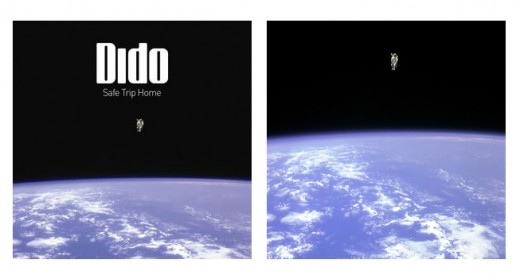 Bruce McCandless II, the first astronaut to make an untied or untethered ‘free flight’ in space, is suing Dido over the cover art for her 2008 album ‘Safe Trip Home’ for using his picture without permission.

The cover shows McCandless ‘free flying’ in space, around 320 meters away from the cargo bay of the space shuttle Challenger.

In a complaint filed on September 30 in Los Angeles‘ federal court, McCandless said that he never gave permission for Dido to use the 1984 photograph of him. Along with Dido, McCandless named Sony Music Entertainment and Getty Images Inc in the lawsuit. He is seeking unspecified damages, citing that the use of the image is an infringement of his persona.

Dido is not the only artist facing a lawsuit for using images without permission. Remember the famous Contra Polaroid cover with a woman wearing a polo shirt? Well, she also realized her rights are being violated and sued the band.

So boys and girls, what’s the moral lesson of the story?

We saw this beautiful vinyl cover at Vinyl Me Please and just had to share. This one is a split light blue and clear record with a yellow splatter, to complement the cover. The stencil says “Overgrown” with some flowers around it. The artwork on the cover is truly…a work of art, isn’t it? Beautiful colors, […]