Everyone knows vinyl records are back but why do we see so many cassette tapes lately?

We’ve had numerous orders for cassette tape duplication  last year and the orders and inquiries continue to rise this year.

Why are people still buying and listening to cassette tapes these days like it’s 1985? I mean it’s not really the most convenient music format, is it?

Out of curiosity, we went to Reddit to find out exactly why people are still loving cassette tapes today: 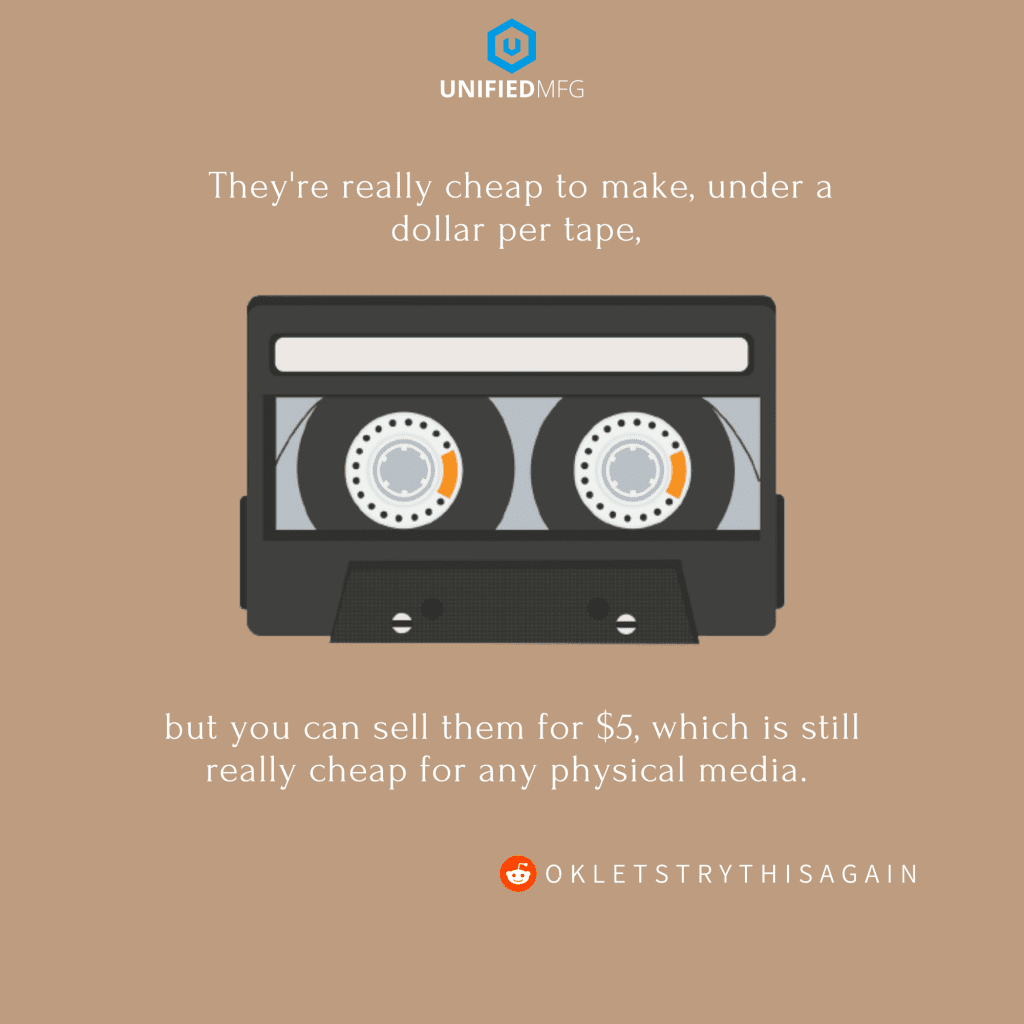 They’re really cheap to make, under a dollar per tape, but you can sell them for $5, which is still really cheap for any physical media. It’s impulse-buy territory too.

That’s a big profit margin. A band drops, and we’re talking about a really liberal high estimate on price and packaging here, 100 bucks on 100 cassettes, charge fans $5, they only have to sell 20 of those tapes to get their money back.

Where I live, if you play enough shows to warrant a tape release 20 of your friends will just buy your tape regardless.

I’d say that’s the primary reason, but we can make grabs at other reasons too. A lot more people probably still own cassette decks, in older cars or around their parents’ houses. They’re analog. In packaging they look cool too. 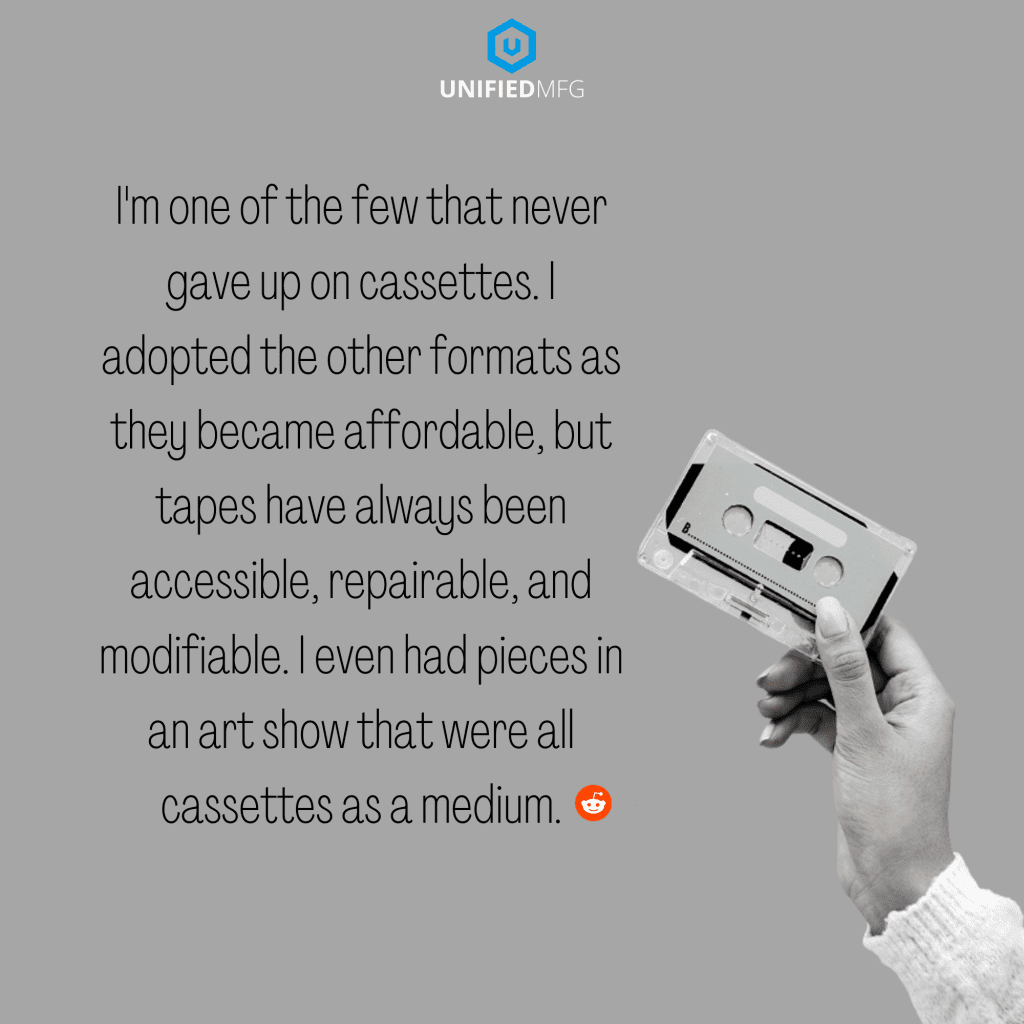 I’m one of the few that never gave up on cassettes. I adopted the other formats as they became affordable, but tapes have always been accessible, repairable, and modifiable. I even had pieces in an art show that were all cassettes as a medium. 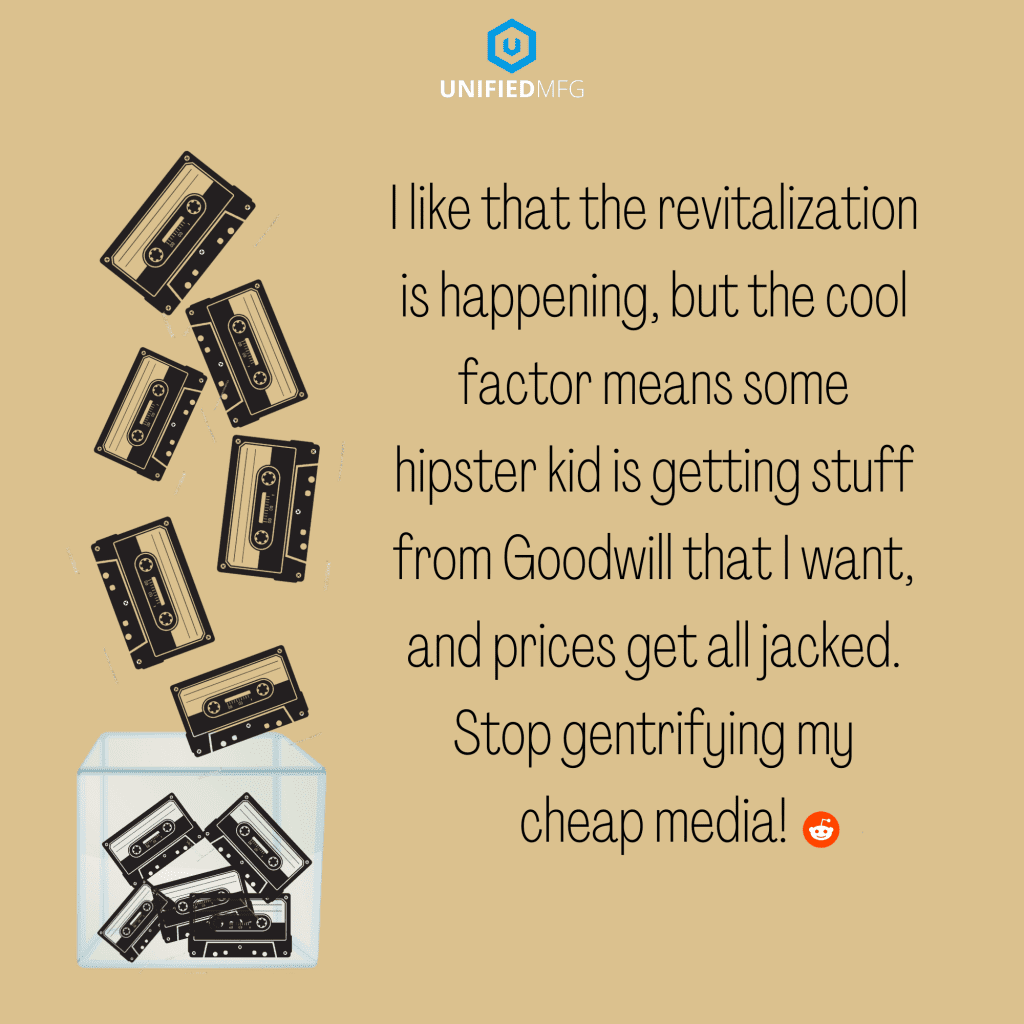 I like that the revitalization is happening, but the cool factor means some hipster kid is getting stuff from Goodwill that I want, and prices get all jacked. Stop gentrifying my cheap media! 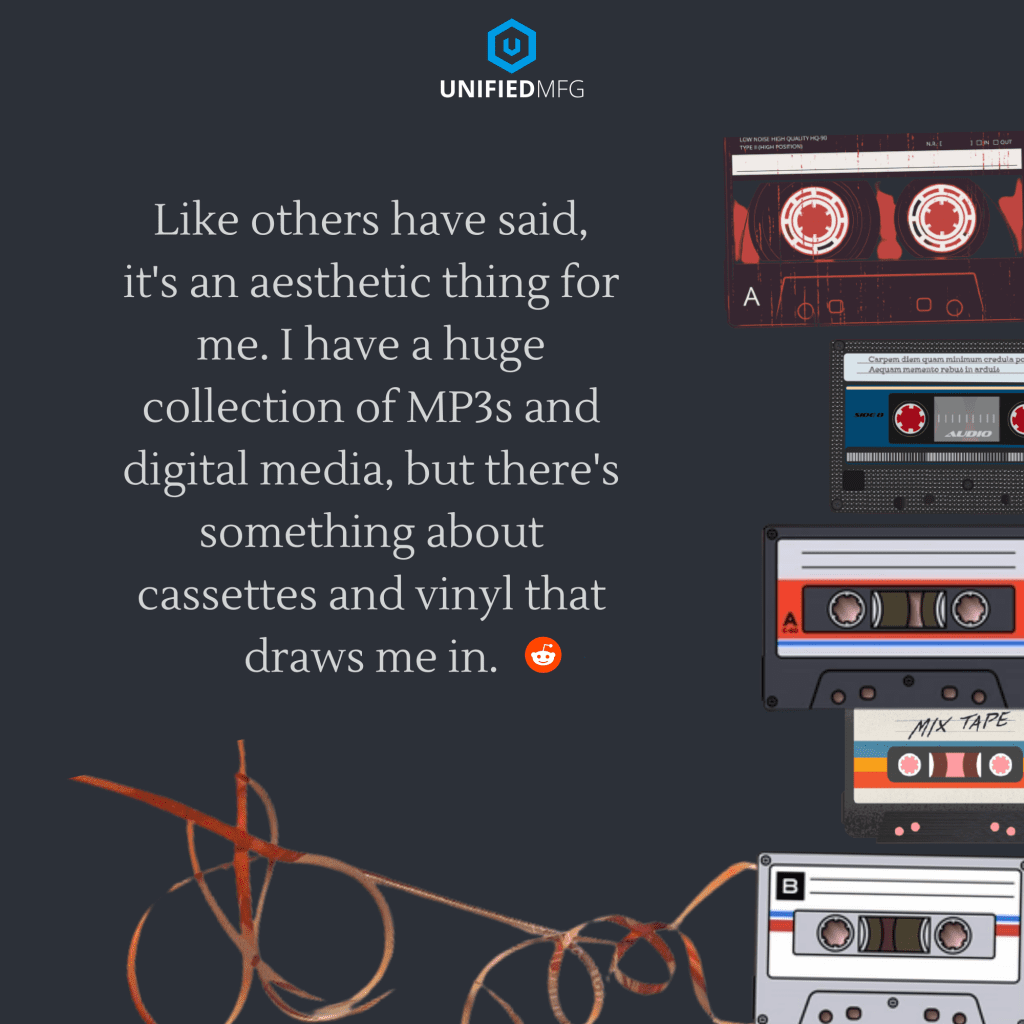 Like others have said, it’s an aesthetic thing for me. I have a huge collection of MP3s and digital media, but there’s something about cassettes and vinyl that draws me in. 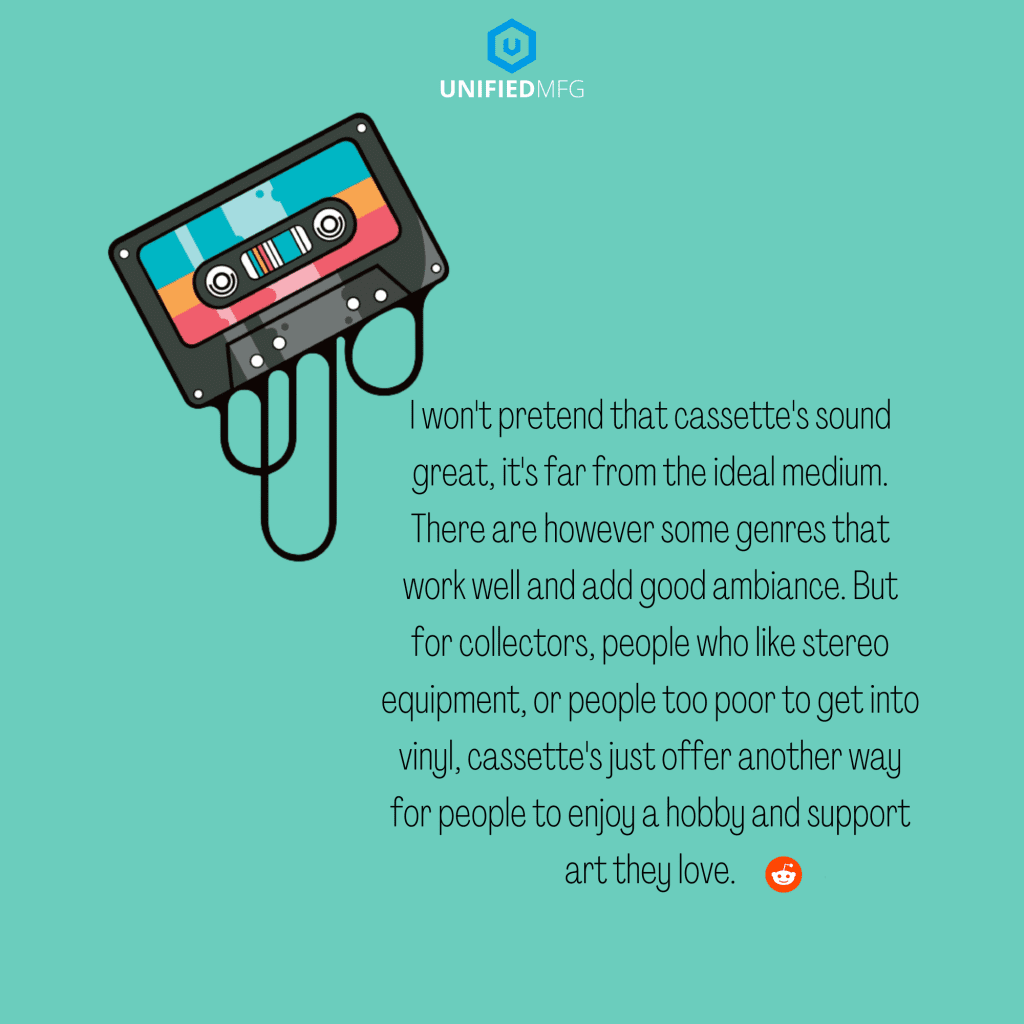 I think the reason we’re seeing cassette’s come back is a direct reaction to the spike in vinyl sales over the past 10yrs. The vinyl pressing plants cannot handle the demand, so prices have skyrocketed.

That’s why all the represses you see are $35+ and why new albums come out on streaming services months before the vinyl.

I personally just love collecting music and I found that LPs from the 90s were particularly hard to find, so I started picking up the artists I like on tape for no more than a couple bucks.

Then when the prices of records started to spike, I noticed that a lot of smaller artists were selling cassettes instead of vinyl (or while they waited months for their album to be pressed).

I won’t pretend that cassette’s sound great, it’s far from the ideal medium. There are however some genres that work well and add good ambiance. But for collectors, people who like stereo equipment, or people too poor to get into vinyl, cassette’s just offer another way for people to enjoy a hobby and support art they love. 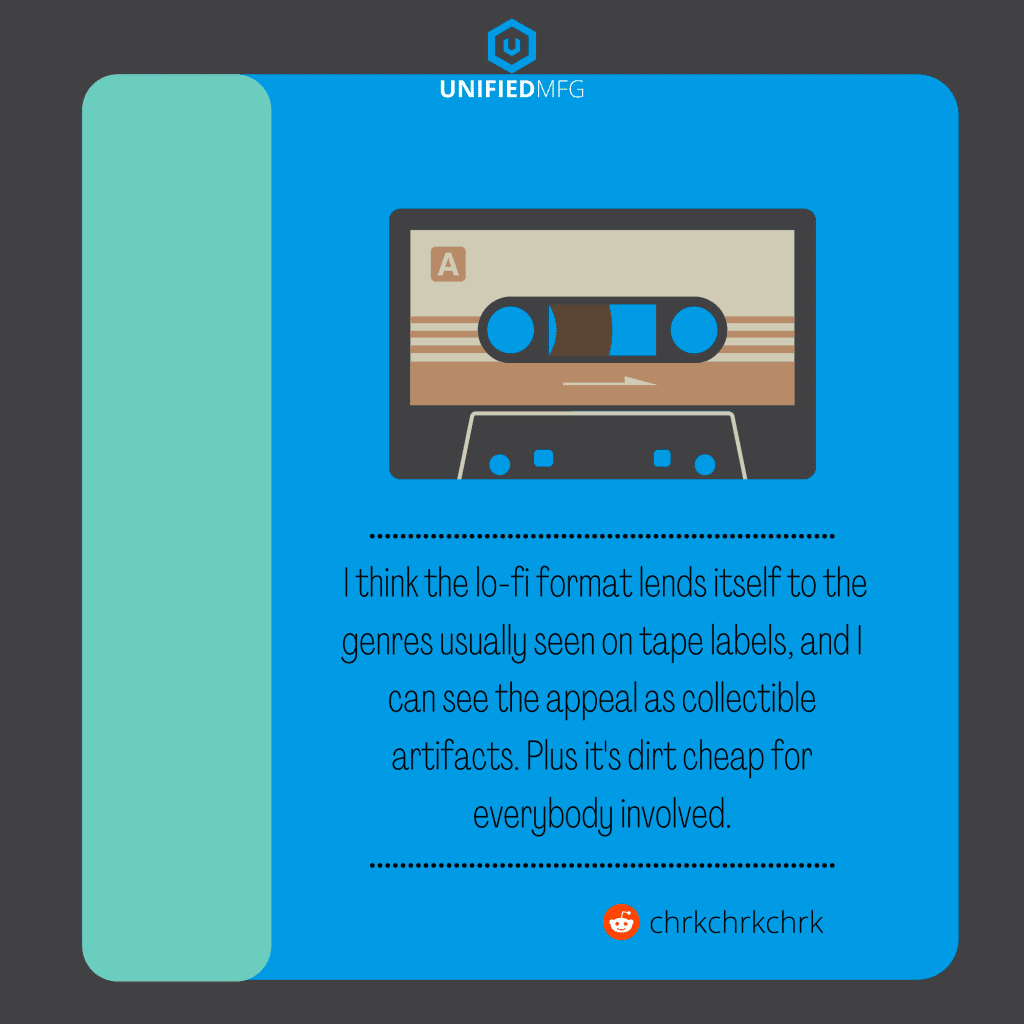 Music is music no matter the format it’s stored on, and I don’t see the issue with music fans creating / disseminating / buying it in whatever form they choose. Honestly, the tape scene looks like a lot of fun – I can appreciate the DIY philosophy.

I think the lo-fi format lends itself to the genres usually seen on tape labels, and I can see the appeal as collectible artifacts. Plus it’s dirt cheap for everybody involved.

Reading through the replies in this thread, I have to wonder – why are some people so strongly opposed to the idea of cassette releases? For such a niche movement, there seems to be plenty of people with a vested interest in speaking out against it. 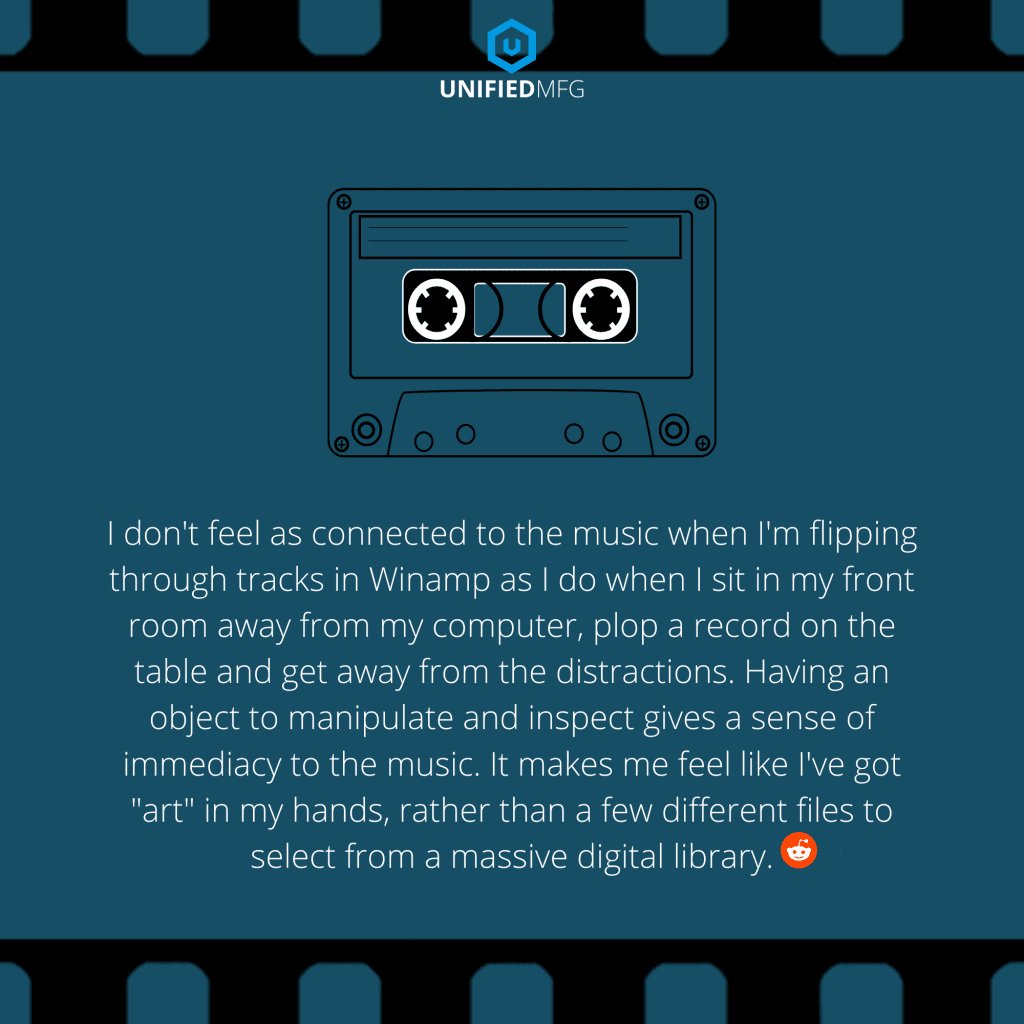 I don’t feel as connected to the music when I’m flipping through tracks in Winamp as I do when I sit in my front room away from my computer, plop a record on the table and get away from the distractions.

Having an object to manipulate and inspect gives a sense of immediacy to the music. It makes me feel like I’ve got “art” in my hands, rather than a few different files to select from a massive digital library. 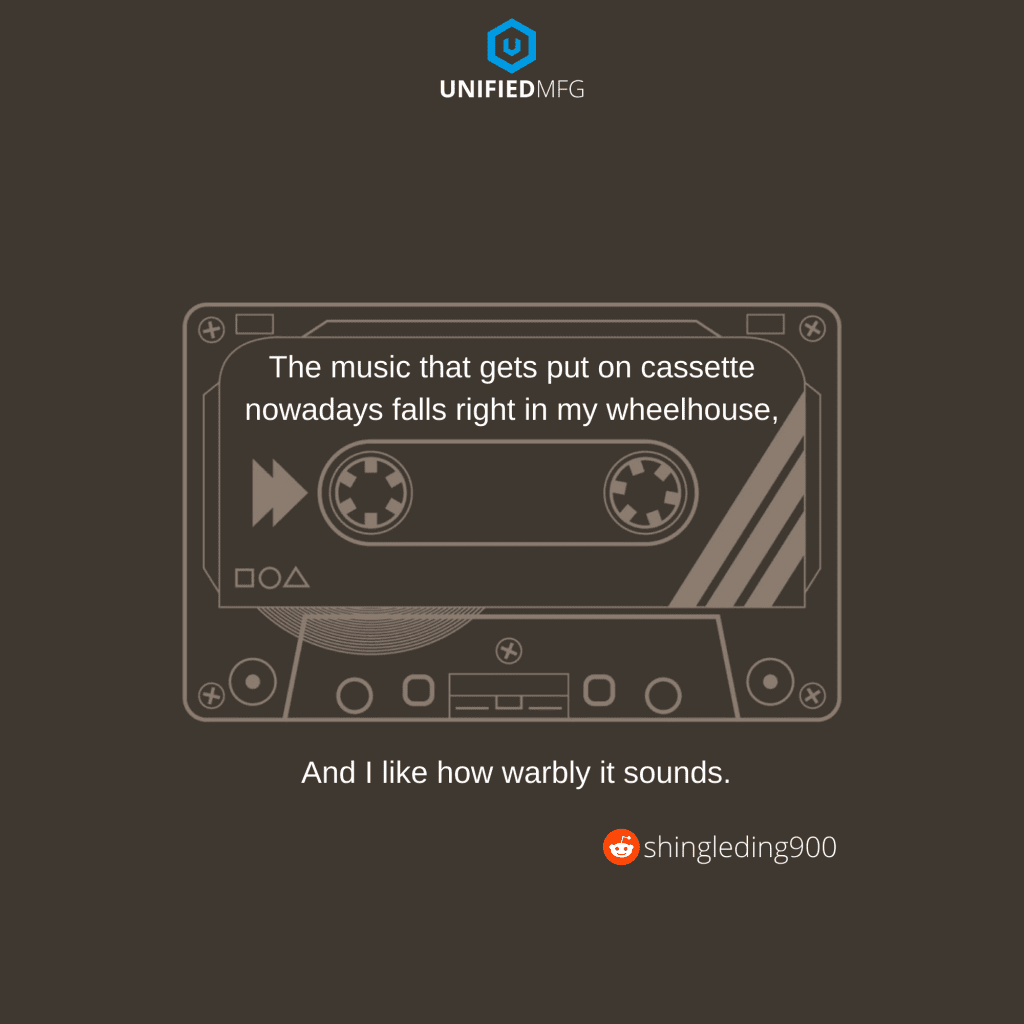 They’re really cheap and fun to collect, the music that gets put on cassette nowadays falls right in my wheelhouse, and I like how warbly it sounds.

They usually have awesome alternate artwork too, it’s just another way to experience the music that some people enjoy. totally understand people who hate it though.

#9 Every now and then 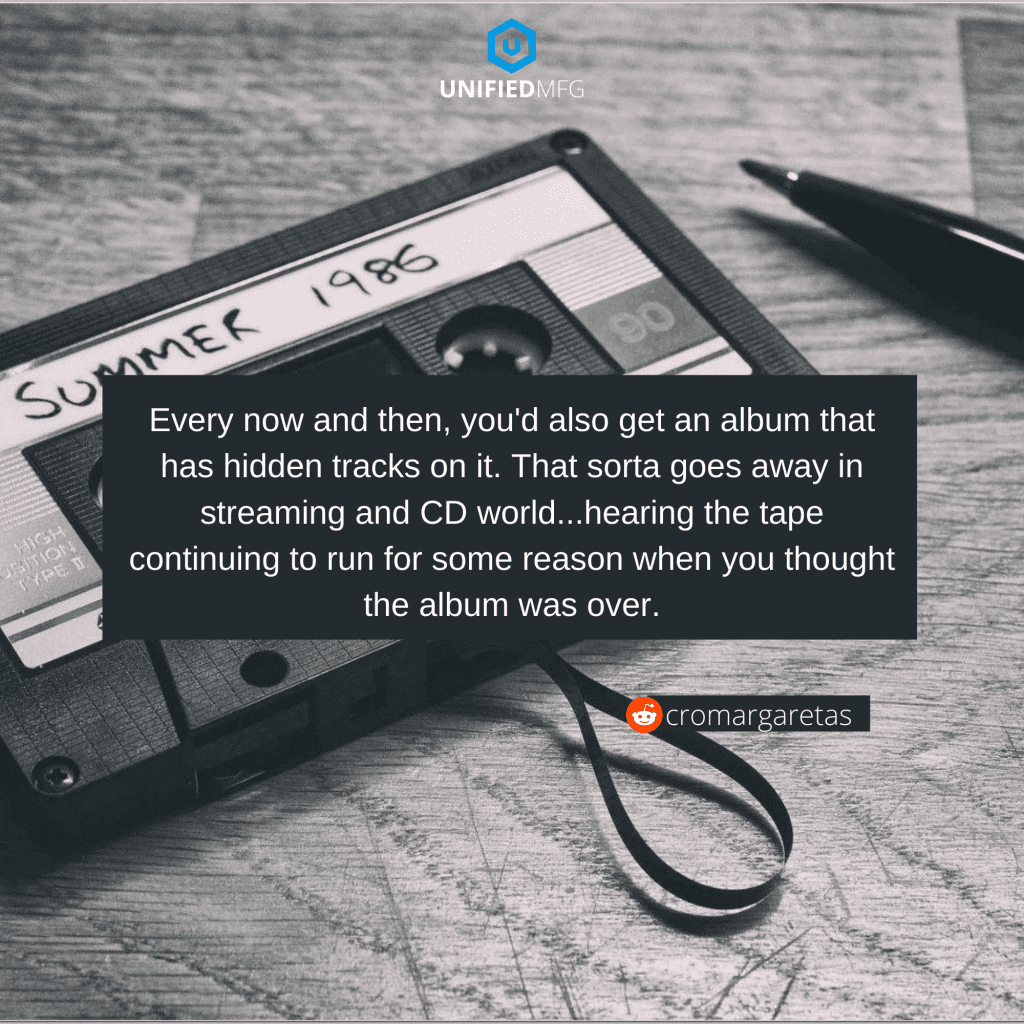 I listen to a lot of local punk bands and cassettes are more affordable to make than vinyl. there’s some nostalgia and tradition involved in it, but the bands themselves might opt for tapes at times just to cut cost and turnaround time.

Every now and then, you’d also get an album that has hidden tracks on it. That sorta goes away in streaming and CD world…hearing the tape continuing to run for some reason when you thought the album was over.

#10 Cassettes save the day! 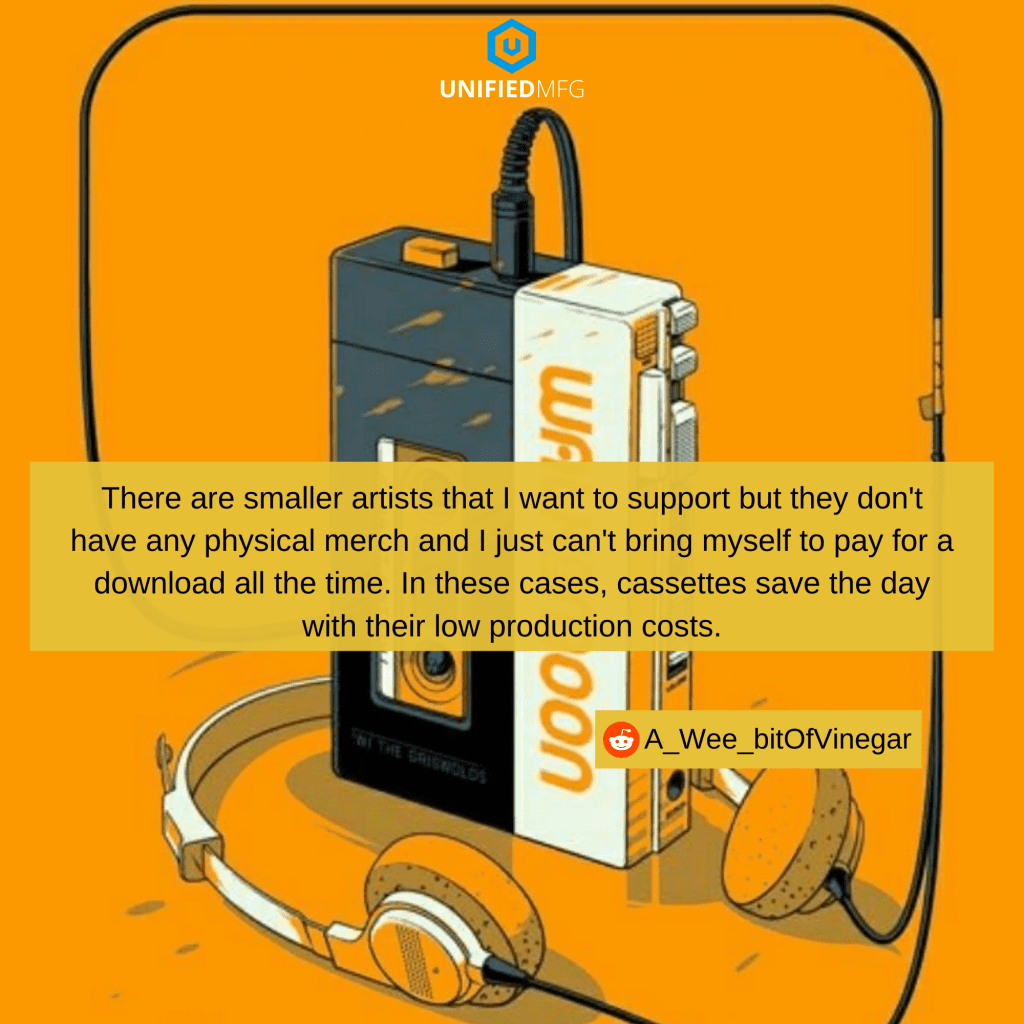 I agree on this point. For the most part I don’t really like CDs and the price of producing vinyl for small artists can be too prohibitive and/or result in too high of retail prices.

There are smaller artists that I want to support but they don’t have any physical merch and I just can’t bring myself to pay for a download all the time. In these cases, cassettes save the day with their low production costs.

Hell, I’ll even take one of those credit card sized flashdrives with the music and pdf liner notes on it and the album art printed on the front, but give me something tangible.

And cassettes can sound nice if you have a quality deck and good tape stock. It may not be Hi-res quality but I feel like people heavily discount how good a cassette can sound, or think that all cassettes are going to have high wow/flutter. 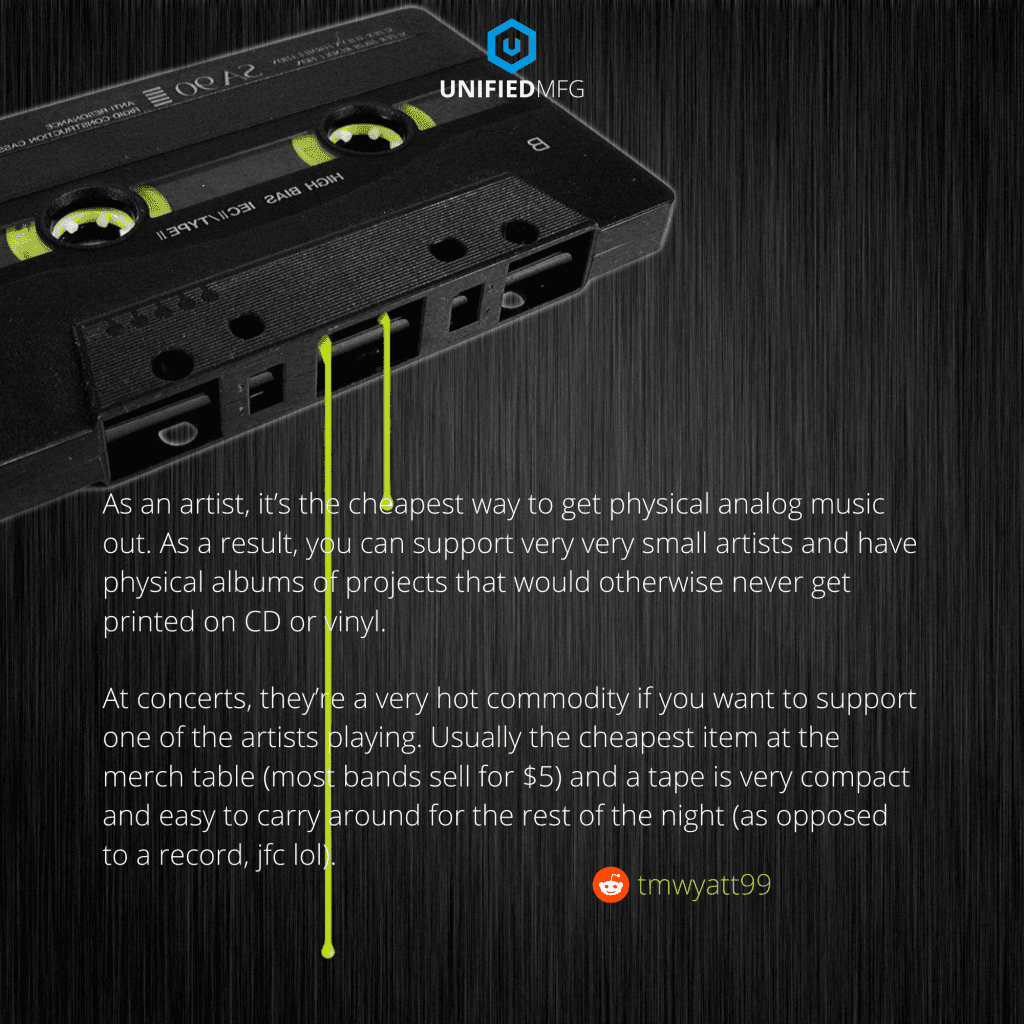 As an artist, it’s the cheapest way to get physical analog music out. As a result, you can support very very small artists and have physical albums of projects that would otherwise never get printed on CD or vinyl.

At concerts, they’re a very hot commodity if you want to support one of the artists playing. Usually the cheapest item at the merch table (most bands sell for $5) and a tape is very compact and easy to carry around for the rest of the night (as opposed to a record, jfc lol).

If you have a car player, they can be a lot of fun. Otherwise most thrift stores sell used cassette decks for like $10-20 and are a great addition to any stereo system. 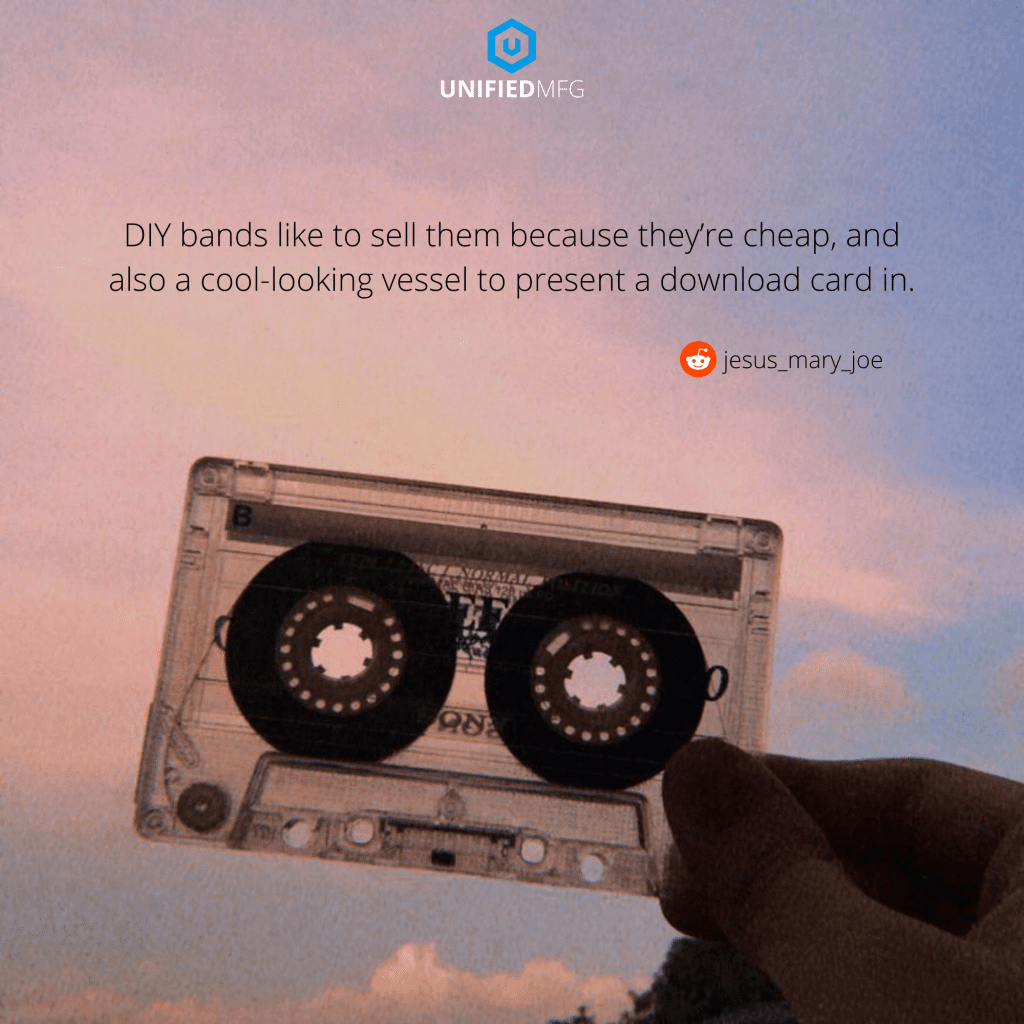 DIY bands like to sell them because they’re cheap, and also a cool-looking vessel to present a download card in.

As for consumers, there’s pretty much no reason to own one aside from aesthetic. Tapes have no real noticeable sonic qualities that distinguish them from CDs, other than they deteriorate and sound like shit within a few years.

#13 Encourage people to listen to 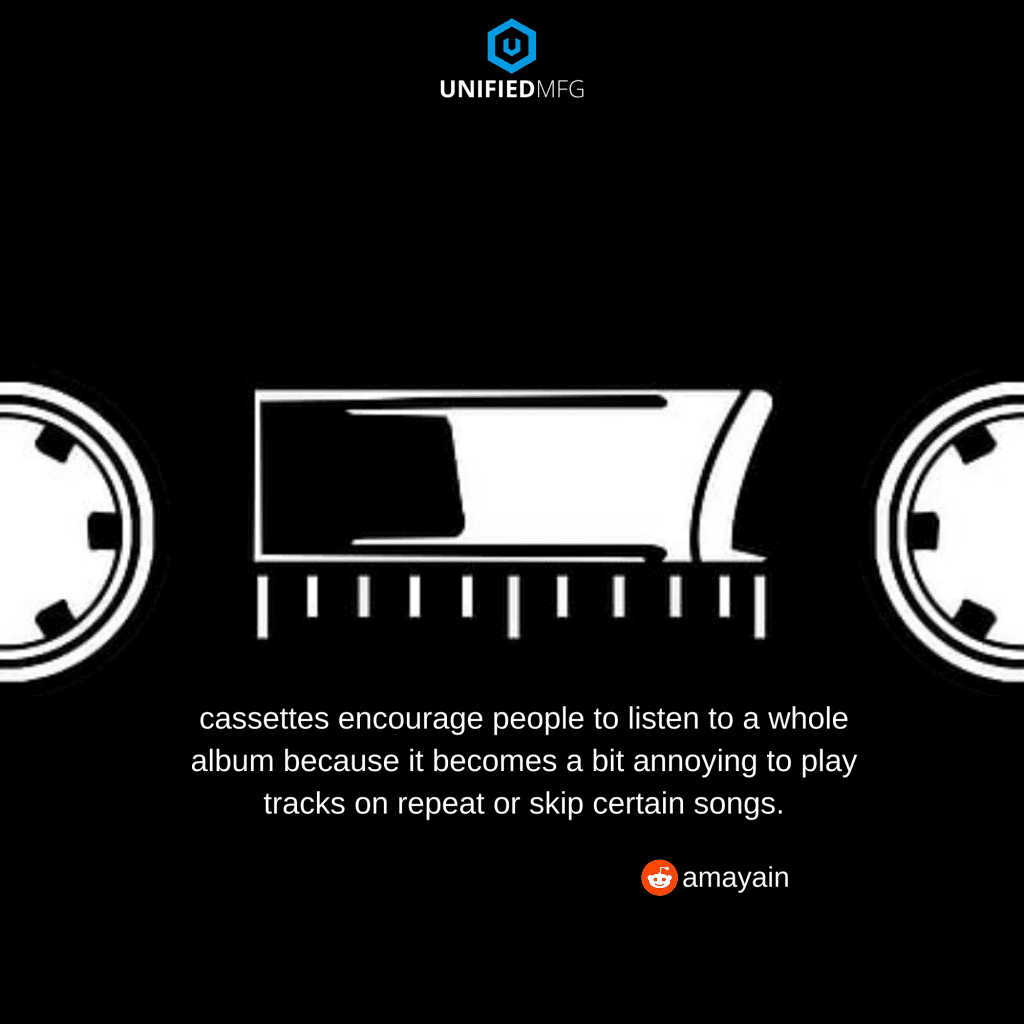 Something I haven’t seen mentioned yet is that cassettes make it annoying to find the start of a track and it takes more than a second or two to fast forwarding/rewinding (unlike cds, mp3s, or vinyl), thus

Cassettes encourage people to listen to a whole album because it becomes a bit annoying to play tracks on repeat or skip certain songs. 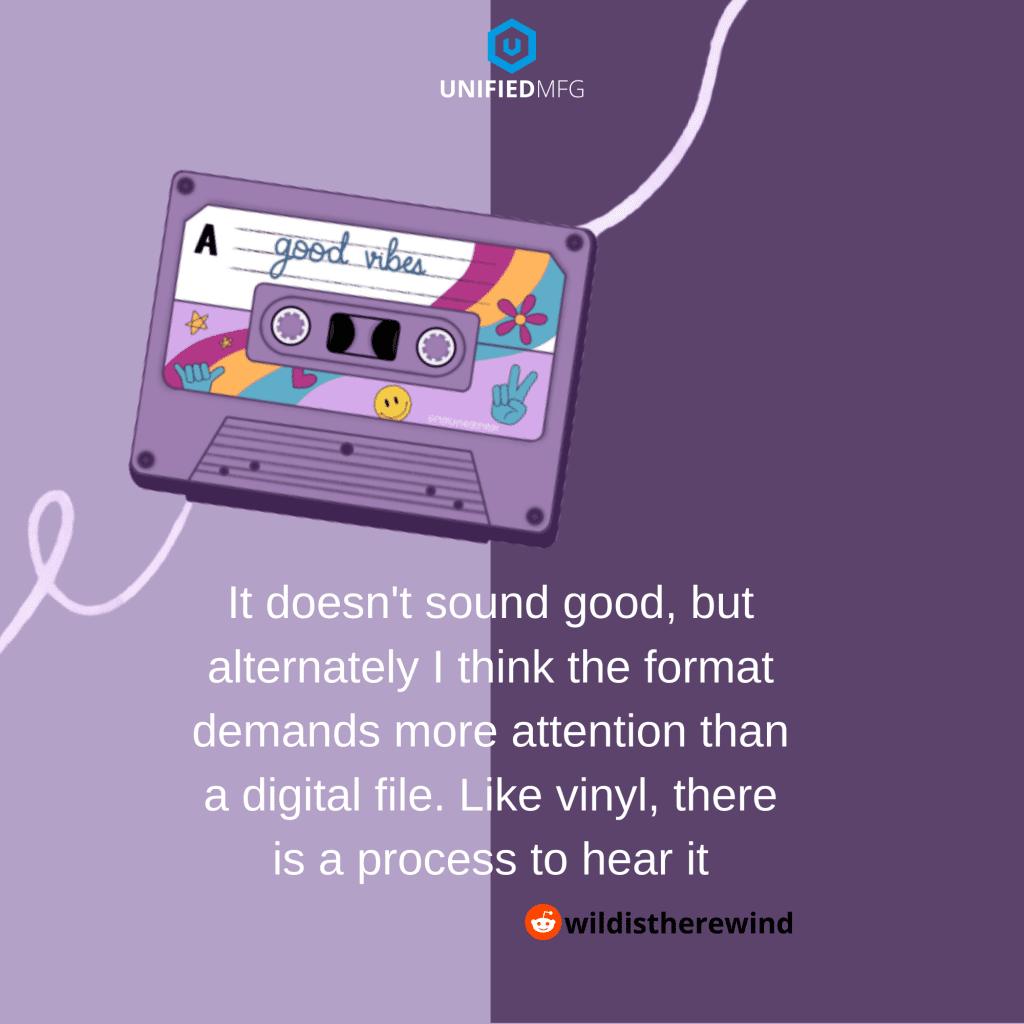 So two albums I made were released on cassette by a label. The answer is probably no, it’s kind of more an aesthetic choice than anything else. It doesn’t sound good, but alternately I think the format demands more attention than a digital file.

Like vinyl, there is a process to hear it, and that unpacking and putting something into a player is more meaningful than streaming something off of your phone where you can skip to the next thing at any time.

Also, some things are cassette only, like some noise music. The format lends himself to weird music that already has low fidelity. 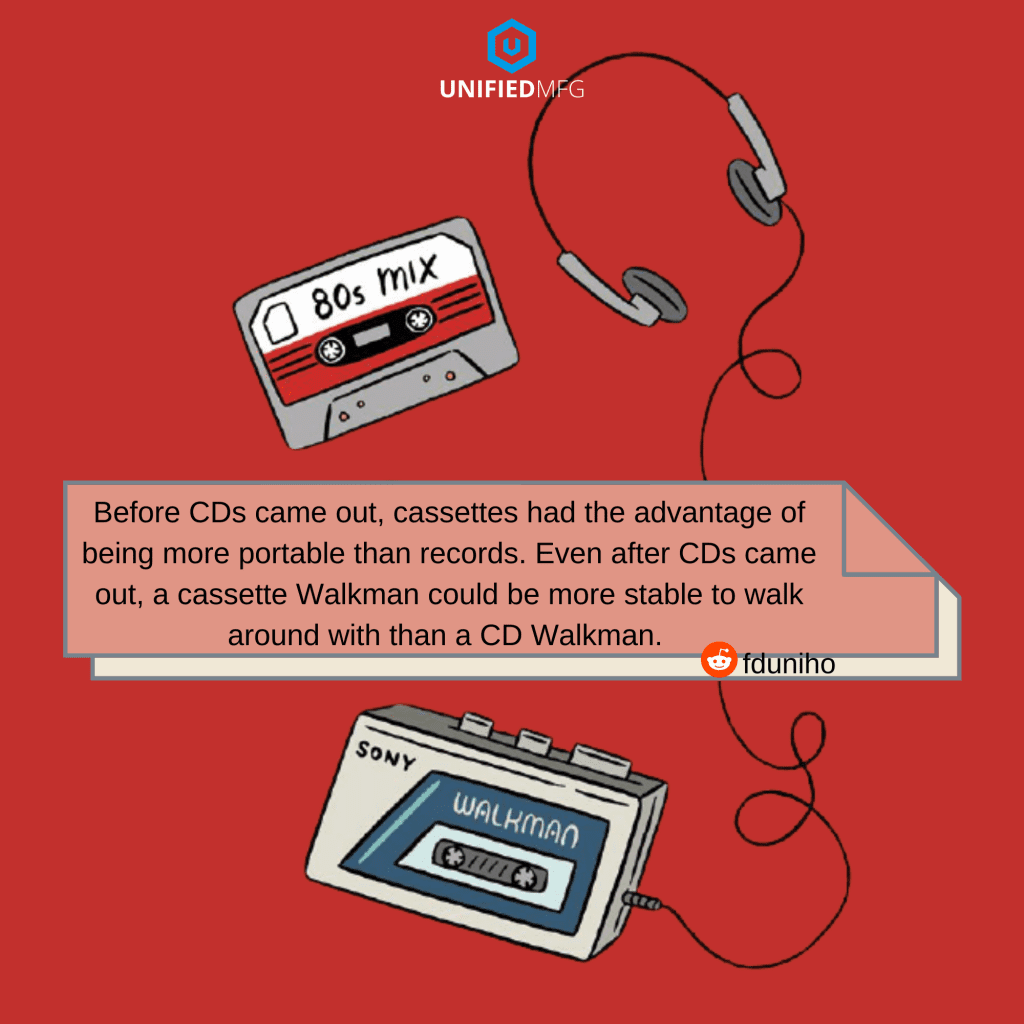 Before CDs came out, cassettes had the advantage of being more portable than records. Even after CDs came out, a cassette Walkman could be more stable to walk around with than a CD Walkman.

Now that we have MP3 players and mobile devices that can stream music, there is really no place for the cassette.

An MP3 player is much more stable than a cassette player, has much clearer fidelity, can store a lot more music, is much more compact, and is not as subject to being damaged as a cassette tape.

Even if you do find something on cassette that is not available through another format, you could play its audio into your computer and save it as computer files to play on an MP3 player. So, no, there is no good reason, apart from nostalgia, to collect cassettes.

Like you, I do not feel any nostalgia for cassettes. I initially grew up with records, started using cassettes for convenience, and eventually moved on to more convenient ways of listening to music. 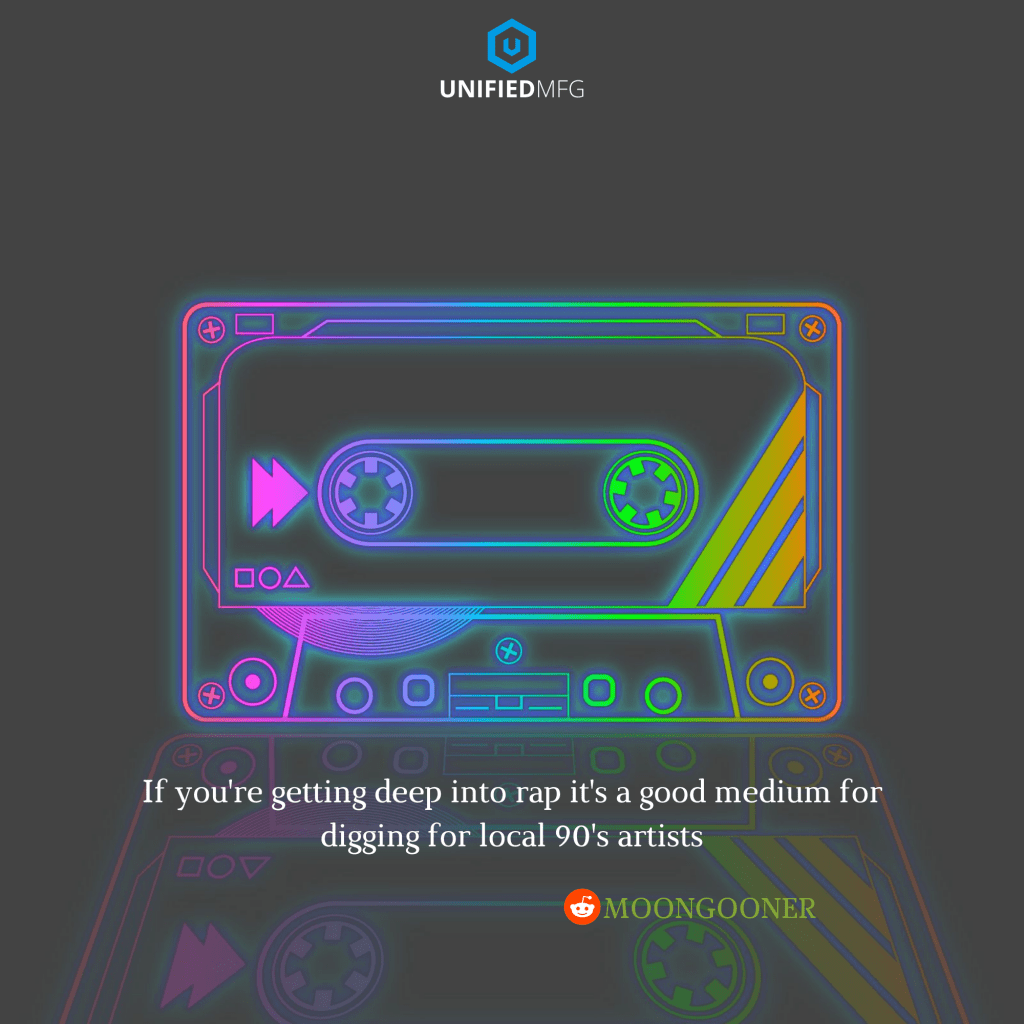 If you’re getting deep into rap it’s a good medium for digging for local 90’s artists.

They’re quite legit reasons, aren’t they?

Would you buy and listen to cassette tapes even if we can just stream or download music or watch music videos on Youtube?

If you’re a musician, would you release some custom cassette tapes?

A swivelCard is a premium paper business card that includes a USB drive–a smart business card.  It includes analytics and can be updated even after giving it out. This one above is a smart, disposable, wireless SwivelCard USB called Intellipaper. What Can swivelCard Do? Paper comes alive with embedded USB technology. Imagine giving your business […]

Let the designers do the designing…and no one else! So you don’t want to pay a designer because you think you can do it? Nothing too hard about it, right? Just sketch a cool thing that would possibly look awesome on a tee and print it with your band name. That’s it! No need to […]