The war between Ukraine and Russia has been going on for 15 days now. And according to Reuters there has been an estimated 13,000 deaths, 1,800 non-fatal injuries, 2.1 million displaced people.

It is a devastating event for all Ukranians and people from all over the world are doing what they can to help them.

There have been a lot of fundraisings and support for the people of Ukraine and one of the most active individuals are our beloved musicians.

Let’s see what they have done so far for our brothers and sisters in Ukraine.

Some musicians have been seen posting about fundraising that would help the people of Ukraine.

There were also musicians who were directly involved with these fundraisings, donations and charities.

Here are some of them: 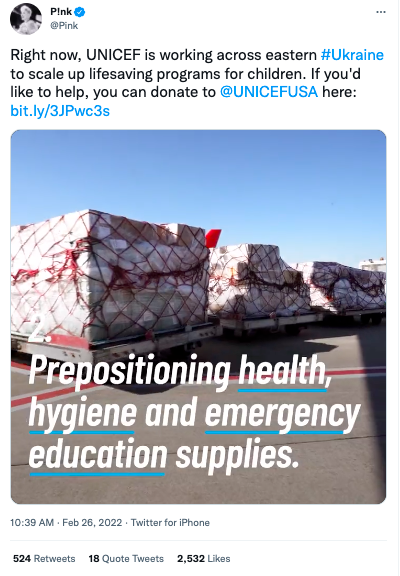 We have Pink who tweeted about the donation drive and children’s program UNICEF has for the children of Ukraine. When you click here you will then be redirected to UNICEF USA’s website where you can choose how much you will be donating for the children. 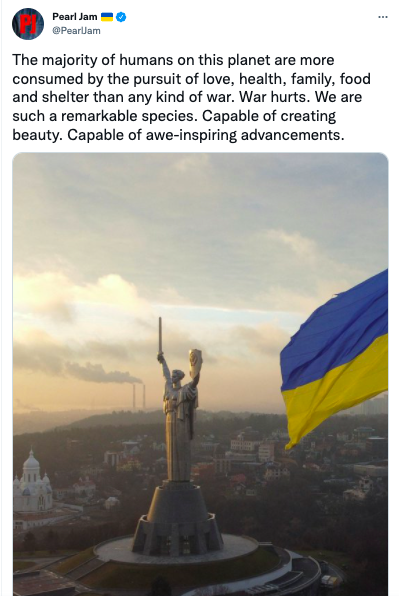 In the 2-tweet twitter thread that the rock band, Pearl Jam, posted, we see them praising humanity for being the bringers of good things in this world and that war should not be one of them.

On the second tweet they posted these sentences, We must be capable of resolving conflict without bloodshed. Join us in supporting the most vulnerable victims of this horror, the kids: They then ended it with a link to Voices of Children, a foundation for children that are victims of war. 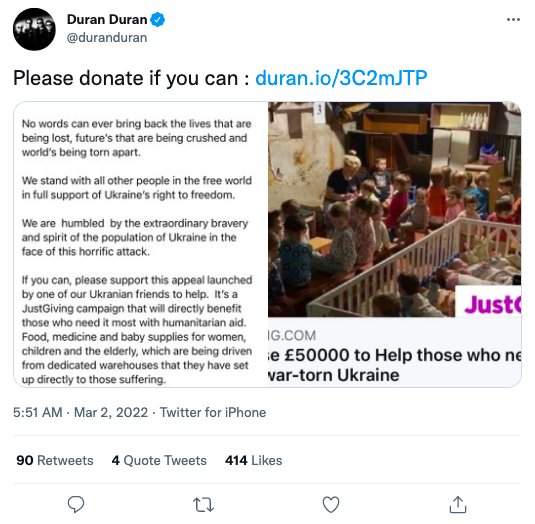 Duran Duran foundÂ another fundraising event which was hosted by a Ukrainian who goes by the name Lenka Chubuklieva. In the bands post, we see two photos posted one is the fundraising which was done through Just Giving and the other was a screenshot of what the band wants to say with the situation at hand. If you want to join and track where your donations go, click here. 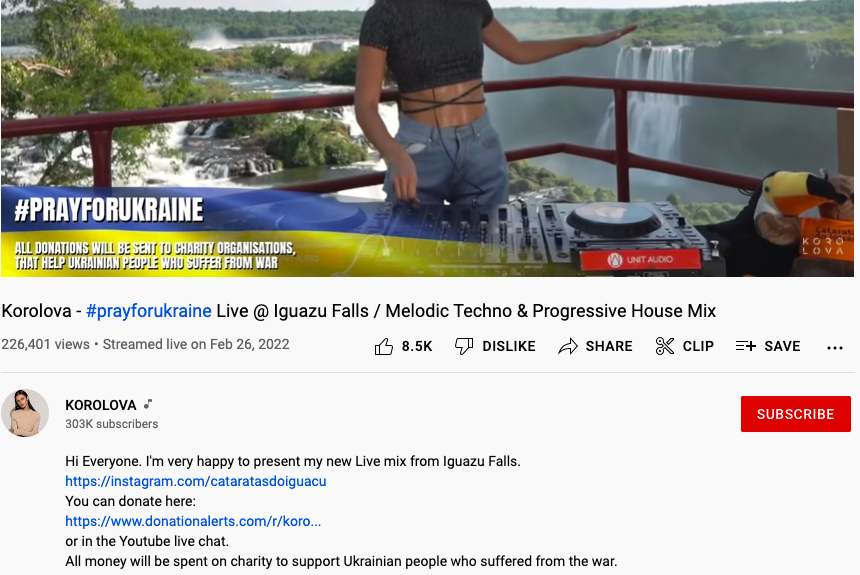 Olga Korolova is a Ukrainian musician who lives in Chernihiv, Ukraine and has taken refuge in Poland during the first day of invasion. After arriving in Poland she had herself a gig where she said she had cried while playing.

The fee for the gig was then donated by her to her countrys army and to charities that helped people who are displaced by the conflict. Another thing she did was hold a fundraising event on her YouTube channel where she posted a link to where you can donate. 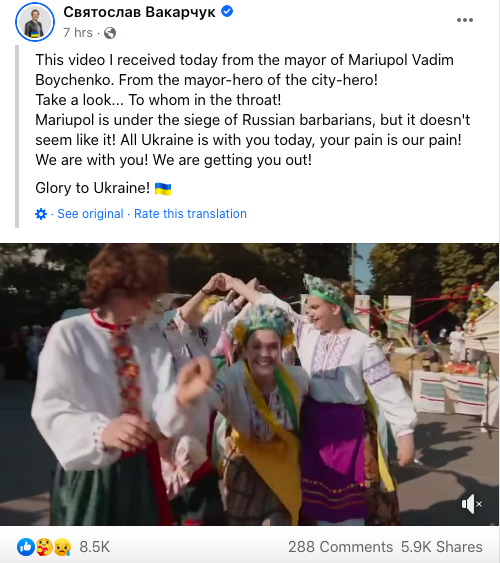 Svyatoslav Vakarchuk, more commonly known as Slava, has been seen on his Facebook video updates visiting wounded soldiers and delivering food and fuel to Kyiv while driving his car. To see more of his kind acts you can visit his facebook account here.

GIVING THE UPDATES ON WHAT IS HAPPENING IN UKRAINE

Unlike international musicians, only the Ukrainian ones can give us an update on what is happening to Ukraine. And they surely didn’t disappoint because they are actively updating us and their fans of the situation in Ukraine. 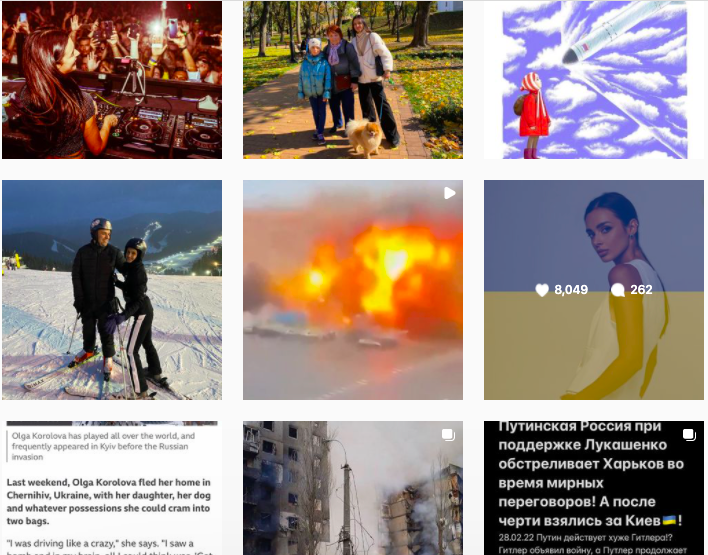 For Olga, she did her updates using her Instagram account. According to BBC, her goal was to let fans see, especially her Russian fans, of what really is happening since most of them do not believe it.

She apparently had Russian fans messaging her with lines like it’s not true, It’s all a lie. All of your posts are a lie. With this kind of reaction from Russian fans we can clearly see how their updates are important new outlets for those who don’t really look into news. 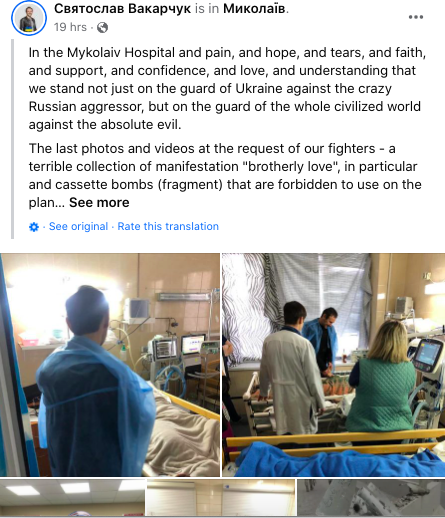 And we have Slava with his Facebook account where he posts videos not just of his humanitarian acts but also of updates on what is going on in Ukraine right now. To see more of it, you can try visiting his account. You will see lots of latest videos and pictures from him.

There are a lot more of these musicians who are doing something for the Ukrainian people with continuous fundraising events and donation drives. Here are some upcoming ones compiled by Martin Guttridge-Hewitt, where DJs are participating.

GIVING THEIR SUPPORT AND PRAYERS

At the news of Russia’s invasion of Ukraine, many musicians around the world have taken to social media to show their support and give their prayers. Here are some musicians who are using their influence to show their solidarity with Ukraine.

Although these acts aren’t as direct as the ones actually donating, they give people ”Ukrainians and the rest of u” a feeling of hope…that we are here to protect freedoms. 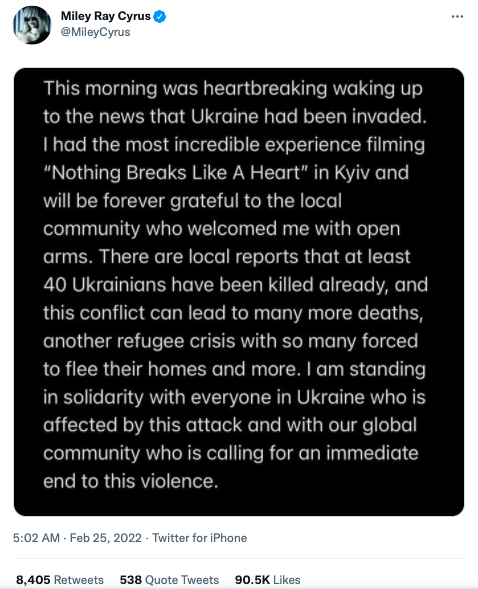 First on our list is Miley Cyrus who posted a screenshot  on Twitter of what she felt for the evil decision Putin has made. She started her message with, This morning was heartbreaking waking up to the news that Ukraine has been invaded.

She then continued with a small anecdote of her experience with Ukrainians, and how she has seen reports of death and people fleeing the country.

She ended her message with the sentence, I am standing in solidarity with everyone in Ukraine who is affected by this attack and with our global community who is calling for an immediate end to this violence. 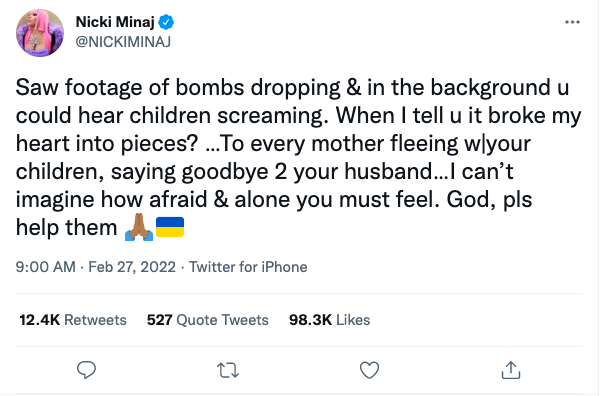 Nicki Minaj also did the same as she was seen tweeting her thoughts seeing a video clip of how Ukraine was being bombed by Russia. As a mother, she feels for every mother in Ukraine who has to hear their children scream out of fear, flee the country with their children while leaving behind their husbands. 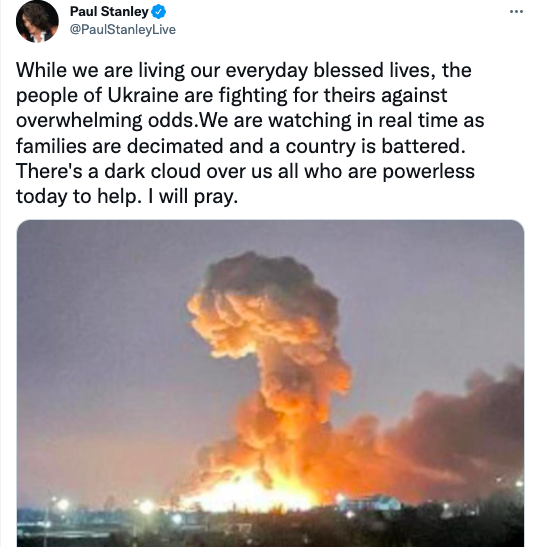 Paul Stanley started his tweet appreciating the blessed life we have which is clearly in contrast with the Ukranian’s. He then ended his tweet with these three words, I will pray. Given that he is powerless to help them be free of this attack he offered his prayers for the end of it. 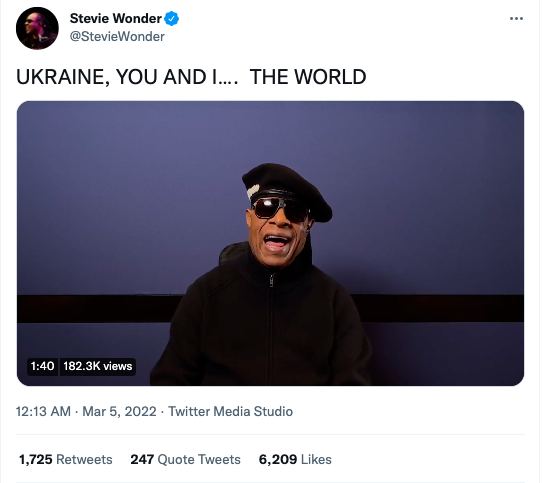 Stevie Wonder showed his support through  tweeting an almost 2-minute video of him encouraging people to take a stand against Russia aggression.

He goes on about how even a blind person, like him, can feel the hate and the brooding war and makes a move against it, so he said that people who can see should do the same.

Towards the end of his video, he said these very inspiring words, We must stand up to hate and kill hate before it kills us. 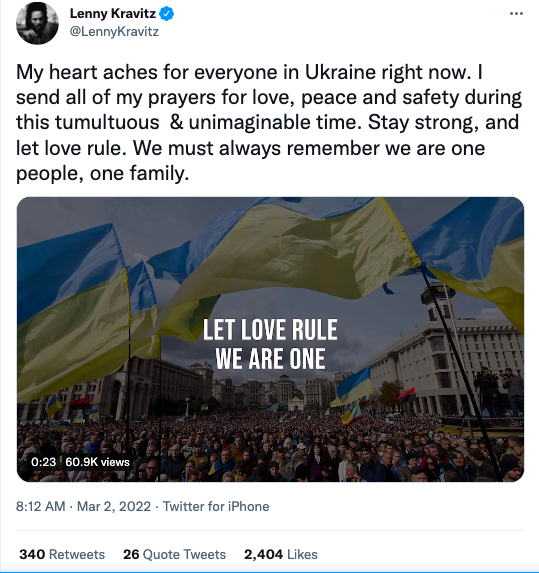 Lenny Kravitz with his #LetLoveRule memoir showed support for the people of Ukraine. He tweeted a paragraph highlighting that we are one family. He also added in a 48-second video featuring a picture of an assembly of people with the Ukraine flag moving with the wind.

The video had the artists The Faith of a Child song, released in 2011, playing in the background. It’s a song that speaks of how everyone is part of just one big family and that hurting one member of it would result in hurting the whole community. Listen to the song here.

Last on this short list is David Gilmour who posted the official lyric video ofÂ In Any Tongue, a song which he released less than 7 years ago. In Any Tongue was a song written by his novelist wife Polly Samson, and which also has anti-war lyrics. Posting the lyric video seemed very appropriate in this time of war in Ukraine.

Aside from being war anti, he also begged through his caption to have these attacks stopped for the sake of his grandchildren who have Ukrainian roots through his Ukrainian daughter-in-law. He ended his caption of Putin must go, showing how he condemns his decisions.

James Hill is a veteran of the music industry. He first worked at Warner Reprise Records then later joined Interscope/ Geffen Records where he managed producers and songwriters and got his first platinum record for Keyshia Coles The Way It Is. He is now helping indie artists with branding and manufacturing through his company Unified Manufacturing, a CD/DVD, custom vinyl records and merch company in LA.

CD packaging plays a very vital role in the music retail industry. Aside from its obvious function which is to protect and store CDs, the CD packaging has lots of other functions. It increases product sales, defines a band’s image, and many others. If you are a designer or if you are a musician who wants to create his own CD packaging, here is a step-by-step guide that you might find useful.

If you’re a filmmaker, especially if you’re an indie filmmaker,I’m pretty sure you would not consider releasing your film on USB flash drives. First of all, it’s pretty expensive. If you’re going to put a 2-hour film, you need a flash drive that has a high capacity. Movies released on flash drives usually cost $40 […]