Thanks to the internet, movie marketing has become more creative, fun, cheap, and doable by many. Unlike before when budget was the biggest factor for movie marketing, now its mainly about how kick-ass your idea is. On the internet, there’s a competition on what’s hot and cool and controversial. If you want your stuff to go viral, make sure its share-worthy or else it dies.  < Click this if you want to make viral videos that will really go viral>

Anyways, without further ado, here are some of the most successful viral movie promotion on the web.

With the release of “Meet the Spartans,” 20th Century Fox developed a microsite that allowed users to enter their name and upload a photo of themselves. The user would then be directed to a clip of Carmen Electra in the midst of an intervew about “Meet the Spartans.” The actress reveals that she is dating someone then shows off an interestingly placed tattoo and a photo of the lucky guy. That boyfriend turns out to be the person who entered his name and uploaded a photograph. The site received a considerable amount of traffic and helped the film to open at #1 at the US box office.

The Blair Witch Project was released on July 14, 1999.  The film cost a about $350,000 to produce and went on to gross nearly $250 million worldwide, giving it the highest profit-to-cost ratio of any film in history.  The incredible success of the film could be attributed to its unique website that effectively blurred the lines between fact and fiction.  The website, that still exists today, spoke convincingly of the mythology behind the Blair Witch, contained a realistic photo of the three filmmakers/stars with a caption that the photo was taken “less than a week before their disappearance,” along with a sideshow of other rather generic, yet real photos that made many believe that this site was actually authentic.  The gimmick worked!

Snakes on a Plane

The title alone screams viral. The b-movie concept attracted instant attention throughout the web once the general plot of the film was made public. The title and eventual trailer inspired countless mock-trailers, spin-off websites, and YouTube-broadcast parodies. Everyone talked about Snakes on a Plane, but then no one went to see it.  The much-hyped film was a box office dud. The lesson here – even if a great viral campaign takes off, the product being sold must also be interesting. 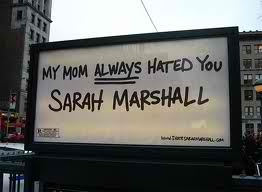 Do you remember the “Forgetting Sarah Marshall” campaign 2 years ago? There was a series of snarky, hand-scrawled advertisements on the sides of buses, subway platforms and telephone booths that targeted somebody named Sarah Marshall. Months before the release of the film, viral marketers put up a series of cryptic advertisements and started a blog, Ihatesarahmarshall.com, which purports to be the actual blog of Sarah’s bitter ex-boyfriend, Peter Bretter.

“Cloverfield,” before it was released in January 2008, was one of the most buzzed about films of 2007.  In fact, the initial teaser trailer shown before the 2007 “Transformers” film did not even reveal the film’s title, but simply ended with a website (1-18-08.com), further encouraging the web-driven marketing of the film. MySpace pages were created for many of the movie’s fictional characters, as well as for the fictional companies mentioned in the film. This maze of viral bait helped the film achieve the biggest January opening in history. “Cloverfield,” which was produced for $25 million, went on to gross more than $170 million worldwide.

Keeping in the same vein as “Cloverfield,” “The Dark Knight” took a similar approach in it’s viral efforts. One of the first promotional stunts involved a fake website for Harvey Dent’s (one of the main characters in the film) fictional campaign for District Attorney. Posters stating, “I Believe in Harvey Dent” were shareable and able to be emailed to friends. Once the other person received the email, the poster would slowly change to reveal the image of The Joker. Once the image was revealed, The Joker’s face was quickly replaced by the text, “see you in December.” Other websites attached to the film allowed for users to vote for various public offices throughout Gotham. More viral elements included a website devoted to the fictional newspaper “The Gotham Times” (which led to numerous other website that revealed info about the film) and the launching of WhySoSerious.com which revealed more images of The Joker as well as the first teaser trailer. Such elements combined with the stellar reviews of the film and breathtaking performance of the late Heath Ledger helped the film to gross more than $1 billion dollars worldwide.

Thanks to: Ignite Social Media

When you go buy vinyl records in the past, all you get is a vinyl on white inner sleeves. When you do buy in the present times, you get more than just those two. You get to have printed vinyl record jackets with artwork and even have inclusions along with it like photo books, lyric […]