Beyonce is selling merch without us knowing what’s actually inside it.

This fact gave it the nickname “invisible merch”, but they’re more like a “blind bag” than invisible, really.

But I bet you weren’t even surprised at all.

Besides, it must be fun.

Waking up to the news of Beyoncé’s seventh studio album is any Beyhive’s ultimate euphoria in these challenging times.

This year on the 16th of July, Tidal, owned by Beyoncé’s husband (Jay-Z), took to Twitter to announce the release date of the upcoming album.

It was a simple photo with a black background and the words “act 1 RENAISSANCE” in white, captioned with “Beyoncé RENAISSANCE July 29”.

This led to fans speculating that the album title is act 1 Renaissance and is the first part of a multi-part album titled Renaissance.

The limited vinyl edition as well as the box sets were named Renaissance, confirming that it is the album’s title. But this album being part of a multi-part album cannot be ruled out still.

Now enough with all that.

Let’s talk about Beyoncé’s box set. There were a total of 4 different versions of the box set called Pose 1, Pose 2, Pose 3, and Pose 4.

As of July 22, 2022, just 6 days after the announcement, all four versions have been sold out.

What’s funny about this though is that there have been no further details on what’s inside these box sets, how they look like, and how they differ from each other.

And even if they’re sold out right now, don’t lose hope.

They may restock them for you soon so watch out for it. 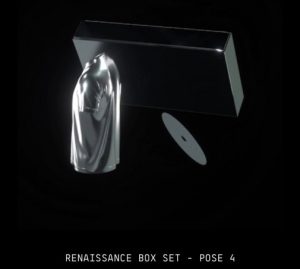 You might be having a difficult time choosing the best version. My suggestion for you is to get all of them if you have a lot of money to spare. If not, then you better choose Pose 4.

If you’ve been a Beyhive for a long time I’m pretty sure you know the reason why. But let me explain still, for those who aren’t.

The number 4 is Beyoncé’s favorite number.

Her wedding day happened on the fourth day of the fourth month of the year, April 4 (4/4). Her birthday is on September 4 while her husband’s is December 4.

Lastly, fans think that their first-born, Blue, got her second name, Ivy, from the Roman numerical representation of 4 which is IV.

Now if you want to know and see face to face all the other versions of the box set, I suggest you talk it out with friends who’re fellow Beyhives. This way you’ll be able to exchange within your circle, whatever you want to have exchanged. Additionally, you will have a solid reason for buying the other versions if you liked one or all of them.

It has been almost 6 years of waiting for her Lemonade album so if you haven’t pre-saved her album yet, do it now.

It would be best if you order her Renaissance limited vinyl edition too. It’ll be a one time pressing as mentioned in her online store.

Even if there’s no visual details yet, you gotta grab the chance or they may get sold out before you decide to buy one for yourself. It’ll surely be a wasted opportunity, don’t wait for it to become one.

The boxes will start shipping on July 29, the day of the album’s release so just be patient. Though I’m pretty sure you already are, given the almost 6 year-interval between her albums. Oh! And before I forgot, Beyoncé has already released her first single from the album titled Break My Soul.

She uploaded a lyric video of the single on her YouTube channel. And the first text to flash were “6. Break My Soul”. Given that it was numbered 6, then it’s safe to say that it is the sixth track of the album.

Give it a listen now on any streaming platform.

Timing is Everything When It Comes to Releasing An Album

Releasing an album is a make or break scenario for any musician. It determines whether you’ll make it big or you have to work much harder. Timing is everything when it comes to releasing an album. Well…not really everything because your music is more important but it plays such a big factor in the success […]

No matter how independent and brave and modern a woman is, she is still bound to worry about her career in art once she steps inside motherhood territory. This kind of dilemma is also experienced by men but only if they’re not earning enough to support the family. But for women, even if they earn big bucks […]