When it comes to badass indie film releases, A24 takes the cake!

A24 is an independent entertainment company that’s behind films like Hereditary, Mid90s, Lady Bird, and Everything Everywhere All At Once.

So we figured, it’s simply a must for us to check out their merch!

We all know how much merchandise can raise both interest and awareness of a film, or any business for that matter. And A24 certainly knows how to take it to the next level.

In the article, we’ll be introducing to you some of A24’s films and the awesome merch they’ve released for it. Uncut Gems was a crime thriller film released in 2019 directed by Josh and Benny Safdie.

It was distributed in the United States by A24, and internationally by Netflix.

The film is all about a charming jeweler, portrayed by Adam Sandler, who must balance business, family, and adversaries as he makes a high-stakes bet that could result in a big win.

For the film’s merch, a necklace with a golden pendant was released for it.

The pendant was an inspiration from Howie’s KMH originals. It is made with gold-plated stainless steel adorned with Australian crystals. 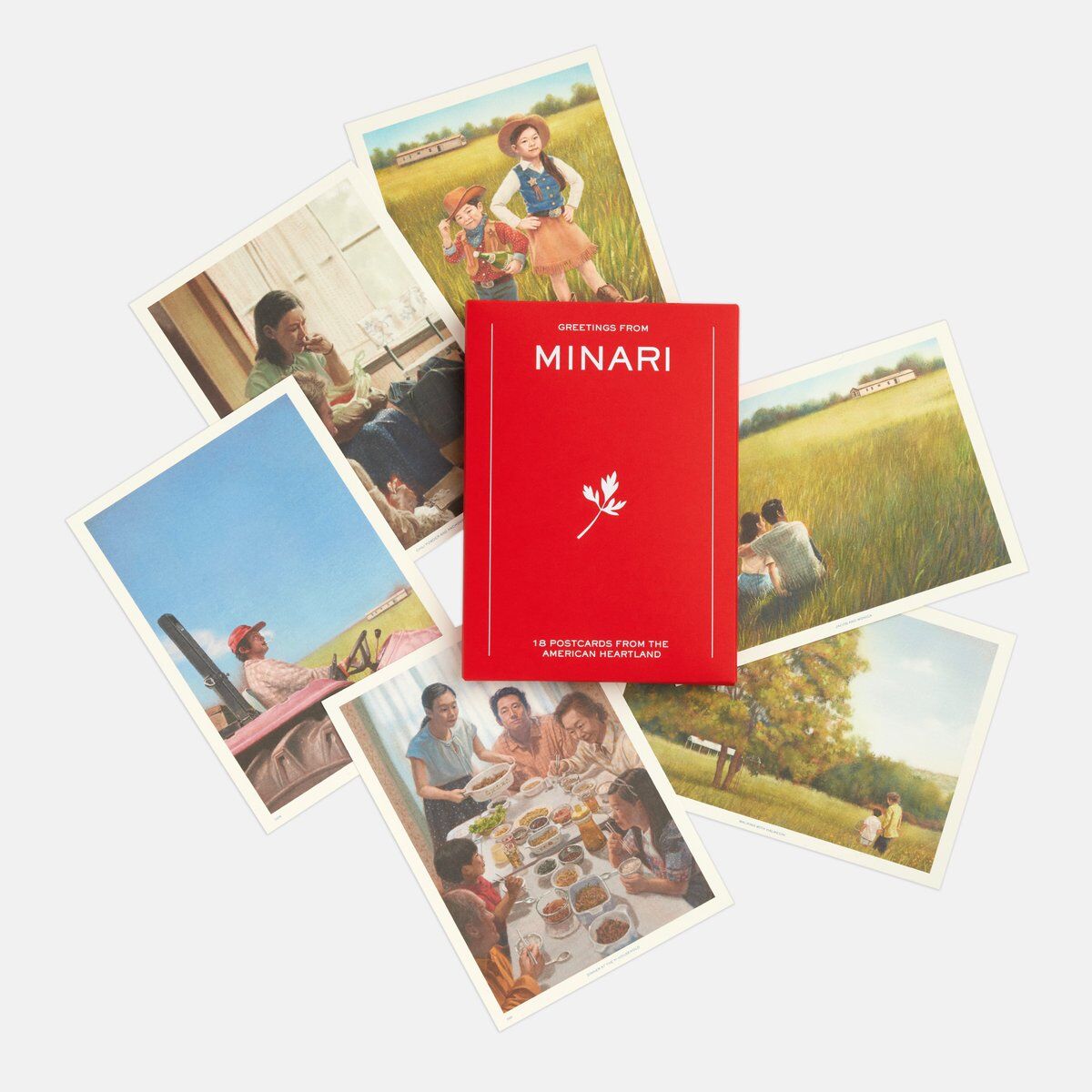 Released in 2020, Minari is a drama film that stars Steven Yeun, Han Yeri, and more.

It focuses on a Korean-American family who discovered the irrefutable strength of family and what truly defines a home as they face challenges when they move to an Arkansas farm.

This family-centric film went with postcards as its merchandise.

The merch is a set of 18 postcards stored in a foil-printed red band and envelope.

The postcards feature 6 illustrations created by Sojung Kim-McCarthy and also include a message from the filmmaker of Minari, Lee Isaac Chung.

6 Reasons You Must Absolutely Bring Postcards To Film Festivals 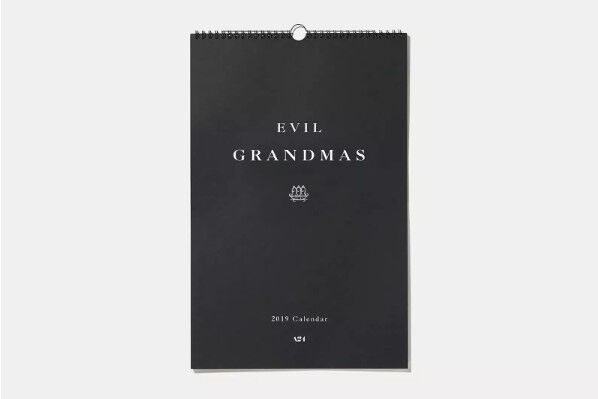 Hereditary is a 2018 supernatural psychological horror film that revolves around the Graham family, who are plagued by a mysterious presence after their grandmother, who harbors a lot of secrets, dies.

This merch is inspired by the scary but cute grandmother who’s the root of the horrors that occurred in the film. 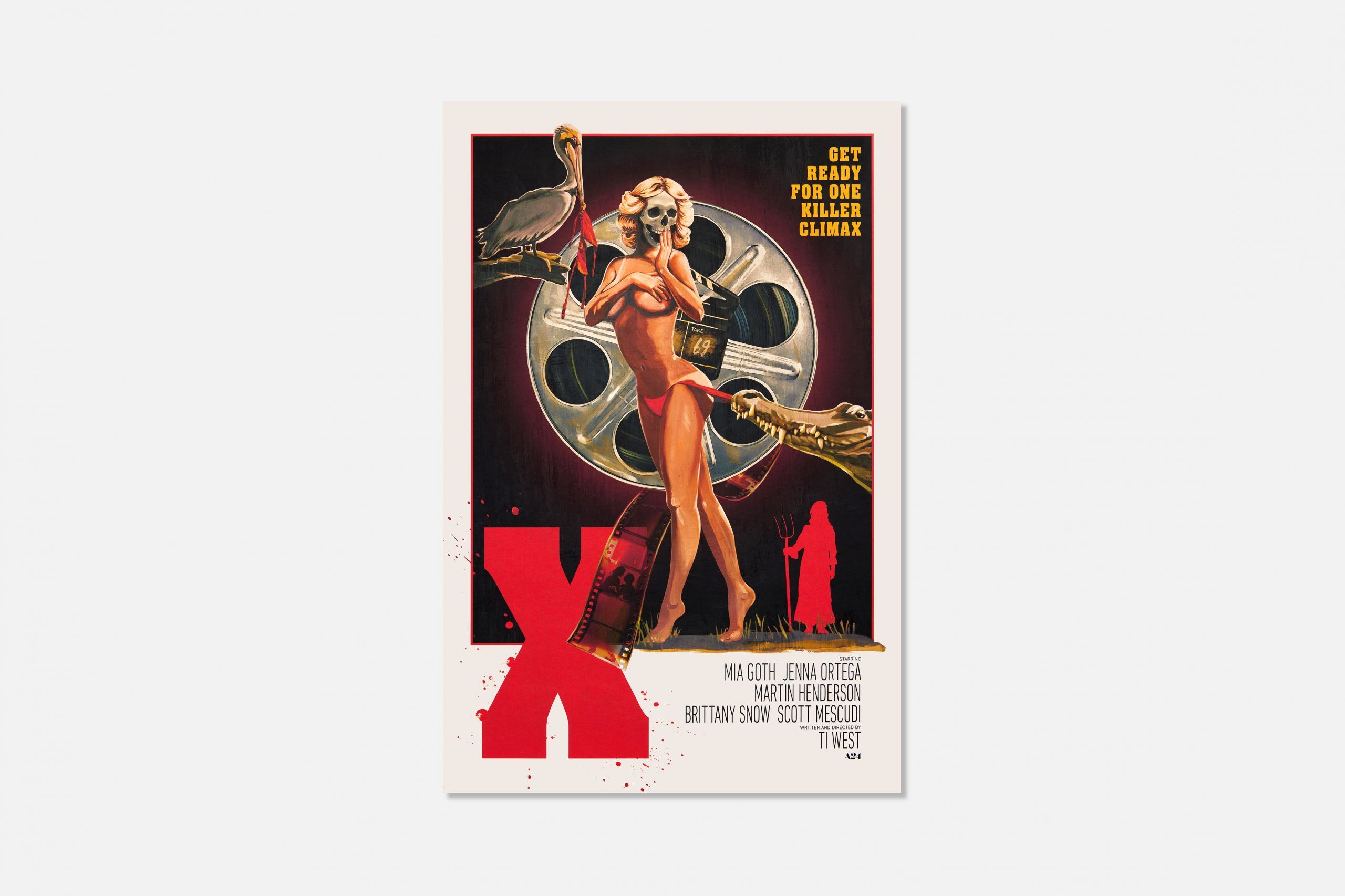 The 2022 slasher film, X, tells the story of a group of actors who travel to rural Texas property owned by an elderly couple to make a pornographic film.

However, they find themselves fighting for their lives when they are threatened by a killer.

The art print for the film is a limited edition one with only 500 copies available. The artwork is printed on enhanced matte cover stock using archival inks.

#5. EVERYTHING EVERYWHERE ALL AT ONCE HOTDOG FINGERS 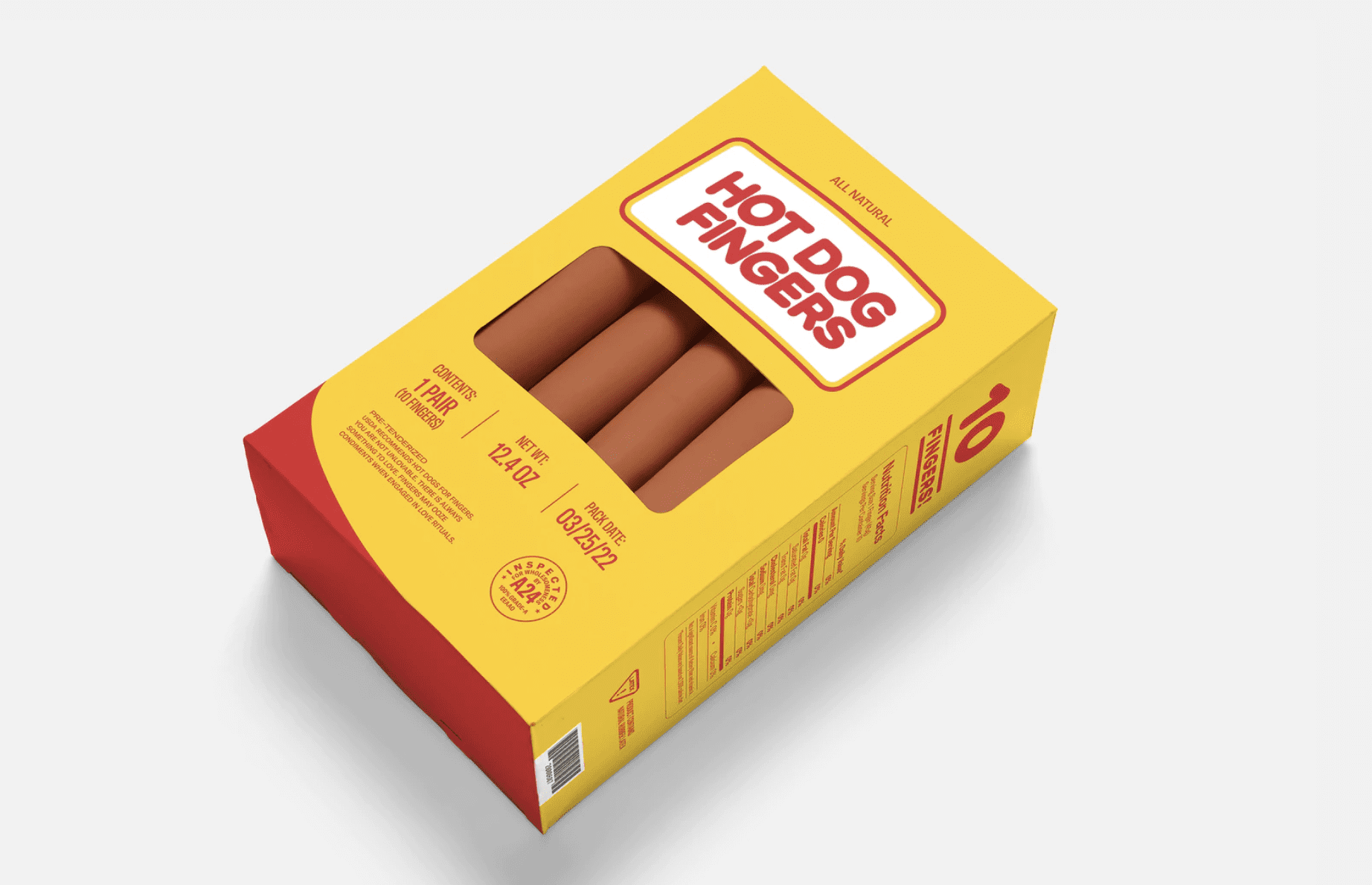 Everything Everywhere All at Once is a 2022 comedy-drama film that features Michelle Yeoh playing a Chinese-American lady who is being investigated by the IRS.

They discover that she must communicate with parallel world versions of herself to stop a terrible beast from destroying the multiverse.

For this film, they released merch that many fans of the film would love and have to have. And you guessed it right, it’s the latex gloves with hotdog fingers that were seen in the film.

The epic medieval film released in the previous year is an adaptation of the 14th-century poem titled “Sir Gawain and the Green Knight”.

The Green Knight tells the story of how the headstrong nephew of King Arthur confronts the mysterious giant Green Knight that appears in Camelot.

Having Sir Gawain’s sword as the film’s merch sure is a good decision. The sword has an antique copper handle and a stainless steel body with debossed detailing.

It also includes a faux-leather sheath with accent stitching and the debossed text: “Prove thy worth, or off with thy head” and a custom case with green lining.

WHAT’S THE DIFFERENCE BETWEEN EMBOSSED AND DEBOSSED? 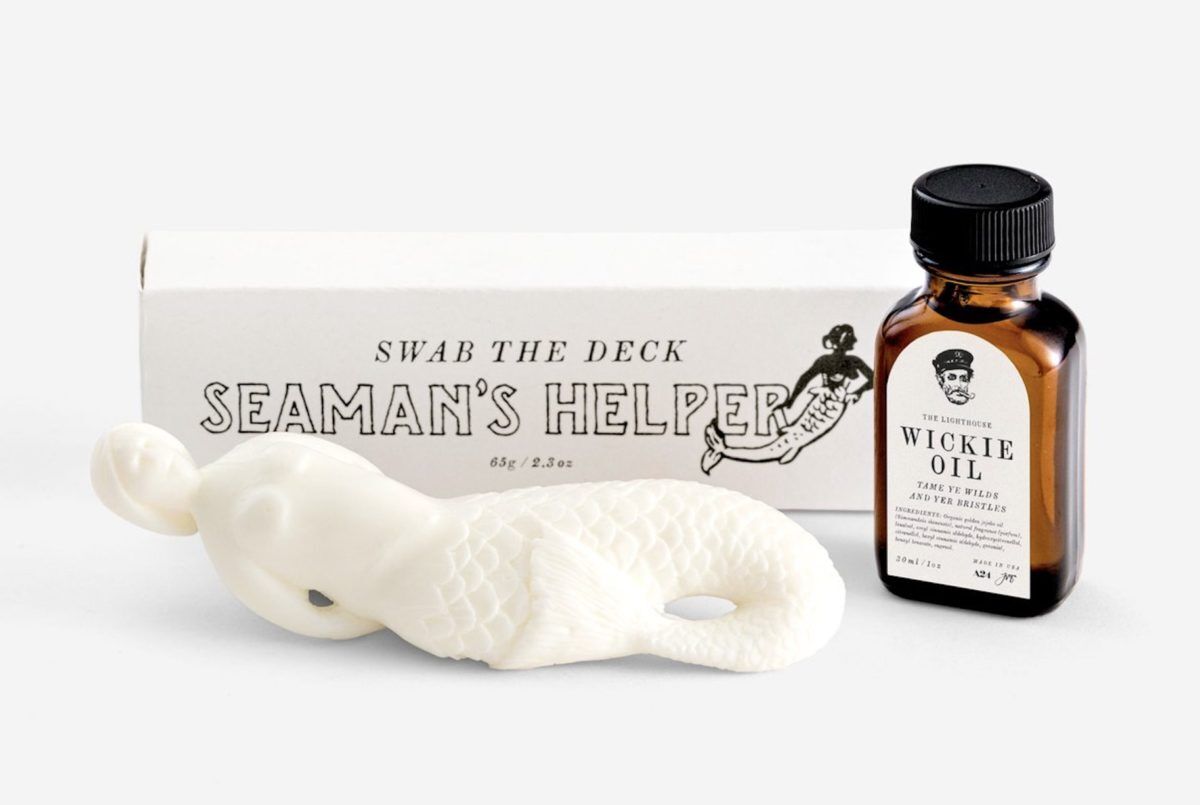 The 2019 film The Lighthouse stars Willem Dafoe and Robert Pattinson who portrays two lighthouse keepers attempting to stay sane while living on an isolated and mysterious New England island in the 1890s.

The lack of human interaction is no excuse for not washing up, swabbing the deck, and smelling your best.

For the film’s merch, A24 introduces a grooming set complete with scented beard oil and lathering soap. It tells the story of how he navigates through life as he begins spending time with older groups of skateboarders.

The official merch for Mid90s is a fingerboard that requires it to be assembled. It’s a great merch that really represents the film since it mostly revolves around skateboarding. Set in the autumn of 2002 through the fall of 2003 in Sacramento, California, it follows a high school senior and her strained relationship with her mother.

The merch for the film is embroidered patches are name tags that have an iron-on backing.

How You Can Benefit From Custom Embroidered Patches

What Is The Best Place To Find Custom Embroidered Patches?

Check out our custom embroidered patches. 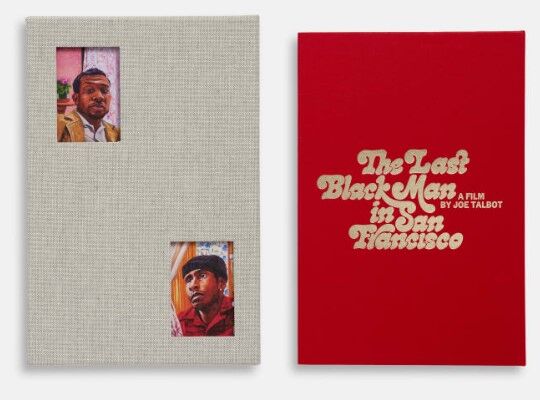 In 2019, the drama film titled The Black Man in San Francisco which was directed and produced by Joe Talbot was released.

It is based on the own Family story of the main character Jimmie, played by Jimmie Fails.

It follows Jimmie, who, together with his sympathetic best friend Montgomery, strives to recapture his grandfather’s Victorian mansion in the center of a quickly changing San Francisco.

For Talbot’s directorial debut, a special collector’s edition for the film was released.

It features artwork by Tajh Rust and includes a 62-page interior booklet. It also has a fold foil-stamped disc pack that comes with a wicotex-covered slipcase.

That’s it for the A24 films with their awesome merch. Each film really had its own cool merch that’s different from one another.

What’s great about this list is that aside from not one merch repeating is that they all can remind people of the film and its story.

These merch items are truly great examples of awesome and successful merch.

We’re almost halfway through October which means that Halloween is just around the corner. If you’re wondering how to add more fun to your holidays, I have here a list of horror movie merch that you will surely want to have or gift your loved ones who are crazy about horror movies. [ And if you […]