It is a known fact that CD sales have plummeted in the last decade and are down about 50 percent from their peak. The decline of CD sales — and, more recently, of DVD sales — has forced the music retailers to find other ways to fill their space and tap into customers’ interest in music. In order to survive, music specialty stores have to diversify. They have to sell something beyond recorded music.
Selling products beyond recorded music is nothing new for these retailers. Stores have routinely sold custom printed t-shirts and stickers for music bands, for instance. 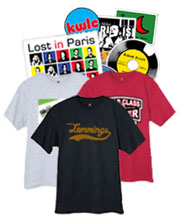 Jim Donio, president of the National Association of Recording Merchandisers, a trade group, said that specialized music retailers have diversified well beyond merely fiddling with their physical footprint. Many have altered the shape of their entire company and shifted into whole new areas of business. “These overarching strategic plans look at how a company can change the overall offering and still touch the music,” Mr. Donio said.
In 2008, Best Buy, the national electronics retailer, began dipping its toe into the world of musical instruments. By late March of this year, the company had opened its 99th and 100th musical instrument departments, at its new stores in Upper Manhattan and in Flushing, Queens.
At the store in Upper Manhattan, customers can select from 45 acoustic guitars, which are kept in a closed, climate-controlled room, ranging from a $99.99 Squier guitar to a $3,999.99, six-string Taylor. (And two ukuleles). Along the red wall facing the customers when they enter the department hang about 80 electric guitars and bass guitars, in a similar range of prices. DJ equipment lines another wall.
So far, said Candace Hoyte, a supervisor at the Manhattan store, the instruments have drawn a steady stream of attention, especially from children. They skip past the video game stations and head straight for the instruments, banging away at Roland electronic drums or tapping on one of the dozen or so keyboards, she said.
Best Buy’s shift into instruments is just one attempt at a solution. Other major music retailers, like Wal-Mart Stores, have simply shifted some of the space they used for CDs to other adjacent departments where sales remained brisk.
[NYTimes]
_______________________________________________________________________
Unified Manufacturing is an L.A. -based one-stop-shop that offers very affordable CD/DVD/USB replication, custom printing, promotional products, warehousing and fulfillment and many more. If you need an Instant Quote on a project and you want FREE SHIPPING, simply CLICK HERE.]]>

Last March 15, Technavio released their newest market research report which is related to vinyl records. The market research report is titled Vinyl Records by Product and Geography – Forecast and Analysis 2021-2025. The report shows the numbers post-COVID 19 which makes this very valuable. Inside the report are insights and information on how the […]

CD Packaging of the Week: Bosco-Spectrum

Artist: Bosco Album: Spectrum Label: The Big Up/Brittany Bosco Designers: Alex Goose & Branden Collins Year: 2008 Info: Alex Goose: Designed as a promotional EP with little to no budget, Branden and I had to come up with a package design that would immediately catch anybody’s eye. As part of The Big Up!, we not […]