Vinyl record is one of the most beloved physical audio formats to ever grace the Earth with its presence.

Many people have been collecting them for decades while more are falling in love with them. Enough that a so-called “comeback” of the format occurred as its sales increased year by year.

But what is the history of the greatest physical audio format? Where did it come from? How did it come to existence?

Thomas Edison and His Tinfoil Phonograph 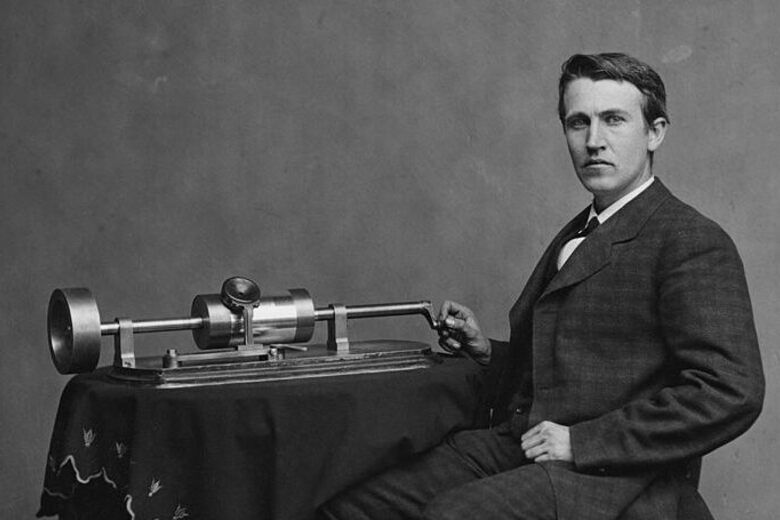 Before Edison tried to create his phonograph in 1878, we have Édouard-Léon Scott with his phonautograph in 1857.

The phonautograph is a device with a cone that receives the sound and a pen at the end of the smaller opening which transcribes soundwaves onto glass or smoke-blackened paper.

There was already a way to record sound thanks to Scott, however there was no way to replay them after recording. This is where Thomas Edison enters with his phonograph, a player that uses a needle or stylus to cut and read grooves on and of a tinfoil rolled on a cylinder.

We have the first ever recorded song “Yankee Doodle” played by cornetist Jules Levy when the musician participated in Thomas Edison’s early public demonstration of the phonograph.

After the tinfoil phonograph was viewed as a promising technology, people tried the same concept on disc records instead of cylinder ones. Manufacturers had varying materials used to make these 78 rpm disc records.

Most of them used different combinations of some of these materials: shellac-based material, mineral fillers, black carbon. Some have even used hard rubber to produce these disc records. However, these discs easily degrade and are fragile.

To surpass this disc disadvantage, Edison introduced the Blue Amberol Records in 1908. It’s a cylinder record made from plastic, lessening its fragility. But even with all that improvement, discs still won this war. And after the patent for the lathe cut discs expired, many record labels grabbed the chance to improve them. 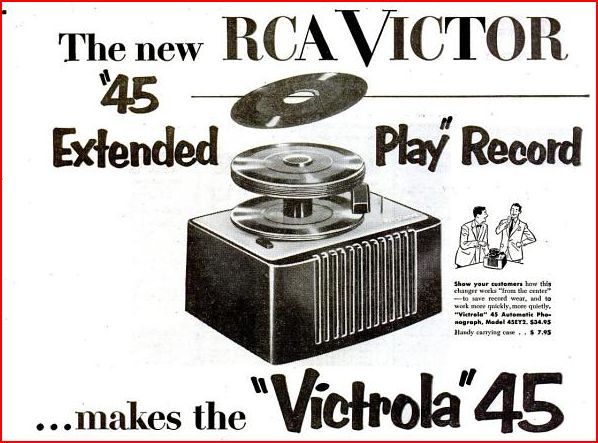 RCA Victor, currently known as RCA Records, was the first record label to release the first ever commercially available 33⅓  rpm vinyl plastic-based records. They released it in September of 1931 and named them “Program Transcriptions”. This, however, failed to sell mostly because of the Victrola players that were highly priced.

In the early 1940’s, Columbia Records stepped up and continued developing the disc records with Dr. Peter Goldmark’s as manager of the team. They experimented with groove widths, higher fidelity recordings and longer masters to achieve an inexpensive and light record that produces better playback. Fortunately, they were successful which led to the release of LP’s or long plays in 1948.

RCA, unable to accept Columbia’s system, released their 7 inch vinyl records ( 45 rpm single) records to the public. This became the standard which pushed Columbia’s ZLP, a 7 inch 33⅓ rpm vinyl record single with microgrooves, out of the picture. 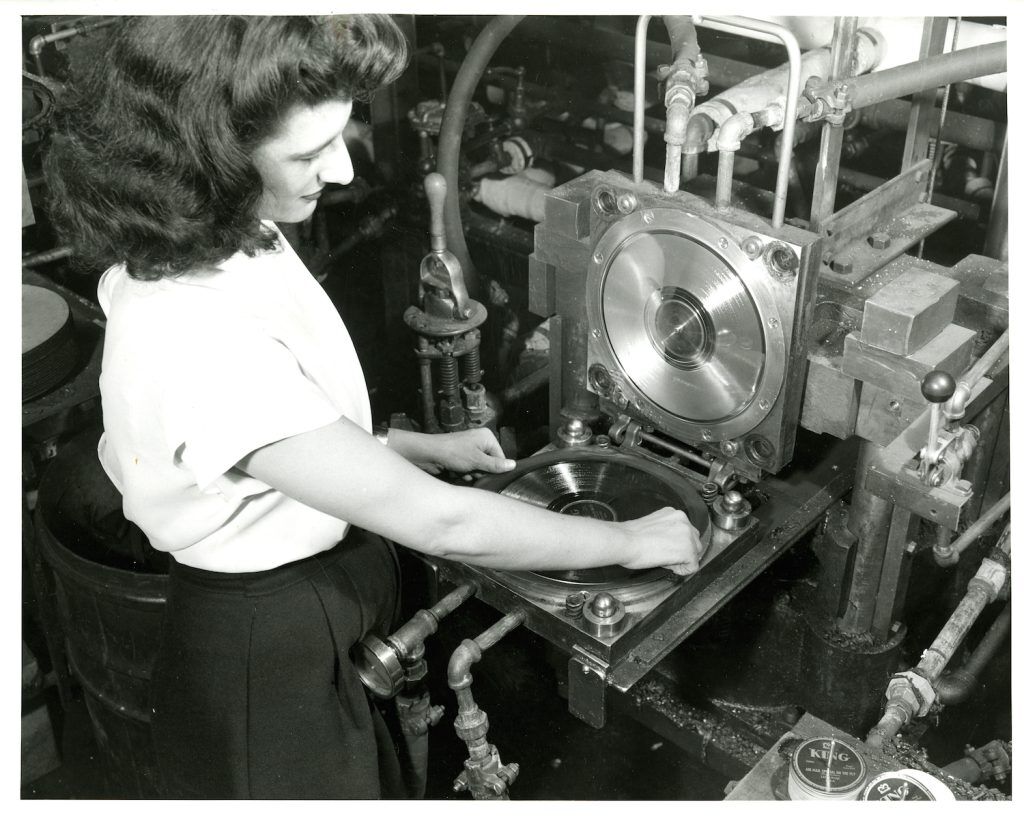 The 10-inch vinyl long play first made it’s appearance in the U.S. in 1947 with a very few releases – well less than 50 that year that made it prominently into American homes – But it was definitely an innovation permitting records companies to typically place 6 to about 8 tracks on a record for the first time – packaged in a nice compact (and sometimes attractive) cover.

Most Americans possessed – if at all – only a 78 RPM record player – and for the deep South and South in general – and black migrants to the North – that would remain the case for most of the 1950’s.  So the innovations in vinyl size would have to be gradual and improve as the economy improved during that decade following the restrictions of World War II.

Columbia was nearly the sole provider of 10-inch LP’s during that first year but would soon be challenged in 1949 by Decca when the number of releases more than tripled.  Very few genuine rock and roll acts appeared in this format.  The adult record buying public supported these early 10-inch long plays  – The advent of the 45 format both in singles and extended play – opened up the market to the Baby Boom generation who were coming into a better fiscal standing (as their little big older siblings – who first supported rock and roll – already were enjoying).

Production then exploded in 1950 and continued well into 1954 but then began to level off with the increased production of the 12-inch format (which was also introduced in 1948) which provided more fidelity and increased capacity.

Production then exploded in 1950 and continued well into 1954 but then began to level off with the increased production of the 12-inch vinyl record (which was also introduced in 1948) which provided more fidelity and increased capacity.  By 1954 the larger format had overtaken the 10-inch vinyl record. 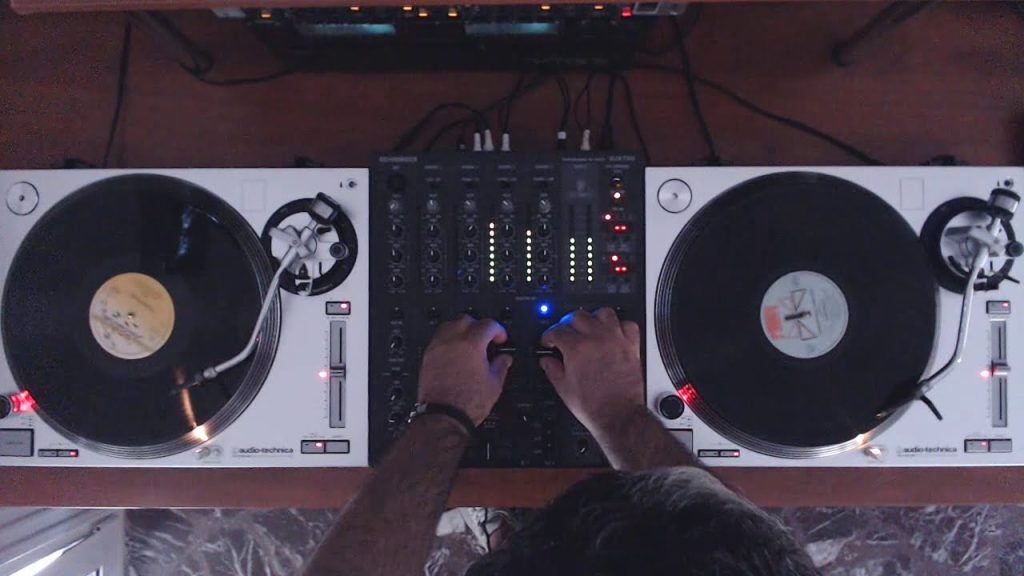 For decades, the vinyl record has been the reigning audio format in the music scene. Even with other formats released like cassette tapes, no format ever kicked it out of its throne. But upon Sony’s creation of compact discs, more commonly known as CDs, the vinyl records were surpassed.

The convenience, lightness, durability, and inexpensiveness of the compact disc was one of the main reasons why they prospered in the 1980’s. CDs were able to play people’s favorite music without any pops, surface noise, and more, which was very favorable for many.

And so for the first time, vinyl records were rarely seen on shop shelves. 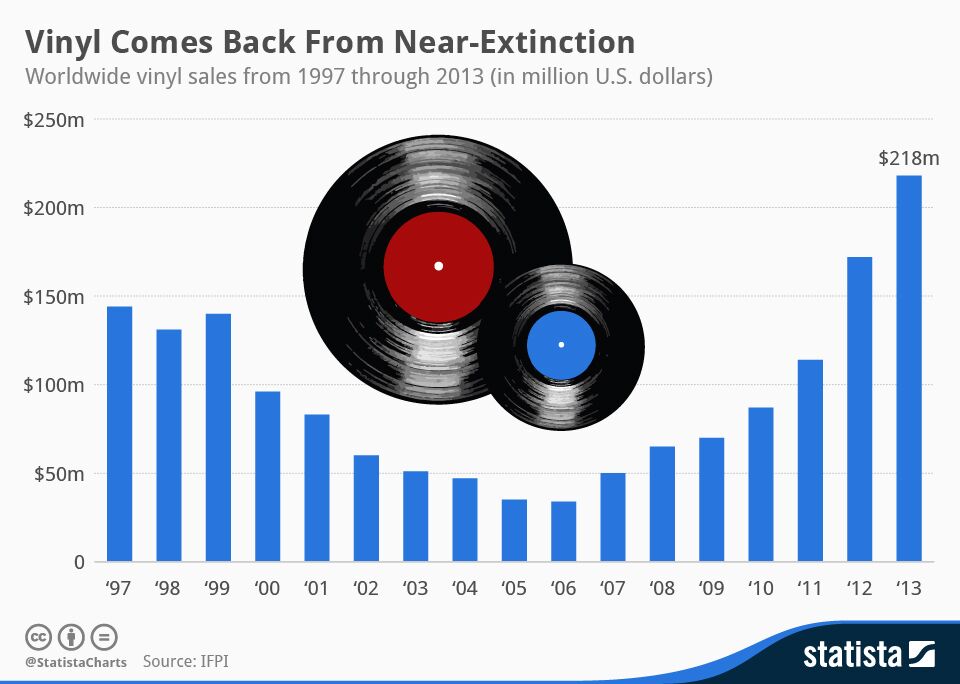 Though CDs were selling so well after being the standard audio format, vinyl records were still selling and contributing to overall music revenues.

Recording Industry Association of America (RIAA) has data revealing vinyl records still contributing 10 million to 40 million dollars in music revenues in the US. And according to the same data set, 2008 was the year the vinyl format’s sales showed growth for the longest time.

After 2008, vinyl sales continued to increase resulting in the “vinyl comeback” many vinyl enthusiasts have been waiting for. An explanation for this may be the emergence of custom vinyl records which makes them more interesting than before. 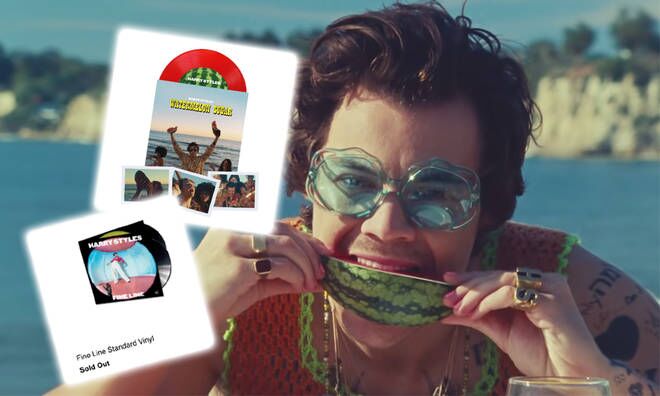 The “vinyl comeback” does not end there because just last year, vinyl sales in the US officially surpassed US’ declining CD sales for the first time after 34 years. According to the RIAA, vinyl sales amounted to $619.8 million which shows a forty six percent increase from its previous year, 2019.

And with its increasing audience, artists have come to take advantage and are releasing on custom vinyl records. Moreover, pressing plants, like Unified MFG, are offering short run vinyl record pressings, where you can order vinyl pressing for 100 copies or less.

Here! Sod and Prompt Design made aircraft-like T-Shirt packaging which its surprisingly ‘red wings’ that actually is a cloth hanger makes outstanding identity to Air Asia. This fresh idea of Here! Sod T-Shirt had won Gold Award from Pentawards. From fresh idea of Here! Sod brand, introducing T-Shirt that makes fame from different angles by […]

To commemorate its 15th anniversary, Lamb of God has given its fans a vast array of options billed as the Hourglass collections. And for its most ravenous fans, the band conceived quite possibly the most metal thing ever — a personalized casket. Unlike KISS’s casket wherein it can be doubled as a beverage cooler, Lamb […]