Johnny Cupcakes, the “world’s first t-shirt bakery”, is one of the t-shirt retail companies that we’re really fond of because they sell the quirkiest t-shirt concept and t-shirt packaging. These guys know branding!

Packaging for their T-shirts have included a cupcake box, an ice cream carton, push up popsicle package, takeout Chinese food container, fake VCR case, playing cards box…you get the idea. He’s been known to write personal notes on orders or even randomly include batteries or a doll’s head in the box. Yes, a doll’s head. He views each order as an experience for the customer, and the packaging is a big driver of that experience. Earle’s believes that customers talk about these kind of strange experiences and become evangelists of his brand.

Here are some of the yummiest food inspired t-shirt packaging from Johnny Cupcakes and Junk Food Clothing. If you want to copy them and make really awesome tees with really awesome packaging, we’re here to help! Anyway, dig in.

Imagine hearing an ice cream truck, you head out and realize that yes, indeed, it is an ice cream truck but instead of selling ice cream, they’re selling custom t-shirts printing near you! Well, now you gotta buy those tees then! Definitely on the EXTRA side but that’s what makes people want to buy it. 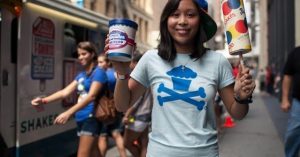 This is the kind of marketing that makes the brand win. They’re selling tees that actually helps their brand! How great is that? It’s like people are paying them to become even more famous!

This ice lolly is paired with the pint ice cream above so there’s more options for these frozen delights. Which one do you like more? If you’re not into ice cream because you got We here at Unified are obsessed with beautiful packaging. We’ve been making creative releases since 2008 and lovely packaging has become an obsession of ours. We even have a Pinterest page dedicated to all things media packaging. If you want to make a cool t-shirt with a really badass t-shirt packaging, get a quote or shoot us an email.

Vinyl Manufacturing: Vinyl is too wonderful of a medium to die

Why should an indie band put their album on vinyl? It’s the coolest format.not everyone can have access to it.if you don’t want your music to go everywhere,it’s one way of having control over your product. Will vinyl ever die? “No. Absolutely not. It’s too wonderful of a medium.” says Thomas Bernich, owner of a […]