Viral marketing campaigns use mystery, fun, and often, deception to help create buzz for a new product. Sometimes such campaigns succeed; sometimes they backfire. Let’s take a look at these cases and try to see what they did right and wrong. 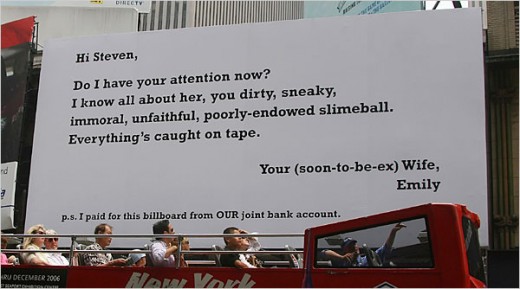 “Hi Steven,” it began, cheerily enough. “Do I have your attention now? I know all about her, you dirty, sneaky, immoral, unfaithful, poorly endowed slimeball. Everything’s caught on tape. Your (soon-to-be-ex) Wife, Emily.”

This is a vengeful Dear John letter, blown up on a billboard in the middle of Manhattan by a furious and apparently deep-pocketed spouse.

More than a million people visited the Emily blog afterward. A fake surveillance video on the blog, supposedly from a private eye capturing Steven holding hands with his paramour, hit YouTube and became one of its most-viewed videos.

The good: most of the people felt deceived by the campaign but most of them say they don’t mind. 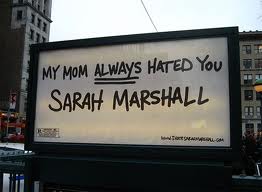 Do you remember the “Forgetting Sarah Marshall” campaign 2 years ago? There was a series of snarky, hand-scrawled advertisements on the sides of buses, subway platforms and telephone booths that targeted somebody named Sarah Marshall. Months before the release of the film, viral marketers put up a series of cryptic advertisements and started a blog, Ihatesarahmarshall.com, which purports to be the actual blog of Sarah’s bitter ex-boyfriend, Peter Bretter.

The bad: Well, it’s really not that bad (actually, it’s still good for the film’s publicity). It’s just that a girl named Sarah Marshall from Glendora complained. “They’re everywhere, and they’re so annoying,” said Sarah, who lives three blocks from one of the billboards. Adults called her parents to ask if she was the target of a hate campaign. “I wish they specified that it’s a movie,” she said. 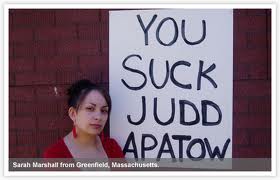 Look at that. It’s just like an old polaroid photo from your mom’s treasure box. This CD packaging for Vampire Weekend’s Contra created a buzz. The polaroid photo of this anonymous woman was seen everywhere- in their concerts, their website, everywhere! They want people to get intrigued by their effortless  album artwork.

The Ugly: This is actually a picture of 80-90s image model Ann Kirsten Kennis and ,apparently, the band used it without permission. Kennis was flattered at first but then she realized how improper it is for the band to use her picture.“Who do these people think they are that they can just take my picture from god only knows where and plaster it everywhere?”. A $2 million misappropriation-of-image lawsuit in Los Angeles against Vampire Weekend, Tod Brody, and the band’s London-based label, XL Recordings.

CD Jewel cases are considered as passé —a thing of the past. Everyone today wants to release in digipaks and fancy packaging and if they do release in a CD jewel case, they often overcompensate in the CD artwork. But the jewel case is actually one kickass CD packaging if paired with a brilliant concept. […]