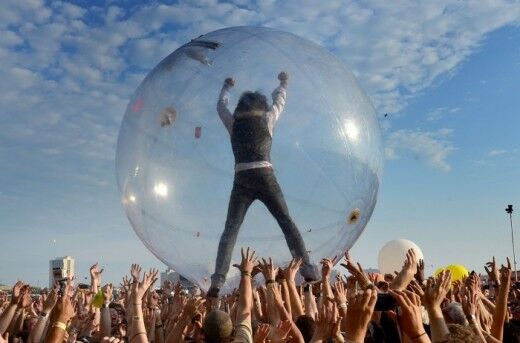 Whether you like it or not, gimmicks play a big part in the music industry. We’ve said over and over that a career in music requires more than talent- it requires good branding (which could include the gimmicks), winning traits and 10,000 other things. A gimmick is a strategic stunt or look that makes people pay attention and talk. It could be as flashy as Flaming Lips rolling in a human-sized hamsterball or as simple as giving away limited-edition newspapers. Anyway, we put together some gimmicks made by famous musicians: 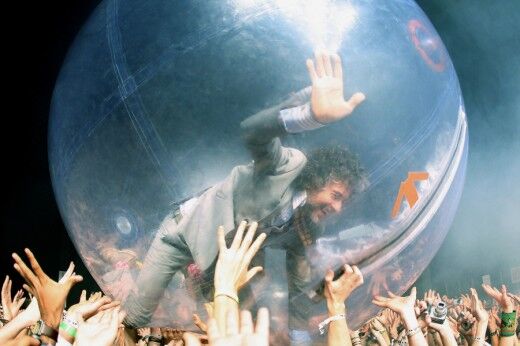 The “Lips” make good music AND they are also known for their shocking, one-of a kind gimmicks– from putting blood of famous artists on the album packaging to releasing a six-hour song (I know). During their concerts, Coyne maneuvers atop the audience, surfing in a giant hamster ball. He really seems to be enjoying himself rolling in this ball while the fans go wild. BUT, warning to new artists, you really have to be famous before you can do this or else you’re more prone to getting yourself into an embarrassing situation. 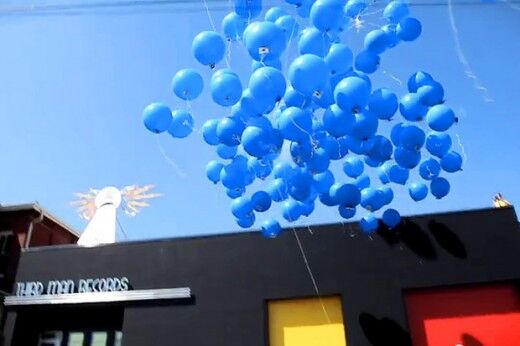 Jack White released a limited-edition single by helium balloon from his Third Man Records label headquarters in Nashville. The track is “Freedom at 21”. White and colleagues at Third Man filled 1,000 blue balloons approximately two feet in diameter with helium, attached flexi-discs and released them into the sky. 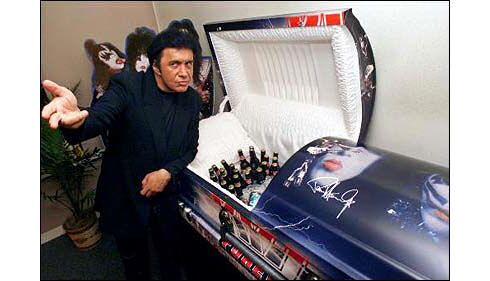 We know KISS wouldn’t be KISS without their make-up and crazy merch. Their faces are everywhere from breakfast cereals to coffins. Yep, this one is a real coffin folks. What a practical item to buy, right? As long as you’re alive, it would serve as beverage container or a perfect hiding place if you want to shut off the world. It’s a good way to go in style, eh?

Getting Naked and Asking Fans to Write on Body- Amanda Palmer 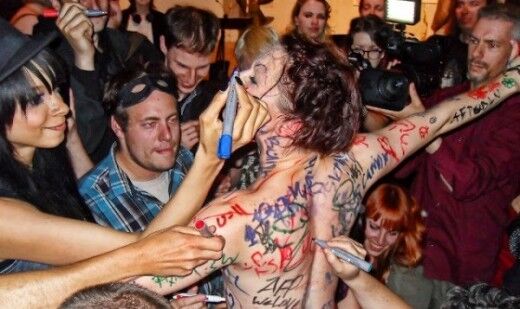 As a thank you to the fans who supported her in the Crowdfunding campaign, Amanda Palmer got naked surrounded by about 250 people and said: “I trust you, come close and paint on me”. Amanda’s one of the female artists who sure knows how to leverage their career using their bodies. No wonder she wrote this letter to  Sinead re Miley’s stripping in her music video.

Honesty Box or “pay whatever amount for our music”- Radiohead 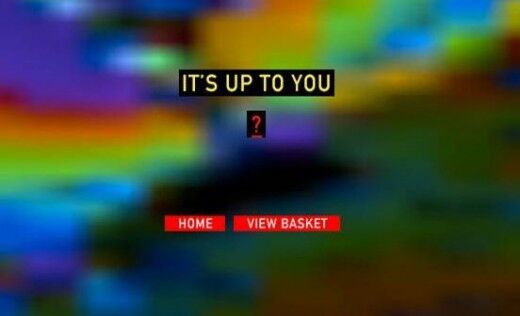 ‘In Rainbows’ was made available online in 2007, with fans able to pay whatever they think the music is worth. One third of the downloaders did not pay a single cent but the ensuing hype and publicity led to ‘In Rainbows’ being the most profitable album of Radiohead’s career.

What do you think of gimmicks? Are you for them or against them?

Here are the nominees for the 57th Grammy Awards for best Special Edition music package. Tell us which CD packaging you like best because it’s pretty hard to pick a favorite! They’re all worthy of an award. CITIES OF DARKSCORCH Leland Meiners & Ken Shipley, art directors (Various Artists) Label: The Numero Group Cities of Darkscorch is […]

CD Packaging: Mark Fry/The A. Lords – I Lived In Trees

The CD packaging of Mark Fry’s “I Lived in Trees” album comes with a packet of Rowan tree seeds. How awesome is that! Since their title is “I lived in trees”, then they must’ve thought ‘hey, why not give away seeds?’. Seeds don’t cost a lot but they’d make as hip giveaways. Clever! I wish […]