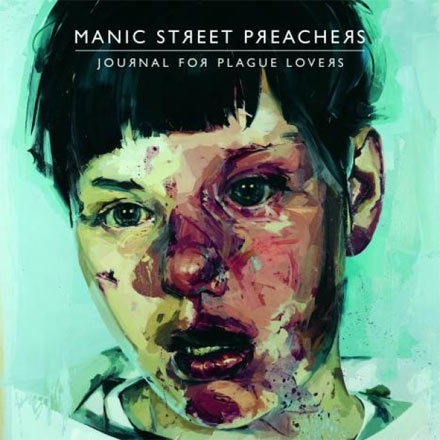 Album: Journal for Plague Lovers Musician: Manic Street Preachers Visual Artist: Jenny Saville Year: 2009 “Females are used to being looked at”says British artist Jenny Saville. As one of the most successful painters of the last two decades, Saville has kept her gaze firmly on the female form. She made her name with large-scale paintings of almost grotesquely fleshy women. The obsession started during her studies at the University of Cincinnati, where she encountered: “Lots of big women. Big white flesh in shorts and T-shirts.” 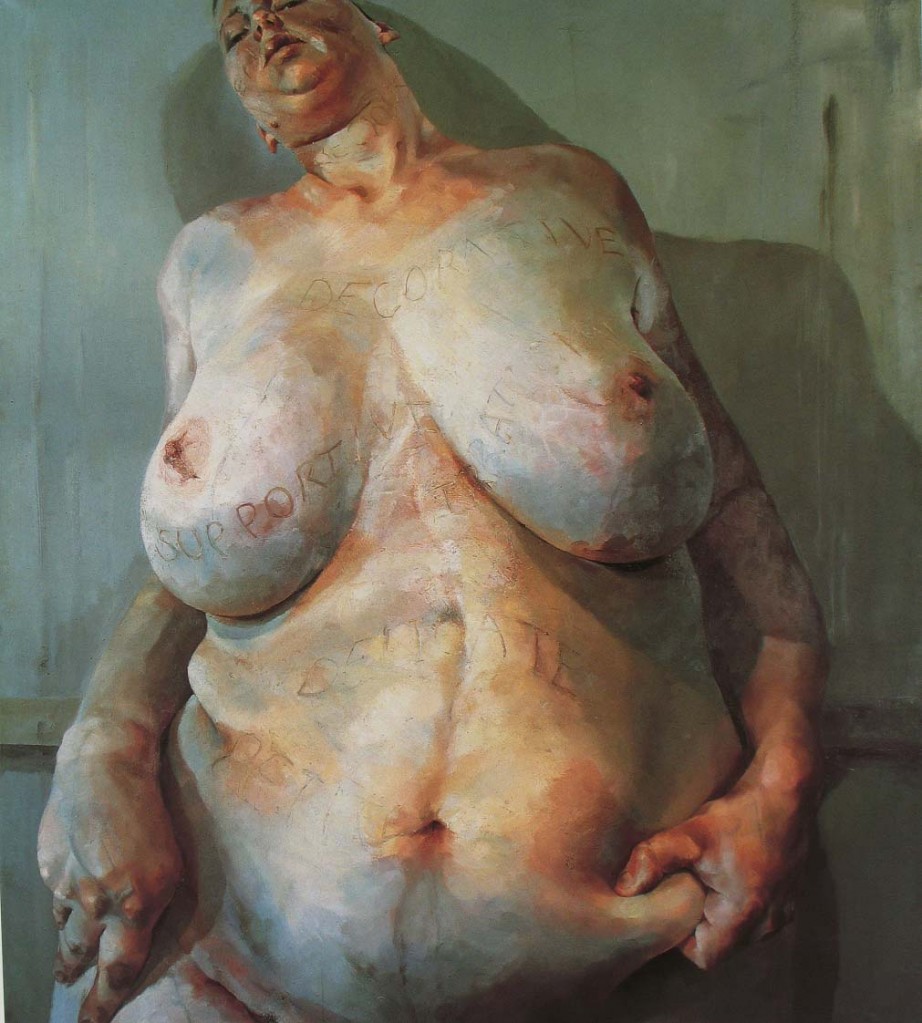 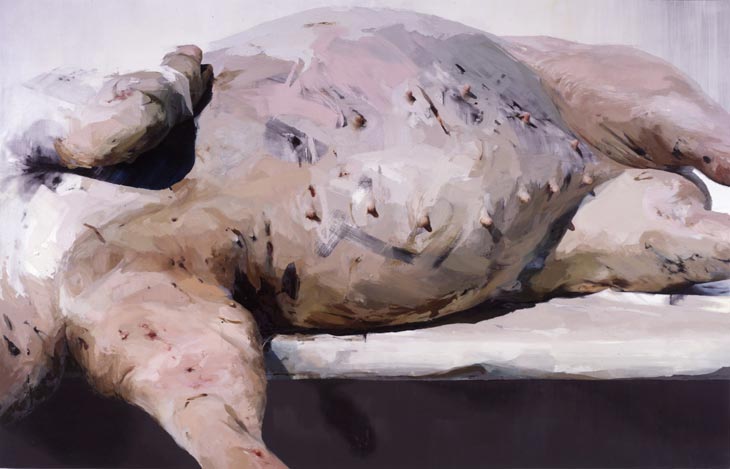 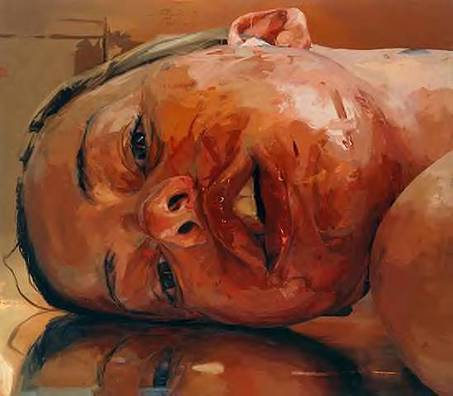 The Manic Street Preachers are long-time fans of Saville’s work, having used her painting Strategy on the cover of their third album, 1994’s The Holy Bible. 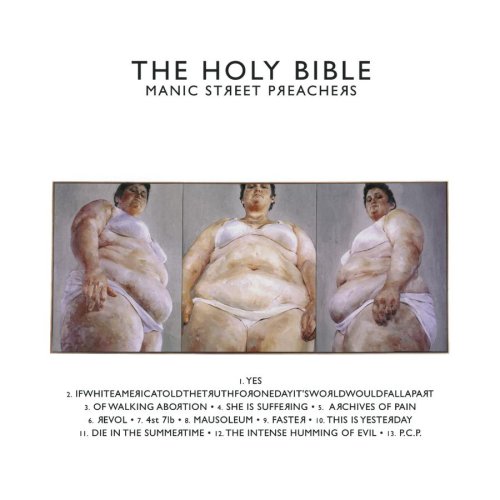 At that time Richey Edwards was still the band’s lyricist, while Saville was one of the bright stars of the “Young British Artist” movement. Edwards disappeared mysteriously in 1995 and was only declared “presumed deceased” in November 2008. 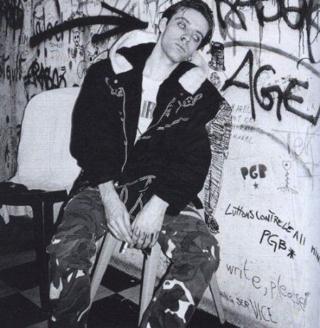 Journal for Plague Lovers, Manic Street Preachers’ ninth album, is comprised entirely of lyrics that he left behind. Explaining the tribute on their official website, the band said that all “13 songs on the new record feature lyrics left to us by Richey. The brilliance and intelligence of the lyrics dictated that we had to finally use them.”

The band also felt compelled to use Saville’s 2005 painting Stare for the cover. Frontman Jame Dean Bradfield told BBC “We just thought it was a beautiful painting. We were all in total agreement. We just saw a much more modern version of Lucian Freud-esque brushstrokes.” 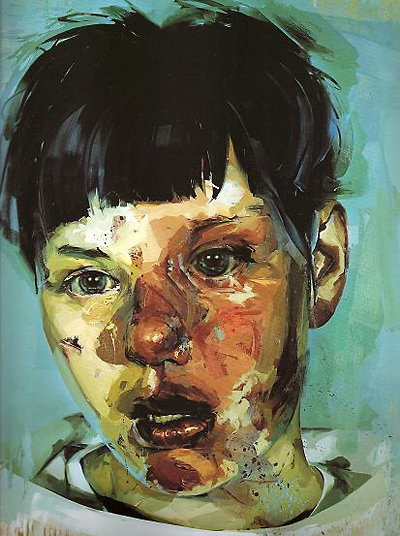 Inspired by a newspaper cutting, the painting depicts an androgynous girl with a large birthmark on her face. But when presented with the image on a CD cover, Britain’s main supermarket chains saw something else entirely. Thinking that the image depicted a young guy with a bloodied face, they deemed the cover “inappropriate” and refused to carry the album unless it was shipped in a plain slipcover. Nicola Williamson, Sainsbury’s music buyer, said: “We felt that some customers might consider this particular album cover to be inappropriate if it were prominently displayed on the shelf.” Having unwittingly contributed a new entry into the pantheon of banned album covers, Bradfield described the situation as “utterly bizarre”. “You can have lovely shiny buttocks and guns everywhere in the supermarket on covers of magazines and CDs, but you show a piece of art and people just freak out,” he said. “A large female body has a power, it occupies a physical space, yet there’s an anxiety about it.” Saville once said of her art, “It has to be hidden.” Many are distressed that the same seems to be the case for a disfigured tomboy. Journal for Plague Lovers may have been the most controversial cover of 2009, having accidentally sparked a dialogue about art, the body and censorship. You’d like to think that Richey Edwards, known for his highly political songwriting, is smiling somewhere. This article was first featured in Monster Children Magazine ___________________________________________________________________ Unified Manufacturing is an L.A. -based one-stop-shop that offers very affordable CD/DVD/USB replication, custom printing, promotional products, warehousing and fulfillment and many more. If you need an Instant Quote on a project and you want FREE SHIPPING, simply CLICK HERE. ]]>

Branding and Reputation Tips for Artists

You might think only companies need branding but branding simply means your image. It’s how you look, act, talk. It’s your aura, your smell, your opinions… your you-ness that sticks to people’s minds. Therefore, all of us have a brand. When you’re starting a career, any career, it is important to take care of your […]

Make the film you and your talent want to make. Inherent in that is finding talent who wants to make the film you have in mind, and making that talent very happy to be working with you on your project.  A good name makes for great marketing, and often name talent has got a following […]