Music is dying if you believe the RIAA (Recording Industry Association of America).

Music is a growing business if you believe Apple, Google, Spotify, Yahoo Music, Artist Direct, My Space Music, Pandora and hundreds of other options.

They’re right – all of them.

The ‘good ol days’ are gone.

Everything lives in phases – music is no different:

Sure, Warner Music is up for grabs but the buzzards see a feast in the carcass- a library that’s worth gazillions.

Buddy Holly, The Big Bopper, Ritchie Valens were killed in a plane crash in ’59 and everyone called it the day the music died.

For Elvis fans there was a similar feeling.

It turns out the royalties to their estates and older artists may have been reborn with the Eminem’s decision against Universal that digital sales are licensed royalties not out-in-out sales.

While the industry (RIAA) is trying to revive its collective income, the ruling made them step back a little.

Buddy commented, ‘I have never, ever-it feels funny to me.’ 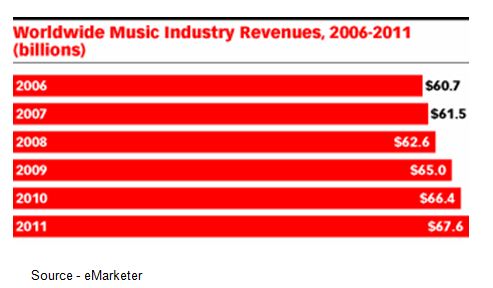 Yes But – The music industry reluctantly admits that music sales ” of all types ” continues to rise but the old way of stamping a disc, shrink-wrapping it and sending it to the store is dwindling.  The RIAA members just can’t figure out how they’re going to make the same amount on the digital sales and streaming music.  Source – eMarketer

It’s true, the guys aren’t stamping out, shrink wrapping, shipping as many albums, but the music plays on.

Tracking the Mix – While physical media sales continue to drop, single and album sales have begun to level off to a more modest/realistic growth.  The newest opportunity, mobile music, is still trying to gain its foothold.  Source – eMarketer

How else would the labels have the money to chase down and shut down all those bad kids?

When the RIAA got the courts to shut down Limewire in October of last year — the largest P2P site — file-sharing dropped like a rock.

Maria Elena emphasized, ‘My aunt is very conscious of these things.’

NPD noted that the site was so popular for so long that when it disappeared people just figured that was the end of the free stuff.

Sure, hard-core freeloaders still hang out at sites like Frostwire and Bittorrent; but they’d work at getting it for nothing, no matter how little you charged.

Normal humans moved on to other methods of getting/listening to music.

Digital sales were up a paltry one percent in 2010, but music sales overall were down 2.4 percent.

Are people giving up music?

Home audio sales are up – nearly every car is sold with a radio – portable speakers are up – Skullcandy and Bose are enjoying great headphone, earbud sales. 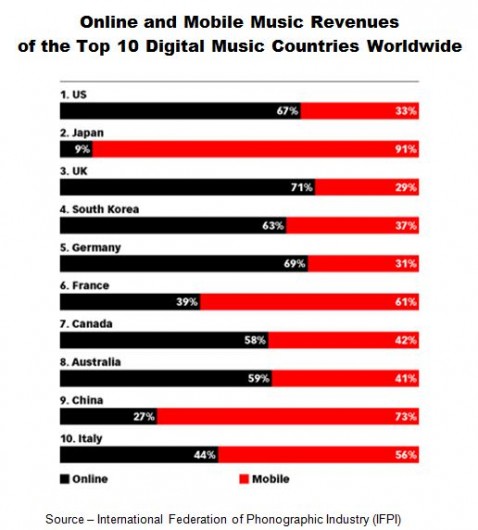 Balancing Act – While their choice of listening device might vary from country to country, people all have the same desire to listen to music to make their day go better.  But online or mobile, it’s still music.  Source – International Federation of Phonographic Industry (IFPI)

Of course our kid won’t rip the 4K + CDs we no longer play.  Not because it’s ‘illegal’ (does that stop a kid?) but, ‘OMG, you know how long that would take me?’

But the times have again changed.

We find ourselves listening to iNet radio.

People around the globe go online and listen to web radio or online services. 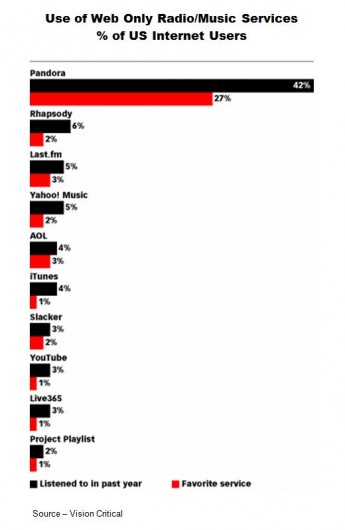 Web-centric Music – Whether it’s Pandora, I Heart Radio, Rhapsody or Yahoo! Music, people are able to use the Internet to enjoy the specific genre of music they prefer and enjoy.  Often it is music that suits their mood, feelings at that specific time. Source – Vision Critical

One of our kids uses her iPod Touch to text, download/store/enjoy music.

She can store her stuff in Apple’s cloud but keeps most of her music on her device.  Unfortunately, playing that music on something else is impossible because Apple uses the AAC (Advanced Audio Coding) format.

The son and his friends don’t mind, they’ve moved on to the next big thing-streaming

Streaming will grow at the rate of 95 percent over the next six years and, according to ABI Research, is going to ‘explode.’ 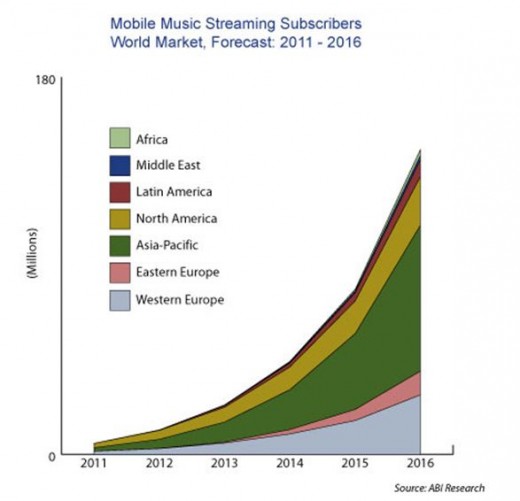 Streaming Explodes – While the number of streaming music subscribers won’t knock you back on your heels, it does look impressive when you graph it out using just the right scale.  Streaming will gain momentum as people move from the need to ‘own’ the music to simply enjoying it in the here and now.  Source – ABI Research

By 2016, they say streaming will have more than 161 million subscribers.

But keep in mind that the planet has more than 7 billion people, so that’s a pretty small explosion.

While the RIAA sues their fans, the artists talk to them – seems to work better.

The industry knows their future is in the cloud.  They just can’t figure out how they make the same amount of money.

The new purveyors say the label’s problem is greed, stupidity (or more kindly, shortsightedness), bad will.

The problem is everyone has a silo mentality.

Someone has to tell ’em, ‘Folks it ain’t workin!’

People are finding new ways to listen to their content and they like it.  They don’t want eight songs wrapped around the two they really want-they want the specific songs.

It’s not just a bunch of the content; it’s the listeners’ experience.

Studios have to understand musicians like reaching out, delivering the experience, making a living.

Maria Elena emphasized, ‘Just take my word for it.’

It means labels and the rest have to figure out licensing agreements that are best for everyone – including the listener.

The consumer simply doesn’t care about ‘them.’  They want to listen to music that is relevant right now on the device they have at the time.

They need to agree on something that works for the artist and the consumer – regardless of the platform or device.

We don’t care how the services compensate each other whether we buy it, rent it or stream it.

Don’t like it?  Remember what Buddy said at the end of his last concert, ‘Thank you, Clearlake! C’mon… we love you, we’ll see you next year.’ 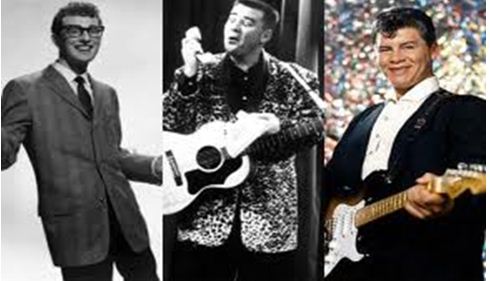 Legend Power – While some music fades in only a few months or years, there are musicians whose songs live on years after their death.  In some instances, their music becomes increasingly popular over the years.

The music will live on.

Vinyl Manufacturing: How Vinyl Records are Made (Video)

Vinyl is back! Actually, it never went out of style because it’s too wonderful of a medium to die. The 1960s is the golden age of vinyl. In the 80’s CDs hit the market and people start to prefer the convenience of CDs. A decade later when computer downloads enter the scene, it seems that […]

Our Top Advice Articles for Musicians

1. If you want to make a career out of your music, you should know how to brand yourself as a musician.

2. There are more important things to deal with (making music!) than annoying band mates. Here are clever ways to confront a difficult band member.

3. You need other bands. All of us need to push each other to the top. Going to the top alone could be daunting and lonely. Learn how to make friends with other bands without looking desperate.