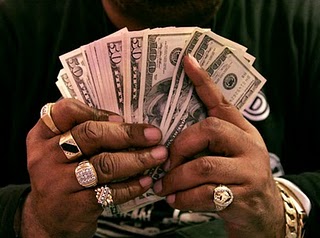 Creative artists, more than any other personality type, have a strong orientation towards authenticity.  They can smell trickery and b.s. from a mile away.  Ask them to write out a list of their least favorite people in the world and you’ll likely find politicians, and people who’ve achieved outward success through slimy tactics.  One group in particular that often finds itself on the other end of the righteous contempt of the musician are those known as salespeople.  Slimy, conniving, dishonest,  terrible, evil, ugly salespeople.

It’s no wonder why so many musicians are so bad at selling.  It’s my contention that a high percentage of independent artists harbor negative feelings about selling and disempowering beliefs about money.  Often, musicians unconsciously avoid doing things that would make them money because they don’t like the way that it feels to sell.  It’s as if by becoming good at selling their music and products they’d have to, on some level, identify themselves in the same category as a sneaky, soulless, greedy salesperson who’s just out to make a buck.  Most seem to be OK with the idea of selling music and merch, just so long as they’re not the ones doing the actual selling.

What I’m here to say is that it’s time to examine some of this unconscious association and to take a good look at your own beliefs and how they affect you.  How do you feel when you try to sell your music or tickets to a show?  How do you feel when you tell people about the merch that you have for sale when you’re on stage?  Are you spending time and effort on being able to sell more effectively or would you rather avoid it?

You can be extremely talented and do a lot of things right, but if you’re holding onto a subconscious belief that you’re somehow being wrong by selling yourself and your product then you’re going to be fighting yourself the whole way.  You’ll keep trying to find the elusive ‘next step’ and you’ll never really be sure why you’re not making as much progress as you feel like you should.

So aside from all the judgements and past experiences and projections, what is sales, really?  Well essentially it’s just bridging the gap between people and the things that they want or need.  Nothing wrong with that, right?  Our perception is often spoiled by entry level salespeople in mediocre retail outlets.  Good sales people are excellent listeners.  Good salespeople actually care about their customers and look to take care of them and their needs.  It’s an honorable and fulfilling profession when done with the right spirit.

Virtually all public performing musicians are salespeople whether they realize it or not.  What I’d like to see is more of them becoming GOOD sales people who deliver value fairly and profit from it without apology.  Do your fans want shirts with your logo on them?  Then have them printed up and sell them!  Would your fans gladly pay $5 extra for autographed CDs?  Do it!

If you’re playing a show where you get to keep 100% of the door, then charge a fair price.  I’d glady pay $10 or $15 for a good show and contribute to a band that I like rather than get in for free and see a band I like flounder around and die a slow and painful death over the course of the next five years because they never have any money to do anything.  Your fans want to see you succeed and they want to be a part of getting you there.  Don’t let them down by selling yourself short.

It’s naive to think that it would be easy to reverse a lifetime of programming, associations and feelings that you may have in the area of sales and money.  The key though is that once you become aware of something unconscious that’s not serving you, you can begin to do something about it.  Personally I had to, against all likelihood, actually become a sales person to change my own beliefs.  You might want to pick up a copy of “Secrets of the Millionaire Mind” by T. Harv Eker if you want to dig in deeper and find ways to take control of your beliefs and habits in this area.

Once you can let go of some of the negative stigma that surrounds sales and money you’ll start to see a lot more opportunity around you.  Go get it!  Make some money.  It’s OK!  You know that quick little speech you give about the stuff you’ve got for sale in the back?  Make it better.  Rehearse it.  It’s OK – you’re allowed to do that!  Find ways to display your merch more attractively.  Ask your fans what they’d like to buy from you.  Then make it happen and charge a fair price.  Keep track of how you do and keep looking for ways to improve sales.

Money is good.  Get comfortable with it.  Be grateful for it.  It’s yours.  Go get it.

Stefan Sagmeister is a world-renowned design icon and definitely one of our favorite. His designs are very modern, witty, humorous, and bold-just what we are looking for in a design. He has received a lot of rewards including his design for David Byrne and Brian Eno’s Everything That Happens Will Happen Today. Here, the design […]

CD Packaging: Which Type of Packaging Suits My Project?

Sure you can place your CD or DVD in any packaging that you like- if you’re not going to distribute it. But if your project is for mass distribution-say if you’ll use it as a marketing tool, a product demo, etc- then you better know what type of packaging is appropriate for it. Music Demo […]