A CD is a short term for compact disc and was originally invented to store digital sound recordings exclusively.  Later, it was also used to store other types of digital data like images, documents, and the like. Until today, it remains the industry’s standard for storing and preserving audio.

The CD was planned to be the successor of the gramophone record for playing music, rather than primarily as a data storage medium. Only later did the concept of an “audio file” arise, and its generalization to a data file. From its origins as a musical format, CDs have grown to encompass other applications.

September 1978- Sony demonstrated an optical digital audio disc with a 150 minute playing time, and with specifications of 44,056 Hz sampling rate, 16-bit linear resolution, cross-interleaved error correction code, that were similar to those of the Compact Disc introduced in 1982. 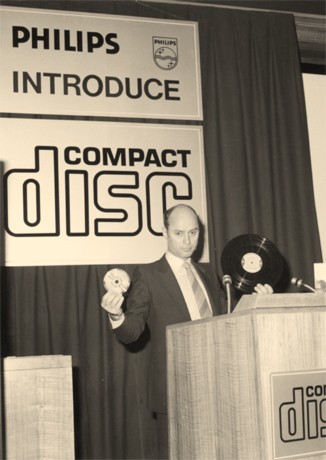 1979- Later that year, Sony and Philips Consumer Electronics (Philips) set up a joint task force of engineers to design a new digital audio disc. After a year of experimentation and discussion, the taskforce produced the Red Book, the Compact Disc standard.

Philips and Sony corporations joined forces to coproduce the CD-DA (Compact Disc-Digital Audio) standard. Philips had already developed commercial laserdisc players, and Sony had a decade of digital recording research under its belt. The two companies were poised for a battlethe introduction of potentially incompatible audio laser disc formatswhen instead they came to terms on an agreement to formulate a single industry-standard digital audio technology.

1981- The first test CD was pressed in Hannover, Germany by the Polydor Pressing Operations plant. The disc contained a recording of Richard Strauss‘s Eine Alpensinfonie, played by the Berlin Philharmonic and conducted by Herbert von Karajan

August 1982- the real pressing was ready to begin in the new factory, not far from the place where Emil Berliner had produced his first gramophone record 93 years earlier.

Oct 1,1982- The first album to be released on CD was Billy Joel’s 52nd Street, that reached the market alongside Sony’s CD player CDP-101 in Japan

March 2, 1983- CD players and discs (16 titles from CBS Records) were released in the United States and other markets.

June 1985- the computer readable CD-ROM (read-only memory) and, in 1990, CD-Recordable were introduced, also developed by both Sony and Philips

The first artist to sell a million copies on CD was Dire Straits, with its 1985 album Brothers in Arms

The first major artist to have his entire catalogue converted to CD was David Bowie, whose 15 studio albums were made available by RCA in February 1985, along with four Greatest Hits albums.

Album artwork is a very crucial part in a music release because not only will it give the initial impression of what the music is going to be like, it also establishes the identity of the musician. And especially now that people prefer to stream or download, it’s an added bonus if you have a […]

With the rising popularity of Internet downloads, youtube, and piracy, CD sales is affected significantly. It is important to save every penny in the CD manufacturing costs in order for your music to thrive in this tough market. There are plenty of ways to do cut down your CD Manufacturing expenses without compromising the quality […]