This DVD packaging of Reservoir Dogs is as cool as the film and the director. It’s made of a tin case that is made to look like a thin gasoline can and it contains 2 DVDs. Some DVD box sets are too elaborate. Too many random stuff placed in a big box and sold at very high prices. I notice most of the over-the-top packaging have no solid concept. Some DVD box set are just, well…too boring. We see lots of this. I need not elaborate this. But this is just right. Cool, clean, suave. 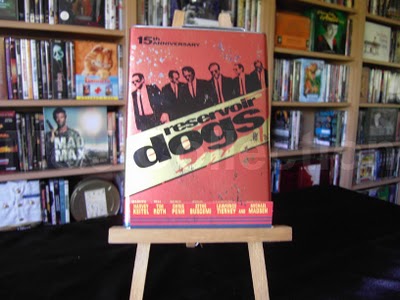 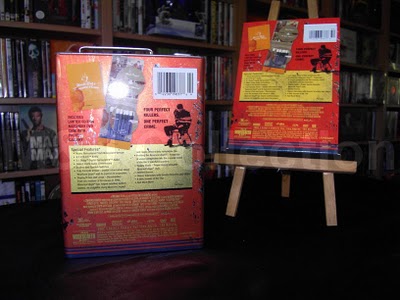 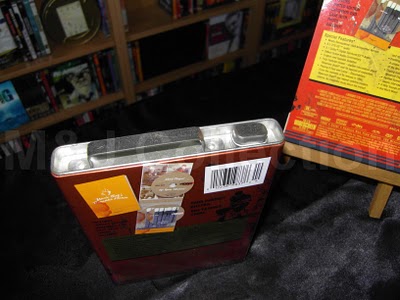 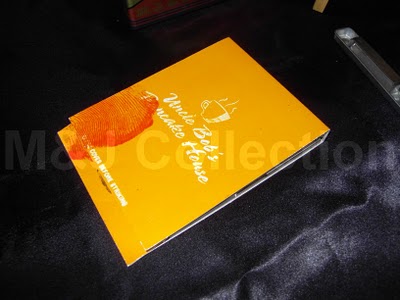 Reservoir Dogs transformed Quentin Tarantino practically overnight from an obscure, unproduced screenwriter and part-time actor to the most influential new filmmaker of the 1990s. The story looks at what happens before and after (but not during) a botched jewelry store robbery organized by Joe Cabot (Lawrence Tierney). Mr. White (Harvey Keitel) is a career criminal who takes a liking to newcomer Mr. Orange (Tim Roth) and enjoys showing him the ropes. Mr. Pink (Steve Buscemi) is a weaselly loner obsessed with professionalism. Mr. Blonde (Michael Madsen) has just gotten out of jail after taking the rap on a job for Cabot; he’s grateful for the work but isn’t the same person he used to be. While Mr. Blonde goes nuts during the heist, the thieves are surprised by the sudden arrival of the police, and Mr. Pink is convinced one of their team is a cop. So who’s the rat? What do they do about Mr. Blonde? And what do they do with Mr. Orange, who took a bullet in the gut and is slowly bleeding to death? Reservoir Dogs jumps back and forth between pre- and post-robbery events, occasionally putting the narrative on pause to let the characters discuss such topics as the relative importance of tipping, who starred in Get Christie Love!, and what to do when you enter a men’s room full of cops carrying a briefcase full of marijuana. ~ by Mark Deming, Rovi

Don’t you just miss watching old campus flicks like Jawbreaker, Bring it On, Sorority Boys, and 10 Things I hate About You? Oh I love, love, love campus flicks even now that I’m more than a decade older. They remind me of my younger, more vulnerable years! I remember my friends and I used to […]

Capture a Lifetime of Memories With DVD Duplication in Los Angeles

If you were to ask a group of people what comes to mind when they think about California, you would probably have the vast majority respond with some answer surrounding Hollywood or the film industry. With its global reputation, it is no wonder why this has become one of the calling cards of the state. […]