Last year, Best Buy decided to stop selling CDs partly due to record labels’ increasing reluctance to even issue them. Both choices are symptoms as well as causes of a seemingly inevitable trend: Buying music is now going out of style nearly as fast as streaming music is rising. We kinda know this a decade ago, right? Nothing new here. Of course, we go digital all the way!

Yes, going digital all the way seems like the smartest thing to do. Everyone kinda knows this. However, what matters more is the actual earnings.

Although it might be a smart move for big labels to stop releasing CDs, for smaller indie musicians, it is still wiser to release music in physical format before going the digital route. No, this isn’t just sales talk because we are a CD/Vinyl company, this is based on a report by Forbes titled: Physical Albums Sell Significantly Better Than Digital Ones

It says there that:

As has been the case for several years now, vinyl remains the one format of music that must be bought outright that continues to grow my any noticeable measure, though it’s still not responsible for much money pouring to the industry. Vinyl sales increased by fewer than 1 million copies in 2017, and total purchases now stand at just over 15.5 million.

So what does this mean, dear friends? Well…it means that although it seems like selling physical albums is a total waste of money in this day and age, it really isn’t. Wait no, It absolutely isn’t!!!

As a matter of fact, it can bring you MUCH MORE MONEY not just on physical sales but also on streaming sales (which you will eventually do, of course).

Allow us to introduce to you our client, TOM Mcdonald. I’m sure you’ve heard of him and if you haven’t, you should check him out on Youtube. Tom is a Canadian rapper now based in LA. He releases his awesome music videos on Youtube.

BUT before that, he would sell a limited number of physical albums and merch on his website first. 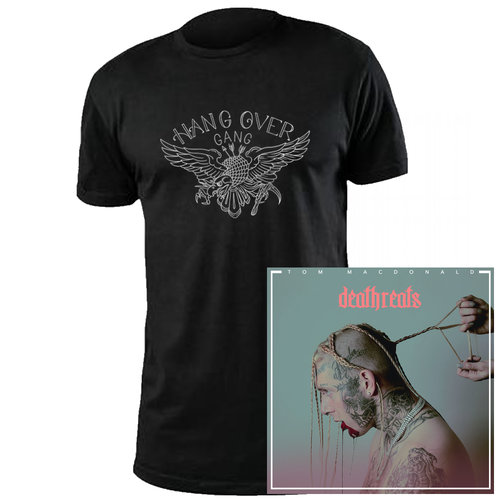 Why do you think he does this? Here are just two reasons:

If you have an album coming out and you’re contemplating whether it’s still worth it to do physical albums like CD/Vinyl/USB, please do. People still buy them!

The best thing is to do a limited number of physical albums, charge $20.00 (like Tom MacDonald), then once you think you have sold all the physical copies…that’s the time you release your music to the digital platforms. Tom sells his CDs for $20, which he pays us for a dollar or less per unit. Imagine how much more money you’ll make. Seriously!

Besides, what are you going to sell on your  gigs and tour if you don’t make those CDs?

8 Reasons Why You Should Still Send CD Portfolios

Here are some reasons why you should still send out CD portfolios even if you already have an awesome website: It makes the recipients feel important. When they receive your good-looking CD portfolio, they’d feel special because you actually looked for their addresses and gave them something valuable. When I say valuable, I mean 1. it has […]

We want to market ourselves as freelance artists and we want to market our works. However, when the opportunity strikes for us to introduce ourselves to an individual or to a crowd, we fumble and only manage to let out a soft squeal. Or, when we’re not shy, we’re too scared that we’re sharing so […]